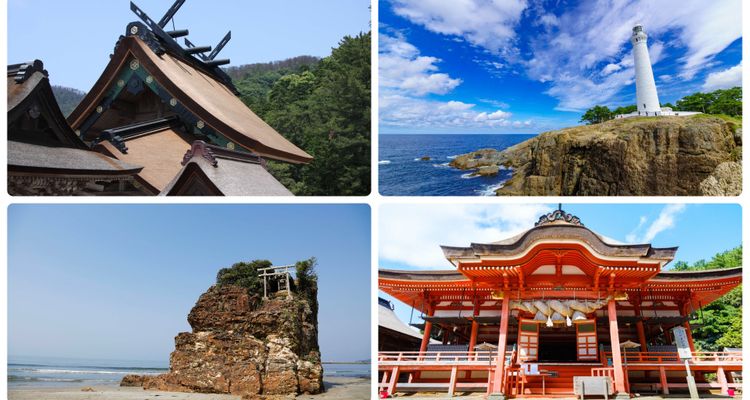 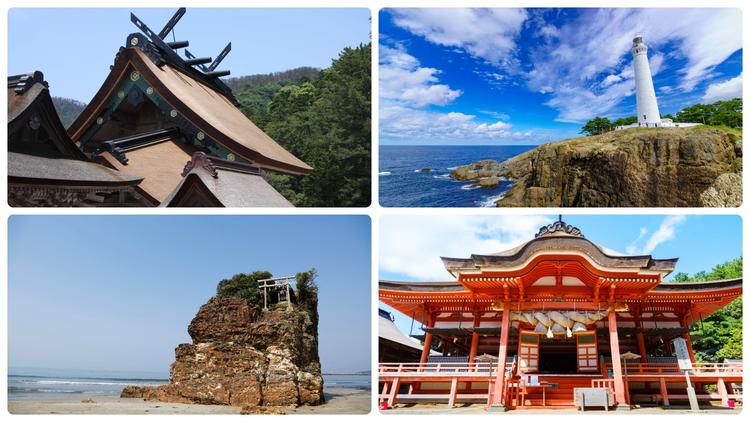 Izumo City: Forge Connections and Find Luck in the Homeland of Japanese Mythology

Known as the “Homeland of Japanese Mythology,” Izumo City in Shimane Prefecture is especially popular among history buffs for its numerous historical and cultural heritage sites like Izumo Taisha Grand Shrine, said to bring worshippers luck in matchmaking and romance. These sites beautifully intertwine with the rich and varied natural environment of the area. In this article, we’ll introduce five amazing spots around Izumo that all visitors should put on their itineraries! Whether it's your first time in Japan or the hundredth, Izumo City is a great place for learning more about Japan’s roots.

*This article was written in collaboration with Izumo City.

Izumo is a city situated in eastern Shimane Prefecture in the Chugoku region of Japan. The Shimane Peninsula lies to the north of the city, while the Chugoku Mountains rise in the south, with the Izumo Plain sandwiched between them. Blessed with rich and varied natural landscapes, from the ocean to mountains, plains, rivers, and lakes, the city offers gorgeous views all year round as well as scrumptious cuisine made from seasonal, local ingredients.

Izumo also happens to be home to many spots that have appeared in Japanese mythology, hence why it’s sometimes called the “Homeland of Myths” or the “Land of the Gods.” Because the city is dotted with numerous spots and cultural treasures with strong ties to Japanese folklore and traditions, such as Izumo Taisha Grand Shrine, a visit to Izumo is bound to yield a deeper understanding of the Japanese people and their culture.

Izumo is easily accessible from most of Japan’s major cities thanks to Izumo Enmusubi Airport. It takes just 1 hour and 30 minutes to reach Izumo from Tokyo, and 1 hour from Osaka or Hakata. From the airport, it’s just a 30-minute bus ride to Izumoshi Station.

Have you ever thought about what exactly is considered a part of Japanese mythology? Japanese people attribute the term to all tales about deities and gods written in such materials as the “Kojiki” and “Nihon Shoki,” which are chronicles compiled sometime in the 8th century, or the “Izumo no Kuni Fudoki,” a collection of reports on each region of Japan listing the origins of their names, local production, folklore, and so on.

Among these stories, the ones that take place in Izumo are simply called the “myths of Izumo.” Many are quite famous, such as the one about the slaying of a giant serpent by Susanoo-no-Mikoto, the younger brother of Amaterasu Omikami, or the creation and transfer of rulership of the nation of Japan by his descendant, Okuninushi-no-Mikoto.

Let’s take a look at several spots in Izumo City with deep ties to Izumo mythology.

Izumo Taisha Grand Shrine: The Symbol of Izumo and the Homeland of Myths

No visit to Izumo would be complete without a stop at Izumo Taisha Grand Shrine, considered a symbol of the city! The main deity enshrined here is Okuninushi-no-Mikoto, who plays a major role in Izumo mythology and is widely known as the god of matchmaking.

Izumo Taisha Grand Shrine has a long history. According to the Kojiki, Japan's oldest history book compiled in the 8th century, the shrine was built for Okuninushi-no-Mikoto in return for the land he had cultivated and given to Amaterasu Omikami.

The site’s current main hall was constructed in 1744 in the "taisha-zukuri" style, the oldest shrine architectural style in Japan. The 24-meter-tall building is a National Treasure as well as the largest Shinto structure in the country.

Don't miss out on seeing the "oshimenawa" giant sacred rope hanging on the front of the Kagura-den Hall where prayers, weddings, and other rituals are held. Said to be one of the largest in Japan, the rope is 13.6 meters long and weighs a stunning 5.2 tons. It’s replaced once every few years, with each new rope taking over a year to make!

Izumo Taisha Grand Shrine is also known for its unique method of worship. At most Shinto shrines, you bow twice, clap twice, and then bow once more. At this shrine, however, the proper way is to bow twice, clap four times, and then bow again. When visiting, take a look at how others are praying and follow their lead.

There are many other spots on the grounds of Izumo Taisha Grand Shrine where you can feel its deep connection with the world of myths, like Soga no Yashiro, a shrine dedicated to Susanoo-no-Mikoto who famously defeated the giant serpent Yamata-no-Orochi. There is also the Jukusha, the place where many gods from all over Japan gather together in October of the lunar calendar.

Other interesting features of the shrine are the rabbit statues dotting the premises, which is a reference to the Hare of Inaba myth where Okuninushi-no-Mikoto plays a prominent role. If you ever get the chance, visit Izumo Taisha Grand Shrine and dive into the world of Izumo myths!

Inasa Beach: A Power Spot Where Gods From All Over Japan Gather

Situated around 1 kilometer west of Izumo Taisha Grand Shrine, Inasa Beach is a gorgeous scenic spot that curves southward and is known for its white sands. Its beautiful visage earned it a spot on the list of the top 100 beaches in Japan.

There's another large rock on the beach named Bentenjima. On top of it, there is a small torii gate and a shrine venerating Toyotamahiko-no-Mikoto, the deity of the sea.

Every November (October in the lunar calendar), the "Kamimukae Shinji" takes place when gods from all over Japan are said to gather on Inasa Beach. Lunar October was once also called "kannazuki," meaning “the month when the gods are absent.” This name is still used in Izumo, where the gods gather at Izumo Taisha Grand Shrine.

Nagahama Shrine: Attract Good Luck at This Place of Worship with Close Ties to Izumo’s Beginnings

Nagahama Shrine is dedicated to Yatsukamizuomitsunu-no-Mikoto, the grandfather of Okuninushi-no-Mikoto, the deity enshrined at Izumo Taisha Grand Shrine. The Nagahama deity is also the main character of The Legend of Kunibiki from the Izumo no Kuni Fudoki.

The Legend of Kunibiki tells the tale of when Yatsukamizuomitsunu-no-Mikoto expanded the area of Izumo, which he felt was far too small at the time, by pulling additional land across the sea to Izumo with a rope. According to the legend, the stake and rope used to attach this new landmass to Izumo became Mt. Sanbe, situated in central Shimane Prefecture, and the coastal line of Inasa Beach, respectively.

Isn't that fascinating? Visit the shrine connected to Izumo's beginnings and see if you can attract some good luck your way!

Hinomisaki Shrine is located a 15-minute drive from Izumo Taisha Grand Shrine and venerates two main deities from Japanese mythology. It’s said that while Ise Grand Shrine protects Japan during the day, Hinomisaki Shrine looks after the country at night. The shrine’s two main halls are Hishizumi-no-Miya and Kami-no-Miya, which respectively enshrine Amaterasu Omikami and Susanoo-no-Mikoto, the ancestor of Okuninushi-no-Mikoto. The shrine is visited by many people for its ability to ward off evil and bestow good luck in matchmaking.

The current shrine main building was constructed in 1644 in the "gongen-zukuri" style where the main hall and worship hall are connected. Painted in a vivid vermilion color and luxuriously decorated, it was designated as a national Important Cultural Property in 1953 for preserving an important part of the early Edo Period (1603 – 1867).

When visiting Hinomisaki Shrine, do not miss out on its sand charms said to ward off evil. Only a limited number of the amulets are available each day, so if you get the chance, be sure to buy one! Hinomisaki is located right next to the aquamarine Sea of Japan, so you can take a pleasant stroll after visiting the shrine.

Izumo Hinomisaki Lighthouse: This Chalk-White Tower Is the Tallest Lighthouse in Japan!

Its light reaches as far as 40 kilometers out to sea, and even now, more than 100 years since its construction, the tower continues to watch over ships navigating the Sea of Japan. It’s possible to tour the lighthouse and climb its 163-step spiral staircase to get a panoramic view of the Sea of Japan and the Shimane Peninsula.

There is a boardwalk along the coast near the lighthouse, so visitors can also enjoy walking around the area while listening to the sound of waves crashing against rocks. The coastline with its uplifted bedrock, strangely-shaped columnar rocks, and precipitous cliffs is a can’t-miss sight!

Hinomisaki, sometimes known as Cape Hino, is also a well-known scenic sunset spot that has been designated as a Japan Heritage site. There's nothing more romantic than watching the sky turn a deep red as the sun sinks into the Sea of Japan over Hinomisaki.

There are many more spots where you can truly feel close to the world of Japanese mythology and discover new connections within the city of Izumo! We hope to see you there many times in the future!

For more sightseeing information on Izumo City, check out the city’s official website and social media pages, which get regular updates!