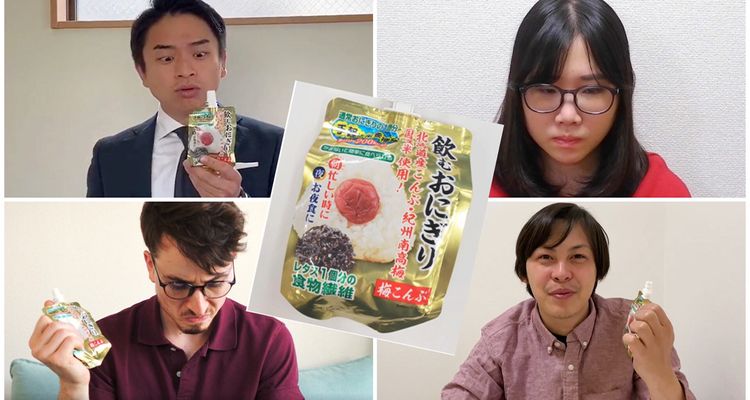 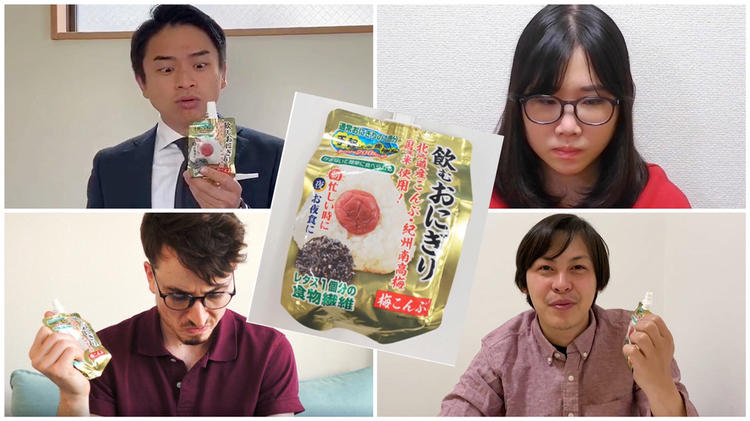 Drinkable Japanese Rice Balls Are a Thing. Why? Your Guess Is As Good As Ours

Onigiri (rice balls) are a popular Japanese snack that you've almost certainly seen before. We love onigiri and eat them regularly, so were intrigued to find out about a drinkable version. What does a drinkable rice ball look and taste like, you might wonder? Read on to find out more and see what we thought about it.

Drinkable Rice Balls? What Does That Even Look Like?

Drinkable rice balls, or "nomu onigiri" as they are called in Japanese, come in a plastic pouch similar to those used for Japanese vitamin jelly snacks. The consistency of the contents is similar to a watery porridge and can easily be sucked out of the tube at the top of the pack. According to the packaging, one drinkable onigiri has the caloric equivalent of 1.5 normal onigiri and the dietary fiber content of 3 heads of lettuce! Also, the shelf life is three months at room temperature, which is considerably longer than the 1-day shelf life of a typical onigiri.

What Types of Flavors Exist?

At the time of writing, there are two flavors of drinkable onigiri available: Ume Kombu (pickled plum and kombu seaweed) and Ume Katsuo (pickled plum and dried bonito fish flakes). We purchased the Ume Kombu flavor as it happened to be the only flavor in stock online. It should be noted that several of the most popular onigiri flavors, such as salmon and tuna, contain fresh fish. It seems unlikely, however, that those types of flavors will be made into a drinkable onigiri anytime soon.

How Is the Taste?

According to a Japanese Person

"Whoa, the kombu and pickled plum smell is intense! Woo, that's quite a flavor. It would probably take a while to get used to the flavor, but if I did... I think it could be delicious..?"

"Why do the Japanese come up with this kind of stuff? It has a strong plum smell, a little bit sour. Actually, I kind of like it! The plum is really strong and I could feel some rice! They didn't lie on their packaging, there's rice! And pieces of plum and kombu. It's pretty delicious! I'd eat the whole thing."

"It smells very sweet like honey and...rotting grass? The taste is very sweet with sourness from the pickled plum and hints of kombu. The rice is a problem, though. It seems to have been purposefully undercooked since they knew it would be sitting in liquid. The result, though, is that the outside is mushy and gross while the inside is still too hard. Overall, it's somehow too sweet and too salty at the same time."

"The outstanding taste is sourness from the pickled plum with the kombu's texture. As for the rice, it's watery. Like a sweet and sour liquid with chewy rice bits that are a bit crumbly. It tastes undercooked. I don't really feel like I'm eating onigiri. It's more like eating something I've never eaten before. It's a new innovative Japanese idea, that's for sure. If you want to try one, you can find it in Japan... but I don't recommend it!"

Why Would Anyone Make Such a Thing?

On the drinkable onigiri pack, the words "for busy mornings" and "for a light dinner" are written as suggestions of times when people might choose to enjoy a drinkable rice ball. Indeed, grab-and-go meal options are very popular among Japan's working class, who often don't have time to spare for preparing meals in the morning. However, onigiri themselves are quite grab-and-go-friendly, which is part of the reason they are some of the most popular items at convenience stores. Having tried the drinkable onigiri for ourselves, it seems fair to say that all of us (minus Ren from Taiwan, perhaps) would rather eat the real thing. Maybe the drinkable onigiri is designed to be purchased in bulk by those who don't even have three spare minutes to dash into a convenience store and grab an onigiri on the way to the work? Your guess is as good as ours.

Where Does One Purchase a Drinkable Rice Ball?

As noted above, we bought our drinkable onigiri online. This is probably the best bet for anyone who is curious to try one, as it doesn't seem to be consistently on sale at supermarkets. The company behind the product is called Yoko Daily Foods, which happens to have a food theme park of sorts featuring a free all-you-can-eat buffet of their products. "Konyaku Park" as it is called, is located in the mountains of Gunma Prefecture, between Tokyo and Nagano, and the drinkable onigiri can also be purchased from the shop there. Unfortunately, however, it seems to be a bit tricky to get for anyone who lives outside of Japan.

Drinkable onigiri seems unlikely to become a big thing in Japan, but who knows? Try one out for yourself next time you get a chance and see what you think. If you're interested in learning more about real onigiri, check out our guide to convenience store onigiri.