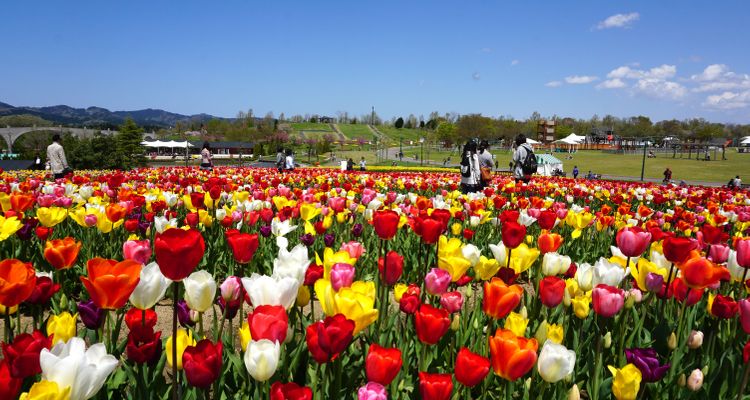 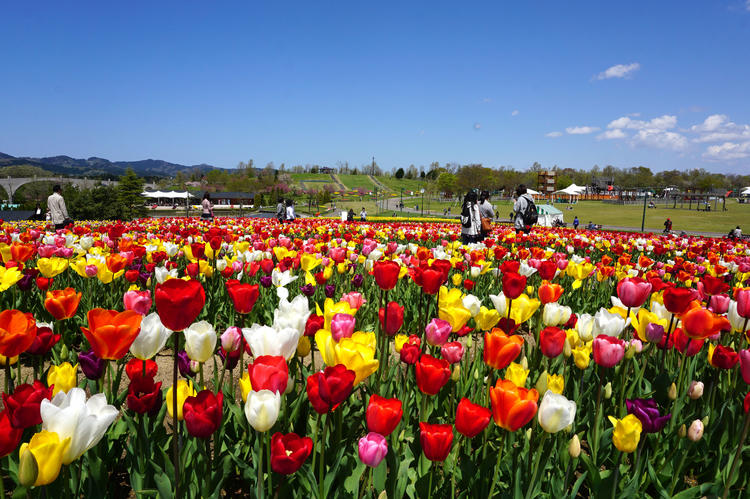 “Flower viewing” is one of the most popular reasons to visit Japan. With a plethora of magnificent, colorful flowers blooming each season, Japan is a nature-lover’s paradise with photo opportunities around every corner. In this article, we’ll showcase three lesser-known yet jaw-droppingly beautiful Japanese flower gardens in Niigata Prefecture!

Despite the spacious 400 ha grounds, Echigo Hillside Park is always packed with locals addicted to its beauty. Complementing the wealth of seasonal flowers is a playground, waterpark, sports facilities, and more, making it ideal for picnics and other recreational activities.

However, the highlight of Echigo Hillside Park is undoubtedly its flower gardens, which evolve majestically throughout the seasons. From spring to summer are hydrangeas and a profusion of tulips in red, white, yellow, purple, and more, all blooming simultaneously.

Between late May and mid-June, the “Fragrant Rose Festival” is held, treating visitors to an array of rose varieties with dazzling colors and delicate petals.

Once summer arrives, breathtaking sunflower fields become the highlight of the park. During nights in August, a “grass sledding field” and “musical water fountain” are also illuminated in a special light-up presentation, weaving together an unforgettable display of light and sound.

In autumn, the gardens boast fields of multicolored cosmos as far as the eye can see, while January and February see the park transform into “Echigo Snow World,” with cross-country skiing, sledding, snowshoeing, and other winter activities safe and suitable for beginners.

From February, visitors can also bask in the beauty of Christmas roses and hepatica. Indoor potted plant exhibitions are held from February to March, while late March to mid-April is all about the budding of fresh outdoor flowers!

Within the park are several recreational facilities, including the “playground area” and “waterpark,” making for an exhilarating, fun-filled day out for families in summer.

Naturally, the park is full of nature walking trails passing through each section, encouraging visitors to uncover the best photo spots. The height of this is the Observation Deck, which boasts sweeping panoramas of the Echigo Plain and Shinano River spreading out under the clear blue sky!

There are also cafes and restaurants for a sit-down meal in between walks. Or, for the more outdoorsy, BBQ spaces allow casual outdoor cooking, with rentable gear allowing you to turn up virtually empty-handed!

Alongside BBQ equipment, you can rent wheelchairs, tents, golf gear (both right and left-handed), and even small car-shaped bicycles that children can drive! However, keep in mind that equipment is limited, so we recommend inquiring with the park in advance.

While some may wonder how they’ll be getting around in such a massive park, fear not! Echigo Hillside Park has its very own free-to-use bus stopping at eight spots within the park. There is one bus service per hour, which takes roughly one hour to tour the entire park. Even from within the bus itself, visitors can comfortably and efficiently take in the park’s seasonal splendor!

Generally, the Echigo Hillside Park bus operates only on weekends and public holidays.

*Bus capacity is 21 passengers. One of the two available buses can accommodate two wheelchairs.

*Depending on park conditions, the bus arrival/departure location, schedule, and ride duration at the Midori-no-Senjojiki area may change.

Echigo Hillside Park also requests that visitors cooperate in measures to ensure hygiene and safety. This particularly includes cleaning up after and bringing home waste from pets and service animals (guide dogs, etc.), and keeping them on a lead at all times. If an incident involving an animal does occur, the owner will be responsible for handling it.

For those hoping to see as many flowers as possible, we recommend heading up to the Echigo Hillside Park Observation Deck, where the all-encompassing views are utterly breathtaking. With rose festivals, after-dark illuminations, music festivals, snow activities, and more, there’s loads to see at Echigo Hillside Park, so make sure to plan your visit with a season that suits your interests!

The nature-rich town of Tagami sits roughly in the center of Niigata Prefecture, and has an area of around 31.71 km² and a population of approximately 10,000 residents. Within Tagami is the 274-meter-high Mt. Gomado-yama, whose summit is reachable via a 40-minute hike. At the summit is the Gomado-yama Hydrangea Garden, which boasts around 30,000 hydrangea plants that bloom during Japan’s rainy season (late June - early July).

Within the park’s collection are hydrangea flowers colored blue, pink, white, purple, and more, and even include species cultivated in France! One type of hydrangea that you should keep an eye out for is the “gaku-ajisai” (lacecap hydrangea), seen in the bottom-left of the photo above. The small bud-like petals are clustered around the center, surrounded by a petal-like blooming calyx. The crown-like “seiyo-ajisai” also peaks at this time, further coloring this flower-lover’s paradise!

Within the park is a walking trail that takes you through the thick cluster of hydrangeas. While the roughly 40-minute hike to the top may be a tad tiring, panoramas of the Echigo Plain, Sado Island, and even the distant Awashima Island will doubtlessly reinvigorate you!

The Gomado-yama Hydrangea Garden is open all day, all year round. Generally, the hydrangea flowers peak between late June and early July, coinciding with the “Hydrangea Festival,” which includes events like concerts, photo contests, limited-edition goods available for purchase at the Roadside Station Tagami, and much more!

When visiting the park, we recommend wearing long sleeve shirts and sneakers as sandals are not suitable for the hiking course. Also, be sure to bring plenty of water, refreshments, and even items to keep cool to avoid heat stroke.

In addition to the hydrangea park, the area boasts famous local ramen restaurants, day-trip hot spring facilities, and more, so leave extra time to indulge yourself and wipe away the mountain climbing fatigue.

Onogame, shown on the left in the photo above, is an enormous, 167-meter-tall slab of rock projecting into the sea. It is located on Sado Island, the largest island off the Sea of Japan coast, sitting to the west of Niigata Prefecture. Onogame was awarded two stars in the Michelin Green Guide Japan for its stunning scenery appearing like a work of art.

One additional highlight at Onogame are the fields of yellow “tobishima-kanzo” (a species of daylily), of which between 500,000 to around a million bloom in late May and early June. They appear most magnificent when illuminated by the golden setting sun, making it worthwhile sticking around until the evening.

Also, on the 2nd week of June each year, the “Sado Kanzo Festival” is held, featuring must-see performances of traditional local folk music and “demon” taiko drumming backed by the blue ocean and yellow flower fields.

For those spending the night on Sado Island, accommodation is plentiful - including historical ryokan inns with sunset vistas, quirky local guesthouses, and more. If visiting between mid-July and mid-August, you’ll also be welcome to swim at the picturesque Futatsugame Beach, which has lifeguards on duty between 10 am and 4 pm, along with drinks, bread, and snacks at the beach stores.

In addition to some of the best sunsets you’ll ever witness, Sado Island is rich in hot springs, restaurants serving authentic Japanese cuisine like delicious “kaiseki ryori,” and other unique experiences tempting visitors to hop over to this lesser-explored part of Niigata Prefecture.

A World of Flowers in the Gorgeous Gardens of Niigata Prefecture!

Each of the three flower gardens of Niigata featured in this article has its own distinctive beauty unseen elsewhere in Japan. After having your fill of flower viewing, there are countless fantastic additional attractions within and nearby, along with all kinds of accommodation and more, providing an exciting, refreshing way to explore the charms of Niigata. If you’re including Niigata Prefecture on your next Japan itinerary, definitely be sure to pop by a flower garden or two!