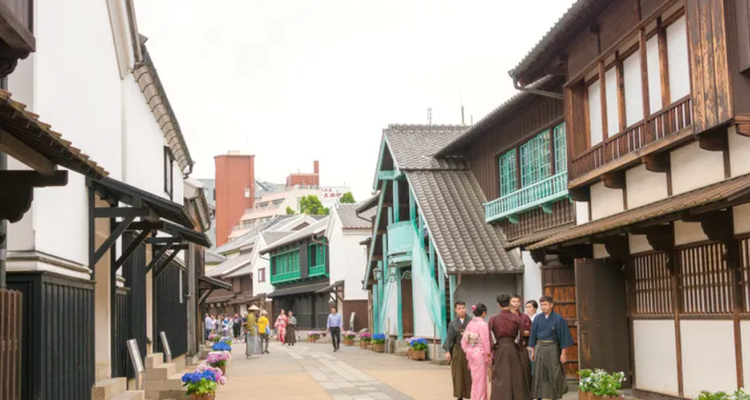 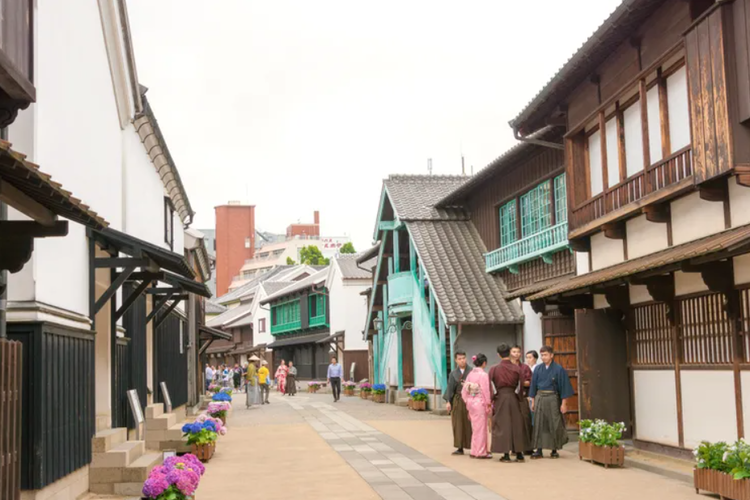 Dejima: Isolationist Japan's Only Connection to the Outside World

Did you know that Japan was once completely shut off from the rest of the world, for a period of 218 years! During that time, foreigners were only allowed to set foot on one place, a man-made island called Dejima in Nagasaki Bay. Due to its status as a trading port, Dejima adopted elements of western culture, and to this day has an eclectic mix of Japanese and western architecture. Today, it stands as part of the prefecture and as a reminder of the rare, historical intercultural interaction between Japan and the West, attracted many visitors from both Japan and overseas. This article will delve into the history and cultural significance of Nagasaki’s Dejima, a reminder of Japan’s isolation period.

Dejima is located in modern-day Nagasaki City, near the city center and right by Nagasaki Bay. Although now an integrated part of the mainland, Dejima was originally an island, man-made at that, and was established as a port for the restricted amount of trading that was allowed between Japan and the Portuguese. Dejima was historically famous for its fan shape, executed brilliantly by the workers who constructed the island.

It was designated as a National Historic Site by the Japanese government in 1922, and in 1951 was declared as a public restoration project, which is continuing even today. It has long been a popular tourist destination, showing a rare glimpse into the lives of European merchants in Japan hundreds of years ago.

The History of Dejima

The concept for Dejima was established by the shogun (feudal lord) Tokugawa Iemitsu, allowing profitable trade while being able to control the spread of European culture and religion across Japan. Construction of the island was completed in 1636, and Portuguese merchants and other officials were allowed to set up shop on the island, although they were not allowed to venture outside of Dejima. Likewise, Japanese people were not allowed onto the island unless given permission for specific tasks or business.

The island was also called “Tsukishima,” meaning “erected island,” and was made with reclaimed land from the harbor. Although a confined area, international exchange flourished on Dejima, and not only goods but Western knowledge was imported as well, such as medicine, chemistry, navigation, and weaponry. Japanese scholars would even make their way to Dejima to study.

As most Europeans and other non-Japanese were not allowed further than Dejima, many took up residence on the island, introducing elements of their home cultures to make their quarters feel more like home. While there were people from several occupations such as merchants and physicians, most of the people were connected to the Dutch East India Trading Company and were sent to Dejima to assist with operations. This brought about an eclectic and fascinating blend of cultural aesthetics, with European architecture and interior decor playing elegantly with traditional Japanese design. However, worried about the spread of Christianity, the Tokugawa shogunate expelled the Portuguese from Japan in 1639, awarding the Dutch and those associated, who had gained favor through loyalty, a monopoly over trade and Dejima.

The isolationist period in Japan, also known as “sakoku,” began under the Tokugawa shogunate with orders from Tokugawa Iemitsu. Five Sakoku Edicts were implemented from 1633 until 1639 and were mainly tailored towards Europeans, stating the following:

Edict 1: Travel overseas was forbidden unless it was a trading vessel licensed by the Tokugawa shogunate (1633)

Edict 3: Japanese people were forbidden from traveling overseas, Japanese citizens living abroad could not return to Japan, and the construction of large ships was forbidden (1635)

Edict 4: The Portuguese were allowed only into Dejima (1636)

Edict 5: The Portuguese were not longer allowed to travel to Japan (1639)

For several years, the Dutch had settled on the Nagasaki outer island of Hirado, the Dutch East India Trading Company even establishing the Hirado Dutch Trading Post, but in 1641 they were ordered to pack up and relocate to Dejima, solidifying the Sakoku policies and effectively isolating most of Japan from the rest of the world. There were several calls from other countries such as the United States and France requesting for Japan to once again open itself to trade and other exchanges, but Japan would continue to refuse. The Isolationist Period remained in effect for 218 years until 1853, when Commodore Matthew Perry arrived in Japan with his infamous black ships and forcibly reopened the country to the rest of the world.

Dejima After the Isolationist Period

The iconic fan shape was lost in 1904, almost fifty years after the sakoku period was abolished, due to a prefectural harbor reclamation project in order to construct a promenade, and Dejima became attached to the Nagasaki mainland. The Dutch East India Trading Company had also been absolved, and many of the buildings were repurposed, such as the Dejima Dutch Factory being turned into a Consulate.

Dejima had been absorbed into the Nagasaki Foreign Settlement, and the topography of the island was drastically changed to make the island more friendly to international trade. Although much of the Dejima landscape was changed during this time, there are buildings that are still standing and have been for over 100 years, including the Former Dejima Protestant Seminary which was constructed in 1878, and the Former Nagasaki International Club building which was built in 1903.

Dejima is no longer an island, and is instead now connected to the Nagasaki mainland. Even so, the feeling left in this small stretch of land is reminiscent of the times when it was the only location where Japanese and foreigners could mingle. Several old buildings remain or have been reconstructed, and although in the middle of the bustling Nagasaki City, it retains its quiet, regal atmosphere. A large gate called the “Sea Gate,” with traditional Japanese architecture, stands as the entrance to Dejima. This is both appropriate and symbolic, as it historically acted as the gateway to commercial and scholarly exchange back when Dejima was a trading post.

Nagasaki Prefecture has been working on restoring Dejima since 1948, and several buildings have been recreated as recently as 2016. These include historically and architecturally significant buildings including the popular Dutch Chief Factor’s Residence or the “Kapitan Room,” which is the largest building on Dejima with an interior decorated with stunning European furnishings. Many of the buildings can be explored, allowing you to see the contrast of the interiors and exteriors as well as get a glimpse into the lives of the residents back in the day. According to the long-term restoration plan, there will even be attempts to restore Dejima’s original fan shape.

The buildings are mostly constructed from dark wood which contrasts beautifully against the traditional Japanese white walls, but a unique addition is the blue-green trim that decorates many of the exteriors. Originally, this paint was imported by the Dutch, and is one of the prime examples of the blend of Dutch and Japanese cultures, as it often was used on Japanese-style carpentry such as handrails. Be sure to walk past and through the buildings to observe all the fascinating nuances! You can even dress up in kimono and pretend you are back in the olden times while taking beautiful pictures!

Visit Dejima and Step Back in Time

Dejima was an integral part of Japanese history, and to this day shows the fascinating effects of Western influences when introduced to Japanese culture. Being able to walk in and out of the buildings adds an extra layer of immersion to the experience. Be sure to check out Dejima whenever you are in Nagasaki, and learn about one of the most riveting periods in Japanese history!

Dejima is one of the coolest historical areas in Nagasaki, but it's not the only history-rich location hiding in Kyushu, the region that Nagasaki Prefecture is a part of. In fact, Kyushu is home to some of the best castles and other historically-significant buildings in Japan. We think you'll love what the rest of Kyushu has to offer. Check out the official Kyushu tourism website for more information on what's out there in the region.