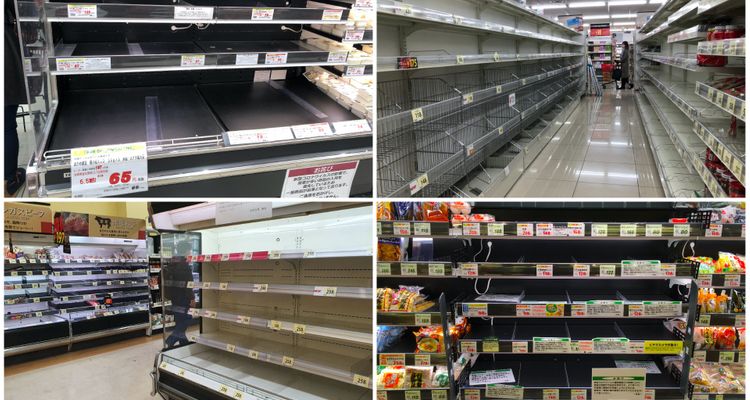 Coronavirus Panic-Buying In Japan: What’s Selling Out at Japanese Supermarkets and Why?

No matter where you live in the world, it's likely that you have recently had the experience of visiting the grocery store and finding certain items out of stock due to coronavirus panic buying, increased demand, or decreased supply. In most countries, items like milk, eggs, and meat often sell out, but what about Japan? Read on to find out which uniquely Japanese item has been selling out at grocery stores here. If you are or will be a resident of Japan, this information might come in handy for learning which items to stock up on before future emergencies.

The Japanese generally have a reputation for being quite socially-minded and thoughtful of others. However, in the face of a pandemic, Japanese supermarkets and grocery stores were not immune from panic buying and shortages of essential items, especially near the beginning of the outbreak. However, there is one very surprising food item that has been particularly difficult to get. People from other countries often find this food unappetizing due to its peculiar texture and smell, but it is widely loved in Japan and has been one of the most in-demand items during the pandemic. Can you guess what it is?

The most surprising item that was difficult to get in the midst of the pandemic, and which still regularly sells out by the end of the day, is natto. Natto, in case you've never heard of it, is cooked soybeans that have been sprayed with a type of bacteria called Bacillus Subtilis Natto, or "natto-kin" in Japanese. This causes the soybeans to ferment and form a stringy, sticky, slimy coating, and particular flavor. Natto is commonly eaten as-is, mixed with a soy sauce-based sauce and/or mustard. It's a popular breakfast food that goes wonderfully with white rice, a slice of toast, pasta, and a variety of other dishes. The sticky fermented soybeans are so popular that every Japanese grocery store has a dedicated section stocked solely with various varieties and flavors of natto.

Natto is known as an immunity-boosting food, thanks to its probiotic bacteria content (the aforementioned Bacillus Subtilis Natto). There have even been several promising scientific studies that have investigated the use of the bacterium as an antibacterial supplement for both humans and animals. Although the current outbreak is viral, not bacterial, it is still beneficial to eat foods that build up one's immune system. There are many people in Japan who eat natto every single day, and it is unquestionably a very healthy food. This is likely part of the reason why the pandemic saw an increase in natto sales.

In addition, there have apparently been various rumors floating around the web saying that the bacteria in natto could specifically work to fight the current coronavirus. Some rumors pointed to the extremely low case counts in Iwate, Ibaraki, and Yamagata Prefectures—areas with some of the highest rates of natto consumption—as evidence that there is a connection between eating natto and reduced infections. These rumors are purely speculative, however, and the Japanese Consumer Affairs Agency has warned against using this type of information for marketing.

In the above photo of the natto section at a Tokyo grocery store, the yellow-bordered sign encourages people to eat natto now because of its immunity-boosting properties while the red and blue signs remind customers that a limit of 2 per-family is in effect.

Another potential cause for the increase in natto sales could be related to a study published in a medical journal at the end of January that surveyed roughly 93,000 Japanese people to see if there was a connection between consumption of soy products like natto, miso, and tofu; and risk of death. The study found that a higher intake of natto, miso, and tofu was associated with a 10% lower risk of death compared to the control group. Respiratory disease was among the causes of death studied, so it seems that some people might have drawn a connection to the current Covid-19 disease, thinking that natto consumption could help lower the risk of death.

It’s unclear whether or not natto really has any antiviral effect, but people have nonetheless been buying more of it than usual.

What Other Items Have Been Running Short?

At the time of writing this article in early May, most items at grocery stores seem to mostly be back to normal stock levels, although empty shelves are still a common sight if you go too late in the evening. However, during the beginning of the outbreak, and around the time when a state of emergency was first declared, there were many items other than natto that would disappear quite quickly from store shelves. Most probably won't come a much of a surprise.

Toilet Paper and Other Sanitary Items

Just like in many other parts of the world, sanitary items were some of the first things to go missing from Japanese shelves when the Covid-19 crisis first started to take off in Japan. First, it was toilet paper, then tissues and paper towels, then feminine hygiene products and diapers. At the peak of panic buying at the end of February into early March, it was common for the entire isle of paper products to be completely empty. Luckily, much of the country’s sanitary items are produced domestically, so the shortage didn’t last for too long once people realized that the shelves were being restocked every day.

Japanese supermarkets have notoriously large isles filled with nothing other than instant noodles. Not only are instant noodles great as a survival food thanks to their shelf life, but they also are incredibly easy to make with nothing more than some boiling water. As many people transitioned to teleworking from home, the need to cook for oneself instead of going out for lunch or dinner likely caused many to stock up on ready-made food items like instant noodles. I think it’s fairly safe to say that many people will be putting on a few extra pounds during this period of staying home.

This will come as no surprise to anyone, as there has been a highly-publicized shortage of surgical masks around the world. However, masks have long been a normal part of everyday Japanese life, even before the outbreak of the virus. Here, people use masks for a variety of reasons, from preventing the spread of a cold, to protection from seasonal allergies, to covering one's face on a day that putting on makeup is too much of a hassle. Masks are normally cheap and very easy to buy, as they are sold at grocery stores, drugstores, and convenience stores everywhere. It was a shock to many people when masks first sold out, and for a while, many people lined up outside of stores before opening time in the hopes of getting their hands on a box of masks. It's now into May at the time of writing, and masks are still mostly out of stock, but many people have begun using homemade cloth masks instead.

Japanese people love their meat, and just like many other places around the world, meat is commonly one of the first things to sell out at Japanese grocery stores, whether during a situation like this or before a major holiday. It seems that during the recommended stay-at-home period, many people have shifted from shopping for food items at convenience stores near the office to grocery stores close to home. It makes sense, then, that the typical stock of meat would be insufficient to meet the increase in demand.

Flour, Yeast, and Other Baking Goods

Similar to other places in the world, people in Japan are spending a lot more time at home these days. While looking for ways to pass the time, it seems that many people are turning to baking. Consequently, flour and other baking goods have been disappearing from grocery store shelves at a much quicker pace than usual.

Other items that were also snapped up in a couple of waves of panic buying were alcohol-based sanitizers, rice (it's Japan, so no surprise here), pasta, bottled water, yogurt, frozen noodles, and ready-made curry and soups, among other things. There were even rumors that high-proof liquor and certain types of sake were hoarded in some places, presumably to be used as a sanitizer in lieu of the real thing. While most of these shortages didn't last for long, alcohol-based sanitizers are sold out in most places.

Thankfully, it seems like we are starting to get back to fully-stocked grocery store shelves in Japan. Maybe we'll even be able to buy sanitizer again sometime soon. For now, many of us are still staying at home and eating lots of natto.

To stay on top of the current situation in Japan, see our articles State of Emergency in Japan: Everything You Need to Know About It and Latest Information Regarding Closures and Cancellations Related to Covid-19.