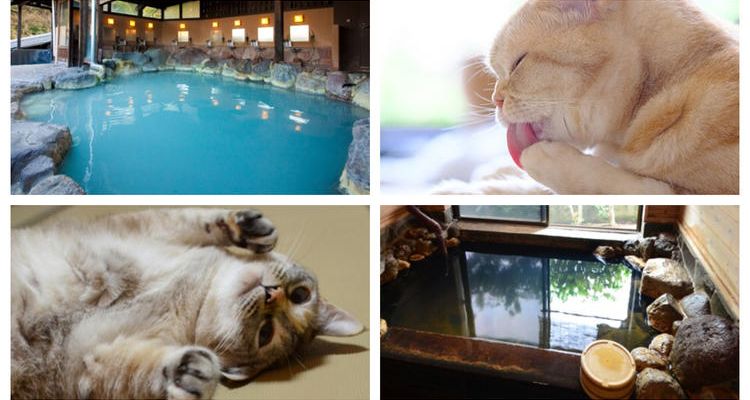 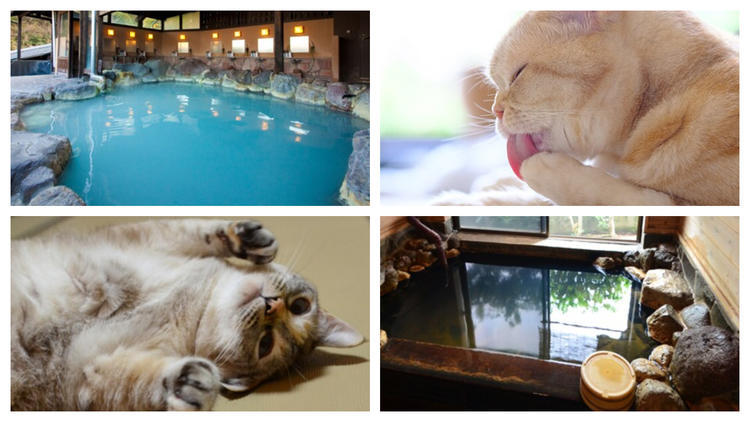 With many active volcanoes in the region, the southern Japanese region of Kyushu is full of onsen (hot spring) areas. With hot spring waters that contain as many as ten different types of minerals, this area has learned itself the nickname “Onsen Heaven.” Enjoying amazing scenery while relaxing in a hot bath is a must-do activity for any visitor to Kyushu. In this article, we will introduce ryokan (traditional inns) with steaming hot springs, breathtaking views, and even adorable cats to keep you company. Visit them to relax and heal your body and mind!

Located in Beppu, Oita Prefecture, Kannawa Onsen is the largest of the famous "Eight Hells of Beppu" hot springs, and has been a famous health spa since ancient times. Rising clouds of steam can be seen all over this area, just as one might expect from a typical onsen spot.

At Kannawa Onsen, tourists can take a dip in different types of onsen, including simple springs, chloride springs, and carbonated springs. The baths also come in many varieties like rock baths, sand baths, and open-air baths.

Located in the Kannawa Onsen area, Kannawa Yunoka is an onsen ryokan famous for its lovely cats. Its classical, romantic interior brings to mind the Taisho era (1912 – 1926) with its mix of Eastern and Western styles. You might feel lost in time when strolling the inn’s hallways. The hotel offers a public bath, open-air bath, private baths, a vintage bath and more, all of which are open 24 hours.

There are two celebrity cats at Kannawa Yunoka: Kabosu (named after a citrus fruit that is an Oita specialty), who is the mature "general manager", and Yuzu (named after another citrus fruit), the hotel's energetic "hostess-in-training". Both used to be strays before the kind hostess adopted them. Now, guests can see them working hard at the front desk every day from 8:00 am to 8:00 pm. Yuzu, the outgoing and affectionate beauty, was even named the No.1 Japanese hotel cat of 2019 on the Rakuten Travel website!

Hamawaki Onsen is another time-honored healing hot spring. Like Kannawa Onsen, it is counted among the Eight Hells of Beppu and is said to be among Beppu Onsen's original hot spring areas. The name “Hamawaki” (roughly meaning ”shoreside”) refers to how the spring water gushes out from the seashore.

Aratama Ryokan is a renowned hotel in the Hamawaki Onsen area. Not only does it have its own onsen fountainhead, it offers three kinds of private baths: rock, stone, and Japanese cypress. It also has more than 70 cat employees on the premises! Being a cat lover, the hostess has always taken in strays. Before she knew it, the place was overrun with these cute and friendly furry creatures, who by now have become the ryokan's selling point. The star among them, Miruku ("Milk"), even topped the popularity ranking of Japanese hotel cats for two consecutive years!

Even though Aratama Ryokan is home to many cats, the place is very clean and odorless, thanks to the meticulous care and management of the hostess. Guests who wish to play with the cats must first make a reservation. Then, they can pay the cat a visit in one of the three designated “cat rooms” for an hour or more. Sometimes an overnight session is available as well. If staying at a cat onsen hotel sounds good to you, Aratama Ryokan is definitely worth a visit.

Myoban Onsen, one of the Eight Hells of Beppu, is located at an elevation of 400m on the hillside of the Garandake active volcano, some distance from the heart of Beppu. Since the Edo period, it has been a major site for collecting alum. The two types of hot springs found here include a hydrogen sulfide spring and an iron spring, which can relieve symptoms of nerve pain, joint aches, and skin disorders.

Established in 1874, Onjuku Ebisuya has a three-story onsen facility called "Yuya Ebisu”, with a milky sulfur spring that's said to have skin-beautifying properties. On the first floor, there is an open-air bath where guests can take in the amazing views of Beppu Bay. On the second floor, there are various indoor bathing areas including a large public bath and massage tubs. Last but not least, a spa space with a stone spa can be found on the 3rd floor. There are also private baths for families to enjoy the hot springs together.

Onjuku Ebisuya has a resident cat named "Laimu." He sees guests off at the entrance in the morning (though he tends to slack off in the winter) or greets new arrivals in the afternoon. He will sit by the hostess' side as she attends to the guests, and sometimes he’ll even lead them to their destinations. Being something of Onjuku’s secretary, Laimu has a lot of fans on the internet. Unfortunately, his territory is confined to the hotel, so those who are just visiting the onsen without staying overnight will not be able to meet him.

Yufuin is an onsen town in Kyushu famous for its “simple spring.” With a total of 852 fountainheads, it ranks second in Japan in terms of onsen water volume. Apart from high-class onsen ryokan inns, the area is also great for sightseeing, with shopping streets like Yufumi Street and Yunotsubo Street and scenic spots like the grand Mount Yufu and the beautiful Kinrin Lake.

Situated in the Yufuin area, Waraneko no Yado is an onsen ryokan with two indoor baths and one open-air bath, both of which offer magnificent views of Mount Yufu. Guests are welcome to use the baths anytime during their stay, and taking a dip in the morning is highly recommended.

There are seven cats with distinctive personalities living at Waraneko no Yado. Some are shy while some are very affectionate. The most popular cat, Koharu, will even greet guests with a gentle kitty punch! It does not matter whether you are staying overnight, having an onsen day trip, or simply dining there because all guests are welcome to play with the cats at the Waraneko Cafe. The furry friends are incorporated into the hotel's interior design too, including the cat-shaped trays at the cafe as well as the cat-shaped clocks and cat-patterned cushions in the guest rooms. Even the stone slabs in the garden are paw-shaped! Cat lovers really shouldn’t miss out on this ryokan!

Waita Onsenkyo is a secluded onsen area loved by many. It's located at the foothills of Mount Waita, which overlooks  Kumamoto and Oita City. There are plenty of private baths here catering to both day-trip visitors and overnight guests. Bathing in the open-air onsen gives you the privilege of having the beautiful mountain views all to yourself. What’s more, the prices are perfectly affordable, making Waita Onsenkyo “the most popular tourist destination in Kyushu”, according to a poll on the travel website Jalan.

The water that pours from Horei-no-Yu’s fountainhead is sky blue in color because it contains silicon dioxide that has crystallized over the years to reflect shades of blue under the light. Here you can enjoy a private open-air bath, an indoor Japanese cypress bath, a rock bath, and a large public open-air bath. The private Japanese cypress and rock baths are coin-operated and work on an hourly-basis. For as low as 800 yen, you can rent a private bath for an entire hour. The large public open-air bath costs 500 yen, but guests staying overnight can use it for free. Moreover, tourists can bring their own foods to make jigoku-mushi using the natural hot spring steam.

Frequent visitors know all about the adorable cream-colored cat Shiro ("white") of the Horei-no-Yado inn. The chubby cat is always sleeping on the front desk and refuses to wake up when petted, always living a slow, leisurely life. Still, it sometimes helps catch bugs and chases off small animals, proving its worth as a helpful assistant of the ryokan. As word spread, more and more tourists started heading there just to meet Shiro. With such a lovely cat, a soothing spring, and stunning views, the place is indeed heaven on earth.

Kagoshima is home to many hot spring spots like the Myoken Onsen in the city of Kirishima. This is an onsen town with more hot spring inns than tourist attractions. The sodium bicarbonate spring waters here are rich in minerals and can help with cold hands and feet, relieve muscle pain and fatigue, and so on. Some spring water here is even drinkable!

Myoken Onsen is said to be the onsen area with the densest cat population in Japan. Among the 11 local onsen ryokans, seven of them keep 17 cats in total, including the white cat with heterochromia known as “Yuki" (snow), the calico cat named "Robu," "Tsubame" (swallow), "Suzume" (sparrow), and many more. They all have different personalities: some are mature, some are elegant, and some are shy. Every onsen ryokan has their own celebrity cat(s), and since they are all great places to stay at, many tourists make their choice of accommodation based on the resident furry creature.

Visit a Cat Onsen in Kyushu!

If you’re eager to escape from the hustle and bustle of city life and rest your weary body and mind somewhere peaceful (and would also like to pet some cute cats), pick any destination from our list of hot spring ryokan and start planning your next trip in Kyushu!