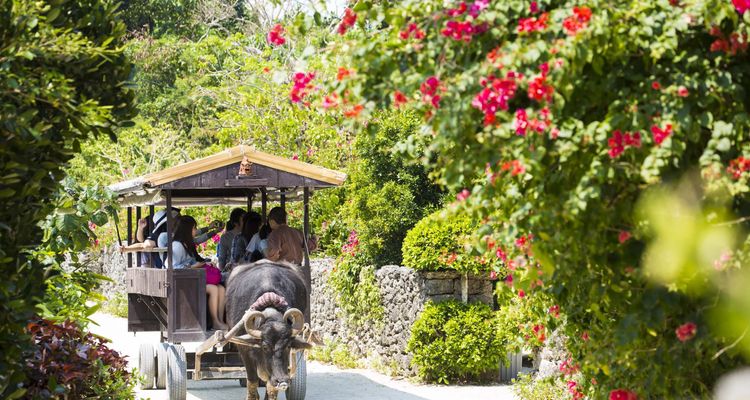 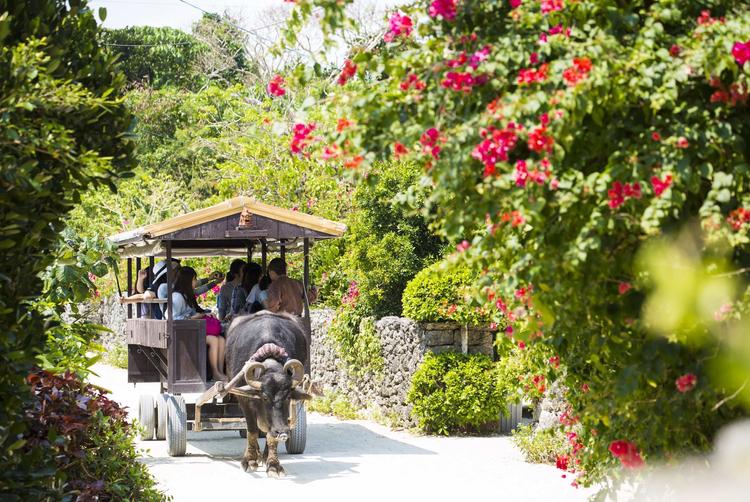 A Beginner's Guide to Okinawa: Relax in Japan’s Southernmost Islands Where Time Slows Down

Okinawa has so many wonderful things to offer! From the world-famous crystal-clear waters of the Churaumi sea, to the schools of colorful fish swimming gracefully through the islands’ coral reefs, to the unique ecosystem of the Yanbaru forest found nowhere else in the world, and the unique culture of Okinawa that emerged among all of these amazing locations. In this article, we will highlight some of the best things about Okinawa that have long enchanted visitors.

Where Is Okinawa Located?

Okinawa is a prefecture located in the southwest of the Japanese Archipelago, comprised of 160 islands spread across an area stretching 400 km from north to south, and 1,000 km from east to west. It only makes up 1% of Japan’s total area, just as its residents only account for 1% of Japan’s total population. But Okinawa has something that the rest of Japan doesn’t: it’s entirely located within a subtropical oceanic climate zone, which is characterized by high temperatures, high humidity, and heavy rainfall.

Okinawa actually experiences the smallest seasonal temperature differences of all the Japanese prefectures and has warm, mild weather year-round. Thanks to the ocean breeze, the temperature in summertime rarely goes above 35℃. And in winter, it’s rare for it to drop below 10℃, making Okinawa a great place to visit all year round.

Learn About Okinawa's History to Better Understand and Enjoy Its Culture!

It’s not certain when people first started settling on Okinawa’s islands, but the oldest fossils and human remains unearthed throughout the archipelago are about 32,000 years old. Up until the 10th century, Okinawans led a hunter-gatherer lifestyle, but in the 12th century, they switched to an agricultural society. Then in the 15th century, Okinawa changed from three independent kingdoms into a unified nation, giving birth to the Ryukyu dynasty. The Ryukyu kingdom prospered as a seafaring nation, trading with nearby territories including China, Korea, and mainland Japan.

In 1609, the Satsuma Domain (modern-day Kagoshima Prefecture) invaded and subjugated Okinawa, but its trade with foreign countries continued and Okinawa's unique culture continued to be influenced by other places such as China and mainland Japan.

In 1879, in the aftermath of the Meiji Restoration, the kingdom of Ryukyu was abolished and replaced with Okinawa Prefecture. After WW2, the island came under the control of the American military, which added a further layer of complexity to Okinawa's history. However, this interesting and rich history is just another thing that adds to Okinawa's allure.

Northern Okinawa is made up of Yanbaru, which is centered around the villages of Kunigami, Higashi, and Ogimi; the Motobu Peninsula in the northwest; and the Nago and Onna areas known for their many resort hotels and popular leisure facilities.

About 80% of Yanbaru is covered by an evergreen forest which is home to many rare animals and designated national natural monuments like the Okinawa rail and the Okinawa woodpecker. The best way to experience the area is by hiking, kayaking, canoeing, or some other form of nature tour.

The Motobu Peninsula is home to many popular tourist spots like the Churaumi Aquarium or the Nakijin Castle Ruins, a registered World Heritage Site.

The Nago and Onna areas, on the other hand, are famous for being a treasure trove of scenic spots, including Cape Manzamo, Cape Maeda, and the Okinawa Blue Cave.

The central part of Okinawa's main island is dotted with US military bases and as such, the area is a center for American culture, with places like the popular StateSide Town (once a residential area for American soldiers and their families) which is full of chic cafes and shops. If you’re more into sightseeing, take a relaxing drive down one of Uruma’s marine roads that connect the city to the remote islands of Hamahiga or Ikei and enjoy the spectacular scenery along the way. Central Okinawa is also home to the World Heritage Sites of the Nakagusuku Castle Ruins, the Zakimi Castle Ruins, and the Katsuren Castle Ruins.

Southern Okinawa includes the city of Naha, the seat of Okinawa’s prefectural government, as well as Naha Airport, the gateway to the islands. Popular tourist spots around the Naha and Shuri areas include the remains of Shuri Castle (large parts of which, including the main building, were destroyed in a 2019 fire), which used to serve as the royal palace in the days of the Ryukyu kingdom. There is also Sefa-Utaki, one of the most sacred spots in all of Okinawa, as well as shopping and good dining at International Street (Kokusai-dori).

Southern Okinawa was also where American and Japanese forces clashed during WW2, which is why the area is full of war monuments and features a peace memorial park, as well as the Himeyuri Memorial Tower, all to remind people about the importance of peace.

Okinawa is made up of 160 islands spread out across a vast ocean. Among them, 47 are inhabited, with the remaining 113 being uninhabited (as of January 2018). Points of interest include Ishigaki Island, where you can enjoy exciting glass-bottom boat tours, or Miyakojima Island, known for its coral reefs and for having "the whitest beaches in the East.” There is also Taketomi Island, which preserves Okinawa’s traditional red-tile-roofed houses, as well as Iriomote Island, home to primeval forests and many designated national natural monuments. Okinawa's islands have so much to offer, and it’s easy to see why people from all over the world come to visit them.

As mentioned above, Okinawa boasts only a small temperature difference throughout the year. However, although less noticeable than other parts of Japan, it still experiences four seasons. July - August is when average temperatures in Okinawa are the highest, while January is when they’re the lowest. Okinawa also experiences a lot of rainfall, with May - June being the annual rainy season, and typhoons occurring frequently in August - September. However, once the rainy season concludes in July, or during winter, Okinawa actually sees very little rain.

Okinawan spring is when the weather can change on a dime. Between March and May, you can expect various weather cycles. Sometimes it will be muggy, other times it will be chilly. You can never be certain what the weather will be like when it comes to Okinawan spring. But what’s certain is that the temperatures will continue to climb. Early May is the beginning of the rainy season when the average temperature is around 21℃ and the average rainfall is about 150 mm. (The picture above shows a traditional “Haarii” dragon boat race held every May.)

From early to mid-June, the rainy season is coming to an end and Okinawa enters summer. During this time, average temperatures are often over 30℃, and with a high UV index, wearing sunblock is a must. August - September is Okinawa’s typhoon season. You’ll see most of them hit or approach the islands during the first month of that cycle, which will be accompanied by heavy rains (362.5 mm on average). The average temperature during this period is 28.2℃.

In autumn, the weather in Okinawa alternates between warm and cold as the temperatures steadily fall. Around October, high pressure from the mainland brings with it seasonal winds and Okinawa starts to feel that winter is slowly approaching. The sun isn’t as strong and mornings are brisk, which makes October the perfect time to visit the islands. You can even enjoy marine sports up until the end of the month. The average autumn temperature is 25.6℃ while the average rainfall is 239.3 mm.

Okinawa sees a lot of clouds and rain during winter, which is accompanied by chilly northern winds. However, around mid to late January, in the north of the main island (February in the southern regions), you can enjoy Okinawa’s famous Ryukyu-Hizakura cherry blossoms. Okinawa is the first place in all of Japan where cherry trees start to blossom, and many people visit the islands just to see them. The average winter temperature is 19.3℃ while the average rainfall is 97.1 mm.

Okinawa is easily accessible via plane from any Japanese airport. Haneda Airport in particular offers about 30 flights to Okinawa a day, making it very easy to plan your trip there. Currently, because of the coronavirus pandemic, some of those flights have been canceled, so please make sure to check the available flight information beforehand.

If you want to save a little money on the plane costs, take advantage of the early reservation discount system offered by major airlines or use a low-cost carrier (LCC). An LCC will definitely get you to Okinawa on the cheap, but remember that you can’t change your reservation and that their in-flight services are normally not free. Plus, you may be charged additional baggage fees, so keep this in mind when you’re deciding on how to get to Okinawa.

Tokyo’s Haneda Airport offers around 30 flights to Okinawa’s Naha Airport a day. The flight takes about 2 hours and 40 minutes, and costs anywhere between 9,000 and 50,000 yen, depending on what class you’re flying. Prices may also change depending on the season.

Osaka’s Kansai International Airport offers around six flights to Okinawa’s Naha Airport a day (as of May 2021). The flight takes about 2 hours and 10 minutes, and costs anywhere between 9,000 and 40,000 yen, depending on what class you’re flying. Prices may also change depending on the season.

Fukuoka Airport offers around 20 flights to Okinawa’s Naha Airport a day. The flight takes about 1 hour and 40 minutes, and costs anywhere between 5,000 and 35,000 yen, depending on what class you’re flying. Prices may also change depending on the season.

There's Something for Everyone in Okinawa!

From world-famous crystal-clear waters to evergreen forests teeming with rare and exotic animals, not to mention the islands’ unique culture and history, Okinawa has something for everyone. It’s easy to see why so many people keep visiting the islands.

Experience all the wonders of Okinawa and visit on your next trip to Japan!