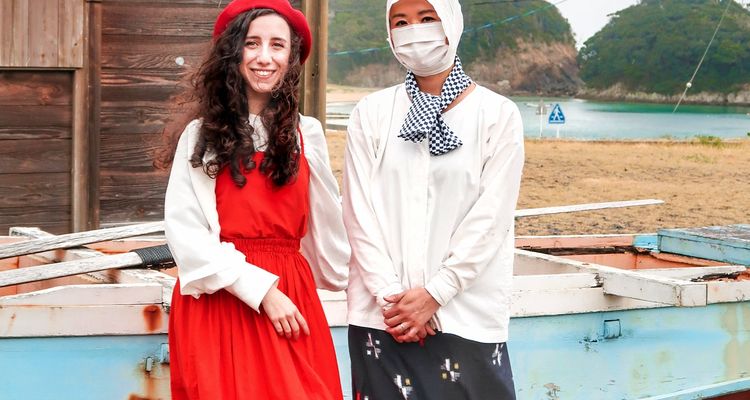 An Encounter With the Ama: Japan’s Legendary Female Divers with Thousand-Year-Old Traditions

In a world where women historically struggled to establish themselves stands the legendary figure of the Japanese “ama.” Cloaked in their sheer white garments, these revered divers faced the depth of the sea since ancient times, inspiring many generations of young women with their strength and thousand-year-old wisdom. We drove to the remote ama hut “Satoumian” to meet Miyuki, an ama diver working in the Shima area of Mie Prefecture, where the ama culture is deeply rooted. Pulled by a powerful passion for the profession, Miyuki guided us through the traditions of the ama and shared the meaning and difficulties of being an ama in modern-day Japan.

Who Are the Ama? History of Japan’s Intrepid “Women of the Sea”

When we first met Miyuki, she was standing inside the ama hut, her hair veiled by the traditional white headscarf and her figure framed by a window overlooking the vast sea. “Ama” literally means “woman of the sea” in Japanese, a word referring to traditional female freedivers who descend to depths of up to 25 meters without the aid of any modern scuba equipment or fishing tools to collect seafood such as shellfish, abalone, and seaweed as well as pearls for a living.

As Miyuki started to lay our lunchーfresh, local seafood caught by the ama themselvesーon a charcoal grill, the hut filled with an inviting aroma and her narrative on her life as an ama and stories about her predecessors reverberated through the calming space. “The ama practices are said to be 2,000 or even 3,000 years old. At the time of pyramids, ama already existed,” she proudly explained to us.

An archaeological site in the town of Uramura in Mie Prefecture revealed a great number of abalone scraper tools and abalone shells ascribable to ama activities that were dated as approximately 3,000 years old, suggesting that ama existed in the area as far back as that time. Ama are also mentioned multiple times in the verses of the “Man’yoshu,” Japan’s oldest collection of poetry compiled sometime after 759, and in the “Makura no Soshi,” one of the most important works of literature of the Heian period (794 - 1185), completed in 1002. Wooden tablets dated to 745 that were excavated from the ruins of Heijo Palace in Nara Prefecture and several other historical documents also attest that ama supplied Japan’s ancient capitals and Ise Jingu with abundant food offerings since ancient times.

According to legend, Yamatohime-no-mikoto, an ancient Japanese royal who enshrined the sun goddess Amaterasu Omikami at Ise Jingu in Mie Prefecture, visited Mie’s Toba area and was fascinated by the taste of abalone offered by an ama called Oben. Since then, abalone has been presented as an offering at Ise Jingu.

So, not only were ama honored with the task of retrieving seafood for the Imperial family and court, but they also had close ties with one of Japan’s most sacred sites by providing the abalone used as food for the deities during ceremonies. Abalone was also an ingredient incorporated in the meals presented to the shrine guests. It even became a souvenir for visitors!

Although pearl diving ama were considered rare before the Meiji period (1868 - 1912), in more recent times, the history of ama became profoundly interwoven with that of Mie Prefecture’s most renowned treasure. In 1893, Mikimoto Kokichi discovered a technique to create cultured pearls and established his luxury pearl company in Mie’s Toba City. He then employed ama and their knowledge to help the business thrive and grow internationally.

Traditionally, ama would wear nothing but a “fundoshi” (loincloth) or a garment wrapped around their hips and a headscarf when diving, but it was around when the pearl industry began to flourish and foreign customers would come to observe them at work, that their full-body traditional white attire called “isogi” was introduced. White was chosen for its auspicious meaning and ability of magnifying a person’s figure when underwater, with the result of warding off sharks and other dangerous marine creatures. With the invention of wet suits in the 1950s, these became largely favored by present-day ama who also added single-lens masks to their diving ensemble in order to make their time underwater more efficient.

What hasn’t probably changed for millennia is the ama’s unique breathing technique. “I can dive for about 30 seconds. But there are ama who can hold their breath for up to 3 minutes,” said Miyuki when inquired about it.

Ama practice a breathing technique in which the divers would hyperventilate, take a final deep breath, and then make the plunge. As a result of hyperventilation, ama release air in a distinctive, long whistle sound called “isobue” (beach whistle) once they resurface from a dive. This unique way of breathing, passed down for generations from elder to younger ama, allows them to avoid damage to their lungs, and in 1996, it was also designated as one of Japan’s memorable 100 Soundscapes by the Japanese Ministry of the Environment.

Ama lived with the sea, coexisting with nature of incommensurable power and peril. They were believed to be able to endure the extremely cold temperatures of sea water longer than men due to women’s higher content of subcutaneous fat. They would usually start their training as early as 12 years old and remain active well into their 70s and 80s, often in enviable physical condition.

Only relying on their skills and knowledge, ama were able to earn a remarkable income diving into the depths of the sea in search for marine delicacies. We tried one, the turban shell, during the course of our lunch with Miyuki as she was telling us how, in the past, having an ama in your household was considered synonymous with wealth and fortune. Being a highly respected and well-paid role, families were proud to keep such traditions alive and would rather prefer their female members to learn the profession than being relegated to the domestic space.

Ama were capable of self-support and had an active, highly relevant position in their local community in times when Japanese women were mostly not allowed to work or decide for themselves. “It’s impressive what ama could do and achieve solely with the power of their own ability and expertise. I admire these independent women very much, so I decided to become an ama myself.”

Although there are still people like Miyuki who, inspired by her precursors’ powerful message, keep the traditions of Japan’s women of the sea alive, the number of ama divers is declining. According to a survey by the Toba Sea-Folk Museum, there were 17,611 ama in Japan in 1956, while in 2010, only 2,174 were left and half of them were diving in Mie Prefecture’s Toba City or Shima City.

Multiple factors endanger the continuation of the ama culture, with aging and the new generations’ disinterest being just a couple of them. The modernization and commercialization of fishery, with the consequent depletion of marine resources and dwindling demand for their activity, also threaten the ama way of life. At the same time, the changing ocean environment and warmer temperatures have taken a toll on the seaweed acting as the main source of sustenance for seashells, so much so that the number of abalones caught by ama divers is also dramatically shrinking.

“Nowadays, it’s very difficult to make a living by only working as an ama, but we stand by the belief that nature must be protected and the sea preserved for future generations. By taking only what we really need, living in harmony with the sea, and working towards nature conservation, we can keep the ama culture alive.”

Miyuki is adamant that the ama’s sustainable model of fishing is the solution. For centuries, ama made sure not to collect too many marine resources at one time, restricting the size of seashells caught as well as the equipment they utilize, as overfishing would damage the very same ecosystem that supported their livelihoods. Today, policies for sea protection are being implemented which regulate the fishing season and shell size by law, as well as limit the frequency and duration of fishing per day in areas where ama fishing is practiced.

The tradition of such female freedivers did not exist anywhere outside of Japan and Korea. But in recent years, this culture that has been passed down for thousands of years without changing its core methods has started gaining international attention. In 2017, it was finally designated as an Important Intangible Folk Cultural Property of Japan and since 2007, efforts to register Japanese ama and Korean haenyeo as UNESCO’s Intangible Cultural Heritage are ongoing in hopes of preserving this valuable tradition and making it universally recognized.

Over the last few years, the presence of ama has also helped revitalize local communities and attract overseas visitors to off-the-beaten-path areas of Japan. Ama became a symbol of Shima sightseeing and illustrations can be found on many tourist posters and pamphlets in the area which, according to the Shima City Tourism Association, noted a record number of 9,000 visitors in 2018.

Surrounded by rich nature, with the sea stretching right before your eyes, Amagoya (Ama Hut) Satoumian is a facility sustaining the promotion of ama diving by allowing visitors to immerse themselves in the ama’s unique fishing communities and culture and enjoy Shima’s scrumptious seafood and hospitality. “Amagoya,” or ama huts, are places of gathering and rest for ama to prepare, eat, warm themselves around the fire, and socialize before and after their diving sessions. They’re the embodiment of the ama’s way of life, simple yet welcoming, and they exude the energy and warm personality of the locals.

The abundant, freshly-caught seafood banquet on offer is only the tip of this hut’s appeal, as the atmosphere and genuine interactions make up the bigger portion of its charm. Feeling as though we were part of the local community, we sat around the fireplace with Miyuki, chatting and listening to her invaluable experiences of life and sea.

Ama divers have practiced their ancient sea foraging and free-diving traditions for around 3,000 years, living perilous and remarkable lives in search for treasures of the sea. Their wisdom and tenacity are a source of profound inspiration that should be preserved and taken note of. So, why not indulge in delicious seafood while listening to their invaluable stories of life? These vigorous women have hearts of gold and, with their warm nature, will be sure to make you feel at home!