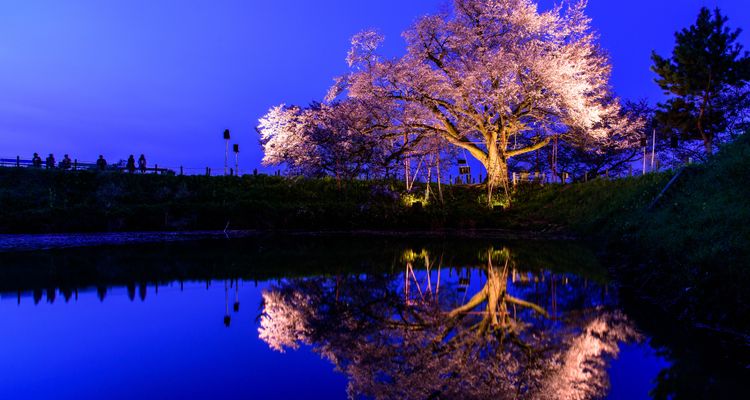 11 Cherry Blossom Spots Around Fukuoka: A Must-See for Spring Visits!

Every year in March and April, Japan's parks are painted in a beautiful pink from blooming cherry blossom trees. There are thousands of beautiful hanami spots throughout Japan, but you can only enjoy the sight of the cherry blossoms for a short time each year, so where should you go? Here are the twelve best spots for cherry blossoms around Fukuoka, an area in southern Japan that's famous for its delicious local cuisine and beautiful landscapes. Fukuoka Castle in Maizuru Park is a symbol of the city, and it's also famous as one of Fukuoka's leading places for hanami (cherry blossom viewing), but it's often lively with visitors even outside hanami season. Here you'll be able to see about 1,000 cherry blossom trees, called sakura in Japan, including varieties such as Yoshino cherry and weeping cherry. Also, Ohori Park is next to sMaizuru Park, and there you can enjoy hanami while riding on a boat in the lake. During hanami season, lots of stalls are set up serving delicious festival food. Make sure you stop by for a snack while you enjoy the atmosphere! During the Fukuoka Castle Sakura Matsuri festival, the trees are lit up and you can enjoy a beautiful interwoven scenery of the castle walls, turrets, and sakura. Nishi Park is a popular hanami spot near Tenjin in the center of Fukuoka. There are about 1,300 trees here, with varieties including Yoshino cherry, Oshima cherry, mountain cherry, and weeping cherry. The park becomes full of people during hanami season and food stalls are also set up. It's nice to leisurely walk around the wide grounds. During the season, the trees are lit up between 6:00 am and 8:00 pm, creating a magical scene. For more ways to spend your evening in Fukuoka, no matter the time of the year, browse our favorite 12 Night Scenes in Kyushu! Katsuyama Park, the home of the popular Kitakyushu sightseeing spot Kokura Castle, is also a popular hanami spot. The sight of Kokura Castle and the sakura that can only be seen during this period creates a fleeting spectacle. There are about 300 trees and they're lit up at night during peak season. 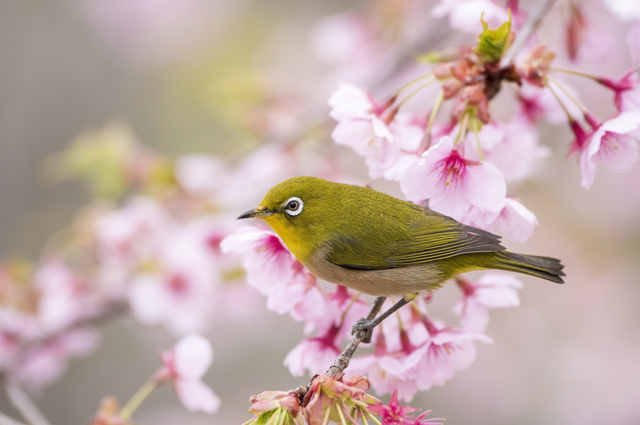 Even though it's the middle of a city, you can see the beautiful Japanese white-eye, a bird that is said to be the herald of spring in Japan.

The inside of the castle is lit-up during the period too, turning the grounds into a mystical world that you can't experience anywhere else. Try enjoying the night sakura lit up by gentle lanterns. Asakura is a city almost smack-dab in the middle of Fukuoka, and it takes about an hour from the center of the city of Fukuoka to get there by train. Akizuki is an area called "Kyushu's little Kyoto," and is famous for its pretty traditional look. During hanami season, the 500 metre long Baba-dori Street is framed on both sides by around 200 blooming trees, creating a tunnel of blossoms that connect overhead.

Since the traditional castle town atmosphere remains in this area, it's particularly lovely to take a leisurely walk down Baba-dori during the spring season.

There are many shops in the area that have a traditional Japanese atmosphere. During the cherry blossom season, the sakura are lit by naked light bulbs to create an even more enchanting sight.

About Akizuki Sugi no Baba

Access: 19 minutes by bus after alighting at Amagi Station, right by the Kyodokan Fukutsu is in the northern part of Fukuoka and takes about 25 minutes by express train from JR Hakata Station. Miyajidake Jinja is a shrine that's famous as one of Fukuoka's leading hanami spots. About 2,000 trees bloom around the grounds in the spring. They have many varieties including Yoshino cherry and Taiwan cherry, meaning that the season here lasts a little longer. Miyajidake Jinja is a popular spot because the enshrined deity offers blessings for good business, but it's especially lively during hanami season, when around 100,000 people visit for their annual Sakura Matsuri festival. On the right side of the main shrine is a tree called the "lucky sakura," which blooms the earliest of all the trees at Miyajidake Jinja, from mid-January to early March.

For more beautiful shrines to see in Fukuoka, check out our picks of 10 Recommended Shrines to Visit in Fukuoka! Kurume is in the center of Fukuoka Prefecture, around 30 minutes away by train from the city of Fukuoka. The 100 year old sakura tree in Asai is a particularly recommended sight. It's a magnificent mountain cherry tree that's 18 metres tall with a 4.3 metre diameter trunk. The beauty of the tree will make you fall in love at first sight. The Asai Ipponzakura looks different if you look at it in the morning, afternoon, and evening. The sight of the sakura reflected in the lake is magical. Standing as just a single tree, its beauty stands out even more against the blue sky.

This tree takes on a magical atmosphere when lit up in the evenings between 7:00 pm and 9:00 pm. You'll understand why so many people make the trip to see this single tree each year.

Access: 5 minutes by taxi or a 30 minute walk from Zendoji Station Kurume Hyakunen Park is a lively mark also located in Kurume. There is a row of around 200 cherry blossoms along the banks of Kyushu's only large river, the Chikugo River. You can enjoy hanami while gazing out at the flowing river surface. If you go in the early morning, you can enjoy the sight of the trees by yourself. Of course, when the sakura are in full bloom is the most popular time to visit, but the trees have their own beauty when they first begin to bloom or after the petals start to fall, too. If you look up from below the trees, you can see the pink flowers against the blue sky. Also, there are also sakura at the Nakahiide Park on the east side of the nearby shopping center Yume Town, so why not head in that direction while walking along the river? 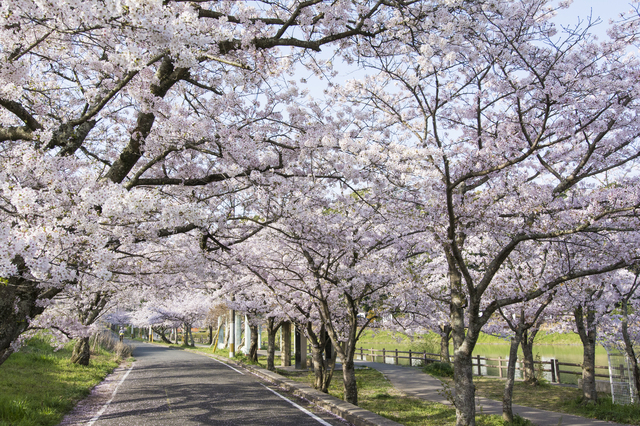 Nakama is in the northern part of the prefecture, just an hour away from the city of Fukuoka. The biggest park in the city is Habu Park, and the 1,000 Yoshino cherry trees blooming here draws many visitors.

Inside the park is a large lake, and a red bridge over it that connects to the grounds of Habu Shrine. You can also ride a boat (300 yen for 30 minutes) and enjoy the sight of the sakura from the water.

During the Echizen Nakama Sakura Matsuri, you can enjoy the sight of the sakura lit up between 6:00 pm to 9:00 pm. The clusters of burial mounds from the Kofun period within the grounds are also interesting to see here. Itoshima, which faces the Genkai Sea on the western side of Fukuoka, is about 40 minutes away by train from the city of Fukuoka. Kafuri Park is a park constructed on cliff facing the sea. It's known for its sakura, and has about 300 trees on the grounds. Since it's on a slightly elevated cliff, please go in shoes that are easy to walk up and down the slopes in. The trees stretch up to the observation deck so you can take a nice walk while admiring the flowers. It's a popular park since it has a great view of the ocean, and the only place you can see both Kafuri Bay and Itoshima Fuji is from here. On clear days you can even see the Genkai Sea and Orono Island. It's a popular spot that's surprisingly close to central Fukuoka. This park in Kurume is a popular hanami spot just 30 minutes away from the center of Fukuoka. This park is famous for being a favorite of Natsume Soseki, one of Japan's most famous authors. It was also a hanami spot for the Kurume daimyo (feudal lord), and has about 170 trees. There are various types of trees here, including Yoshino cherry, double-flowered cherry, and mountain cherry. There are plazas throughout the park with nice views, so explore and see which you lke best! Beyond the fully blooming sakura lies Kusano, an area full of historial buildings. You might be able to understand why this area was beloved by historical daimyo and authors alike as you gaze at this beautiful scene. This is another popular spot in Kurume for hanami. Kurume Castle is actually the ruins of the castle built by the daimyo Arima clan in 1620 that was in use for about 250 years. The sight of the ruins among the sakura is a charming Japanese scene. Since it's not permitted to have parties or gatherings on the grounds, this place is recommended for people that simply want to enjoy the flowers. This area was once the site of a famous castle called Sasahara Castle, but now only the stone walls and the facade facing the moat remain. The sight of the sakura blooming without change in the face of lost history is quite moving. The street leading to the Kurume Castle Ruins is also lined with sakura, so you can enjoy the beautiful sight of petals falling from your car window.

Access: A 3 minute walk from Daigaku Byoin bus stop, which is 7 minutes from Kurume Station

There are many hanami spots around Fukuoka, so you can enjoy the sakura from the very start of the blooms. If you buy food from stalls or bring in a bento from your favorite restaurant, it will definitely be even more delicious because of the beauty of the flowers! We've only just scratched the surface of what to do in Fukuoka. If you want to know more, we've put together a comprehensive guide for 50 Things to Do in Fukuoka we're confident will help you plan your trip!

If you're visiting Japan in cherry blossom season, we're here to help! Our 2020 Cherry Blossom Forecast covers all you need to know about the best places in Japan to see cherry blossoms, plus exactly when they're forecasted to be at their peak in 2020. Cherry blossom season is short, so visit our guide to really enjoy this beautiful time of year!