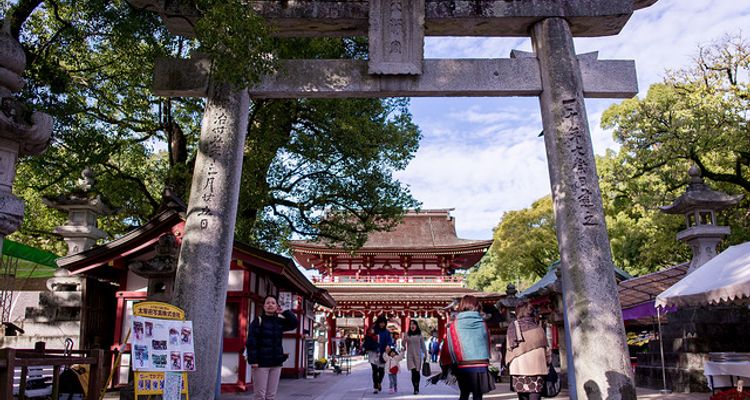 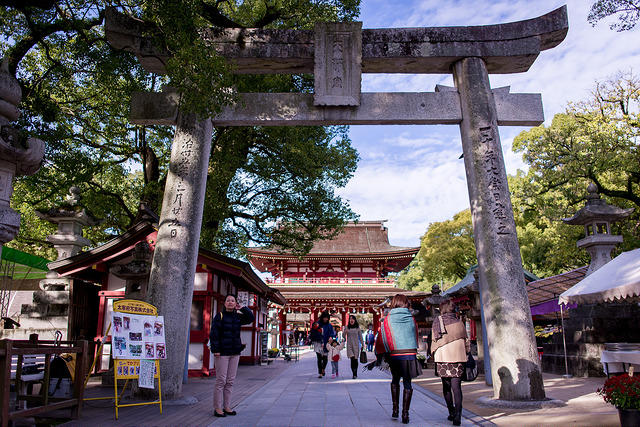 10 Recommended Shrines To Visit in Fukuoka

Do you like shrines? Then Fukuoka is your place to be. Located in the north of Kyushu, the prefecture has the third biggest number of shrines in Japan. There over 3,000 shrines in Fukuoka and that's more than Tokyo or Kyoto has got. Here are the list of 10 selected shrines that covers major ones to lesser known ones. Dazaifu Tenmangu is the head shrine of more 3,000 "Tenmangu" shrines that spread across Japan, and is one of the most famous shrines in Fukuoka. It is particularly popular among students as it enshrines a deity of study, Michizane Sugawara. Apart from study, it is also believed to help people with finding love.

A must visit spot in the shrine is Tenkai Inari Shrine in the back of the precincts. This place is said to have the strongest power in Dazaifu Tenmangu to make wishes come true. It is a relatively less known spot so you can visit the shrine in a relaxed mood. A lot of plum trees are planted all over Dazaifu Tenmangu, as Lord Michizane liked the tree. In the blooming season of plum trees, early February to early March, a nice smell of plum trees sweeps through the whole precincts. There is a small plum garden on the way to Tenkai Inari as well.

Opening Hours: Depends on the month. Please check the HP.

Kushida Shrine is called "Okushi-san" and loved by the locals. In late January for two weeks, the entrance of the shrine is decorated with the biggest Otafuku in Japan. Otafuku is a Japanese traditional mask of a homely woman's face that is believed to bring good fortune. Passing through the mask to visit the shrine may bring good fortune to you too.

In this shrine, you can see the festival float that is used in a festival in Fukuoka called Hakata Dontaku. Despite its huge size,  the decoration that's done to it is very delicate and impressive. When you are in Kushida Shrine, don't forget to look up. Underneath the front gate, you will find a huge disk called Ehoban with 12 signs of Chinese zodiac drawn to it. The arrow points to the zodiac of the year, so check it out. Kashii Gu is a shrine built more than 1800 years ago to enshrine the Japanese Emperor and the Empress. It is built with a unique style called "Kashii Style" with the both ends of its roof sticking out like wings. It gives you a strange feeling that you are wrapped around by the building.

Komainu (guardian lion-dog at shrine) is also pretty unique in this shrine. On the thick legs and the solid body, an unexpectedly small head is placed. With an intimidating look on his face, it guards around the area and keep evil spirits away from the sacred ground. In the precincts, there is Keiseki Shrine. There you don't see Komainu but Komadori (guardian chicken). You don't want to miss those as they are one of the only two pairs of guardian chickens in Japan. It is a small shrine, but offers a lot for you to see.

Opening Hours: Depends on the month. Please check the HP. Miyajidake Jinja is a historic shrine built over 1600 years ago. The first thing you will see when you enter the precincts is the gigantic Shimenawa (rope used for ritual purification). With its 11m lengths and 3t weight, it is one of the biggest Shimenawa in Japan. Surprisingly this giant rope will be replaced with a new one every year. In this shrine that stands on a hill, in every October and February, the sun sets facing straight to its main road to the shrine for a week. To see this photogenic view, the path of light, a lot of people visit the shrine every year. Other than the main shrine, there are 8 other rear shrines in Miyajidake Shrine. Those include unusual shrines such as Inari Shrine with a different archway and a shrine that enshrines a Buddhist god. It is believed that if you visit all the shrines, your wish will come true, so it will be a bit like going hiking.

Opening Hours: From sunrise to sunset. Munakata Taisha enshrines the three children of Amaterasu-omikami, the supreme deity of Japan. The name Munakata Taisha refers to all three shrines in the precincts: Okitsu-gu, Nakatsu-gu, and Hetsu-gu. To go to Okitsu-gu and Nakatsu-gu, you need to take a ferry to reach the island that both shrines are located. But Hetsu-gu, the shrine this article mainly focuses on, can be accessed by trains and buses. The precincts are pretty spacious and designed with simplicity. You can have a nice and quiet walk as there are ponds and a little forest. In the left back corner of the main shrine lies Shinpo-kan (shrine's treasury). It contains roughly 80,000 national treasures, and certainly worth visiting to see. The three enshrined deities are believed to have divine favor in marine and land safety. A lot of people buy the road safety stickers and luck charms in order to avoid traffic accidents. Apart from auto mobiles, they also have the lucky charms for cyclists. Why not buy one for yourself? Koura Taisha is a shrine that was built over 1600 years ago. It enshrines the deity of the fortunes of war that is believed to have a wide range of divine favor such as protecting against misfortunes, longevity, and road safety. The shrine is surrounded by the nature and a clean atmosphere, as it is located in the middle of a mountain. The historic looking main shrine was completed in 17th century. With its 17m width, 13m height, and 32m length, the shrine is one of the biggest shrines in Kyushu area. Colorful animals and flowers are drawn on the ceiling. Each was drawn by a different person, so each has its own taste to it and they won't bore you if you look at them for a long time. Koura Taisha is a great shrine to visit at night as well. Paper lanterns you will see through the archways give away a magical atmosphere. The shrine office has an observatory and the night view of the city of Kurume from there is totally worth seeing.

Access: 15 min on Nishitetsu Kurume Station Bus, get off at Araimachi Station, 30 min walk from the stop.

Hakozaki-Gu is one of the three most important shrines out of 24,000 Hachiman Shrines that can be seen throughout Japan. Hakozaki-Gu is believed to have a divine favor in competitions and a lot of people who need a favor in study, business, sports, etc. come to the shrine. Hakozaki-Gu has a rather unusual archway. Ordinary archways don't have joints in the posts, but you can see that the posts of the archway at Hakozaki-Gu has three parts each. Those posts are thicker than normal ones and look stronger as well.

When you are at a shrine, you tend to look at the main shrine, but when you are at Hakozaki-Gu look back in the main road. You will be seeing a beautiful ocean behind those archways. When the weather is clear, it is a must visit site.

Koinoki Shrine is a lovely looking shrine (literally) located in the precincts of Mita Tenmangu. It enshrines a deity called Koinomikoto and believed to have a divine favor in finding love and marriage. The shrine got popular when a lot of people allegedly got a boy/girlfriend after visiting this shrine. It particularly attracts a lot of young females who are in search of love. The whole place is filled with heart shaped things. From the archway and the ground to the main shrine, you will see them literally everywhere. The main road that heart shaped stones are embedded is called Koisando (love road). It is said that if you think of your crush while walking this road, your crush will recognize your feeling. Hikosan Jingu is a shrine located in a mountain called Mt. Hiko that has been worshiped by the locals from the ancient times. Part of the mountain trails are the main approach to the shrine and at the top of it there is a (jogu) high shrine that enshrines a deity. The mountain shows a lot of different faces according to the season, so just looking at it from the bottom is, itself, pretty fun. In the middle of the mountain, there is the main shrine which is registered as a national important cultural property. The act of visiting a shrine can be finished here, but if you want to go extra and think you are fit enough, a 2.2km-long extra trip to the top would be fun. There is some part where you need to hold onto chains to climb, so be sure to know that it is going to be a total work out and prepare yourself for it if you are going all the way. To go to the main shrine, you need to take a long long stairs, if you want to save some time, there is a cable car that goes up and down from the bottom to the top. There are two stops in between, so it would be a good idea to walk up to one of the stops and then let the cable car do the rest.

Price/fee: For the information on cable car's fare, please refer to the homepage. Sakusai Shrine is a shrine right next to the sea. Its history is relatively young compared to other shrines as it was built in 17th century, but the gate and shrines look very seasoned and authentic. The reason for it is that its gate and shrines have never been reconstructed since its establishment. Shrines usually undergo a series of reconstructions. From its delicate work, we can see how technically well those old carpenters were.

As the shrine shares the name with one member of a Japanese popular boy band called Arashi, a lot of the fans come here to pray that they win their tickets for their live concert. There is a picture of sakura drawn on the characteristic pentagon-shaped Ema (small wooden plaques on which Shinto worshippers write their prayers or wishes), which is pretty lovely even if you are not a fan of Arashi. Right next to Sakurai Shrine, there is Chikuzen-Futamigaura. There are two rocks standing in a line looking over the archway, and if you pray to those rocks, it is saided that it will help you with better marriage. You are recommended to visit this place with your significant other.

Access: 30 min on JR Imajuku Station Bus, get off at Sakurai Station, 15 min walk from the stop

Fukuoka has a surprisingly high number of shrines. The article was about 10 particularly unique shrines in Fukuoka. Each shrine is worth going out of your way to visit. Next time you come to Japan, be sure to check out these places.