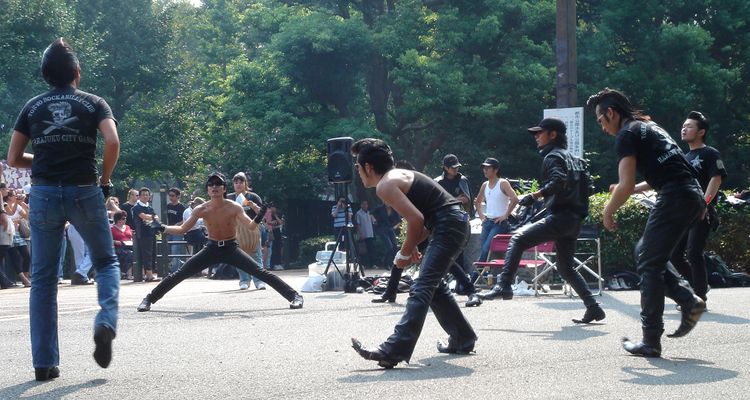 Japan is a nation full of various subcultures - a place where, no matter your taste, you can find a collective of kindred spirits. It's a fact that couldn't be truer when it comes to fashion. Tokyo is without question one of the key fashion capitals of the world along with New York, Paris, and Milan, and has a large population of creative thinkers and progressive fashion lovers willing to take risks and redefine movements entirely. To understand it a little better, we've put together a guide to some of Tokyo's most iconic modern fashion movements.

Lolita is one of the most iconic of all the Japanese fashion subcultures. The style is heavily influenced by an ultra-feminine take on the traditional Victorian and Edwardian style of children's clothing. The style came into being in the early 2000s as an offshoot from the gothic and aristocratic styles of the Visual Kei movement. While the most mainstream of all the Lolita subcultures is the more girly 'cute' style, dominated by pastel colors and pinky hues, there are several other Lolita style subcultures. One of the most popular places to find Lolita clothing these days is at the Shibuya 109 shopping center in Tokyo.

Lolita style is so wholly encompassing that within the movement are families of other sub-movements. Some of the main subcultures within the Lolita movement include 'gothic,' 'punk,' 'sailor,' and 'country' infused Lolita styles. The most notable of all the Lolita subcultures has to be Goth-loli, aka Dark Lolita or Gothic Lolita. Like classic Lolita fashion, its foundation lies within the Victorian era fashion style, but with gothic overtones. Think black on black, heavy eye makeup, bows, and Beetlejuice block stripes.

Without question, one of the most influential fashion movements of contemporary Japanese culture is Visual Kei. The name Visual Kei is so wholly encompassing that within it exists several smaller subsets of fashion movements, which would require another article entirely to cover in great depth. As an overview, however, the moment came into popularity during the 1980s with the rise of bands like X Japan who blended heavy metal, glam rock, and punk ideologies in Japan.

The style is defined by its elaborate makeup and hair styling, as well as its gender-bending, almost gothic undertones. You could say that it was a Japanese answer to Western glam rock bands which were also popular at the time of Visual Kei's debut. By the mid-1990s, the popularity of the movement started to decline, however during the 2000s, a modern incarnation of the movement known as Neo-Visual Kei brought the style back onto the scene.

The Rockabilly style is by no means a Japanese invention, but Japanese fashionistas have adopted it uniquely. Head to Yoyogi Park in Harajuku on most weekends throughout the year, and you'll find a collective of Rockabilly style dancers performing to a large gaggle of fans and passers-by. These guys prove that for many folks, fashion isn't just a way to wear clothes, but a way of life. Around 30 years ago was when the Rockabilly scene hit the trendy suburb of Harajuku. Its international allure and slick bad-boy style captured the attention of inner-city hip kids and lovers of denim alike.

While like many fashion styles, its popularity has waned over recent decades, you'll still find a dedicated few keeping the tradition alive here in Harajuku. Whether it's dancing at Yoyogi or running vintage stores down the backstreets of nearby Ura-Harajuku, also known as Urahara, you'll certainly spot at least one person sporting this style on the streets of Tokyo.

One of the more controversial and attention-commanding modern styles in Japan has to be the Gyaru movement. The title 'Gyaru' comes from the Japanese pronunciation of 'gal.' It's a play on what many assume to be popular American teenage culture, featuring over-the-top makeup, fake eyelashes, typically blond hair, a dark tan, and extra-glamorous accessories (like glitter nail extensions). The movement was most popular during the late 1990s and early 2000s when big hair, slogan T-shirts, multi-colored plastic jewelry, and Euro-pop music was big.

The central hub of Gyaru culture was Shibuya, and similar to Lolita styles, it was especially easy to spot around the Shibuya 109 shopping center, a towering department store dedicated to Japanese subculture fashion. These days, it's hard to find Gyaru devotees, but if you hang around the area long enough, you might spot one, as when these girls are out, they're hard to miss!

Within the Gyaru movement formed a more over-the-top incarnation of Gyaru style known as Ganguro Gal. It's similar to the Gyaru movement, but the defining features (tanned skin, heavy makeup, and big hair) are pushed to the extremes. Other offshoots of the moment are called banba, manba, and yamanba style; these styles combine typical Gyaru fashion with cartoonish inspiration like candy-colored hair and wigs.

Gyaruo is like the male equivalent of the Gyaru style. Like the Gyaru style, the main markers of the subculture are big, blonde hair, over-the-top accessories, and deep brown tans. The Gyaru style is also deeply associated with party culture in Japan. If you head down the streets of Kabuki-cho, the nightlife district of Shinjuku, you'll often find many Gyaruo advertising host club services. They are ready to drink and charm female clientele until their money runs out or the sun comes up, whichever happens first.

Unlike some of the others on this list, Mori Girl is a little more difficult to define. It's one of the more modern subcultures, having risen to popularity during the mid-late 2000s. 'Mori' in Japanese means' forest.' It's a generally more layered style, meant to invoke the feeling of someone who lives a more natural, almost forest-like vibe. Colors are often more natural and muted, and cozy, vintage clothing is a typical staple of the Mori Girl layered look. It's a folky, earthy aesthetic. Although the name has 'girl' in the title, it's a style often adopted by male fashion-lovers as well, as the aesthetics can often be very gender-neutral. It's almost a more thrift-store, vintage look, one that you still may be able to spot on the vintage store populated streets of Koenji, Shimokitazawa, or Kichijoji. Born from the streets of Harajuku, the home of some of the city's most exciting hair salons, came the movement known as 'Salon Boys.' This style mixes higher-end designer brands and well-tailored clothing with vintage style pieces. The folks that spearheaded this movement are hair stylists and their apprentices who put as much care into their daily clothing as they do into their work on clients' hair. Salon Boys are also masters at accessorizing; think dapper belts, porkpie hats, and tidy, retro-inspired glasses. The movement also spawned the fashion magazine CHOKi CHOKi (Snip Snip), which launched in 2002. CHOKi CHOKi (Snip Snip) regularly features professional hair stylists as models.

Taking inspiration from the streetwear savvy dressers of the US, Street Kei is the Japanese incarnation of classic street fashion typically most popular with guys. Think skate, basketball, and hip-hop culture blended with the Japanese eye for detail. Designer sneakers are a key element to the Street Kei movement. You could say that this subculture has a lot of crossover with the hypebeast styles of the US. You'll see Street Kei boys lining up outside Supreme and Comme des Garcons outlets ready to cop the hottest new releases.

Kireime Kei is a style that may at first go under the radar in terms of commanding attention, but that's the whole point of the movement. It's a more conservative type of dress that focuses on timeless style over fashions and trends. Kireime Kei is about keeping everything neat, classic, well cut, and potentially even traditional. It's almost like the Japanese equivalent of the preppy style look, without the real connotations of wealth or brand association. Nice fitting jeans, crisp shirts, understated but well crafted (often artisanally made) shoes, and timeless corduroy jackets are the backbones of the Kireime Kei style. While it may seem basic, it's a style that's kept many of Japan's male fashion magazines like Popeye in business.

Japanese Fashion: Where Outside Influence Meets a Unique Point of View

What makes Japan such a fascinating hotbed of style is the nation's uncanny ability to draw influence from a wide range of sources, yet still ultimately make whatever they're wearing look unique. The landscape has shifted and changed so much in recent times; mostly gone are the over-the-top fashionistas of Harajuku.

Today, in terms of mainstream appeal, most go for clean-cut, basic, multipurpose looks epitomized by mega fashion brands like Uniqlo and Muji. But still, if you look hard enough, you'll find a select few passionate fashion-obsessives doing all they can to keep their subcultures alive.