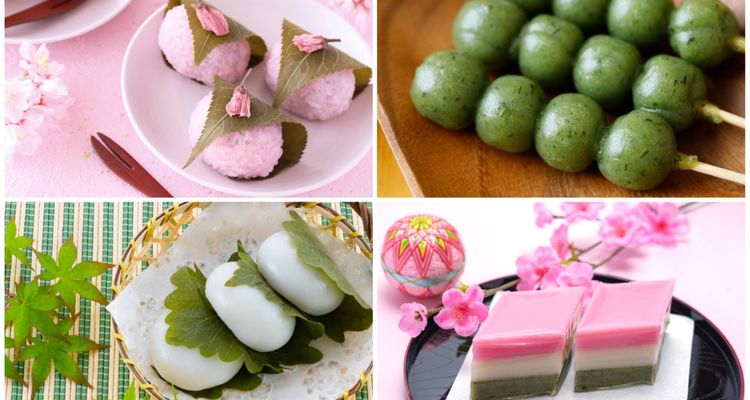 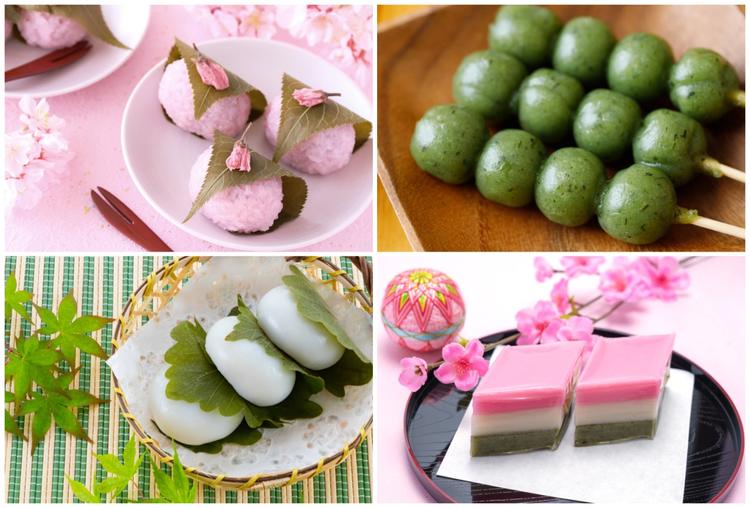 Here are seven traditional Japanese sweets, or wagashi, that correspond to seasons and special occasions. Now they are sold all the time and usually throughout Japan, so be sure to try them! Hishimochi is diamond shaped mochi, which are usually red (pink), white and green in color. It is dedicated with the Hina ningyo (dolls of the emperor and empress) for the Hinamatsuri (Girls' Day, March 3rd ). It is used as more of an offering and therefore although many people know what it looks like, often they have never tasted it before. It actually tastes just like normal mochi and needs to be cooked before you can eat it.  However, sweets which are made to look like Hishimochi are often sold, so you can try those instead. Botamochi/ohagi is cooked sticky rice covered in red bean paste or sesame seeds or kinako (soybean flour). There are several theories on what the differences are between botamochi and ohagi but often they are used interchangeably. The most commonly accepted theory is that they are the same thing but in spring, it is referred to as botamochi and in fall it is ohagi. Yomogimochi is a sweet with mugwort young shoots mixed into mochi, making it green. It is typically a spring time sweet. However, young shoots are boiled and dried, so that yomogimochi can be made throughout the year. Kashiwa mochi is mochi made of Uruchi rice flour with red bean paste wrapped in an oak leaf. Like sakura mochi, some people eat the oak leaf and some do not. It is often associated with Children's Day, May 5th. Kashiwa mochi originated in Edo (current Tokyo) in 1745-1786 CE. The reason Kashiwa mochi is offered on Children's Day is because oak leaves do not fall off until new leaves emerge in the spring and therefore is believed to be auspicious. Kuzu mochi (葛餅) is mochi made of Kuzu flour. It is important to note that it is different from Kuzu mochi (久寿餅) eaten in Tokyo area which is made of fermented flour. It looks transparent and is eaten with kinako (soybean flour) and brown sugar syrup. Since Kuzu mochi from Tokyo area also is  eaten with kinako and brown sugar syrup and looks similar, if you are not sure, just ask whether it is made of "Kuzuko", kuzu flour, or not.