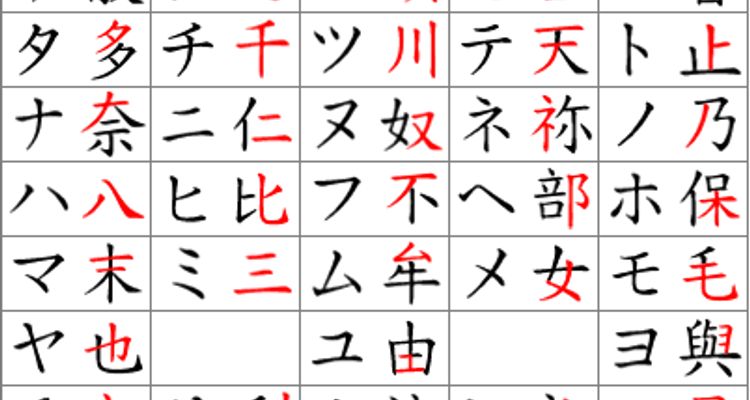 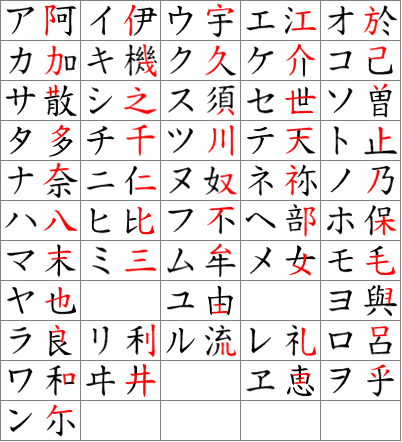 7 Facts You Probably Didn't Know About Katakana, a Japanese Alphabet

Did you know that Japanese as a language has three written systems: Hiragana, Katakana and Kanji? Here are 7 facts to enlighten you on Katakana, one of the three Japanese alphabets!

1. Katakana is one of three parts of the Japanese alphabet.

The Japanese language consists of three written alphabets: Hiragana, Kanji and Katakana. There are other Katakana special characters, but it has 47 basic characters. Katakana is used to read to Kanji and express foreign words and sounds (onomatopoeia). For example, the word "table" in English would be expressed in Katakana as テーブル (teeburu). For onomatopoeia, the sound of popping would be パチパチ (pachi pachi).

These V sounds, Va (ヴァ), Vi (ヴィ), Ve (ヴェ), Ve (ヴォ) only exist in Katakana in the Japanese language. For example, Vaio in Japanese Katakana would be written as ヴァイオ.

Katakana was seen in literature in the 7th century. Parts of Kanji were shortened to Katakana to make it faster to read. By the way, Hiragana originated from Kanji too.

5. Katakana started off as a way to read Old Chinese, Kanbun (漢文). Around the 9th century, scholars of Japanese Buddhism used Katakana to read Old Chinese, Kanbun. This is said to be the official  origin of Kanji. Kantana used to read Kanbun is called Kunten (訓点). Kunten is small Katakana and is written beside Kanji.

6. During the early Meiji era, Katakana was used in formal documents.

Compared to Hiragana, Katakana was thought to be more official and academic. Therefore, it was used in formal documents. Katakana was also taught in schools. This tradition was changed in Meiji 33 (1900), and Katakana was taught as one of the Japanese alphabets.

7. Back then, telegrams were written in Katakana.

If you're a fan of Japanese movies, you might have seen scenes where the characters receive telegrams. These telegrams were mainly written in Katakana. Telephones weren't placed at each home, so telegrams were a popular way to reach out to someone faster than letters.