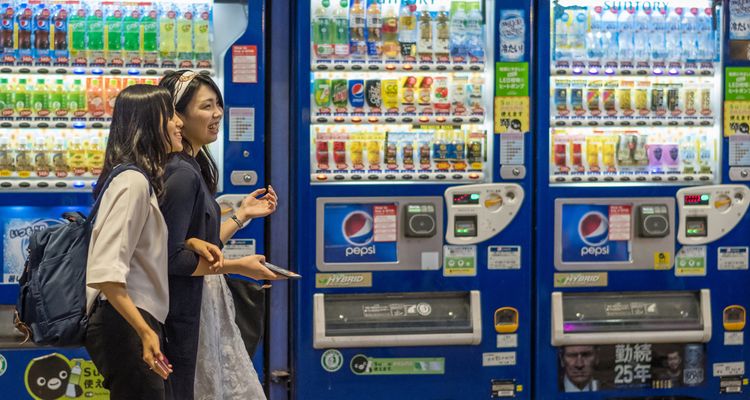 Why Are There So Many Vending Machines in Japan? 5 Secrets That Only the Japanese Know

1. Is Japan's Low Crime Rate Related to the Diffusion of Vending Machines?

Vending machines automatically process purchase and payment, which obviously implies that they hold the money that has been paid by the consumers. If vending machines carrying large amounts of money are installed throughout the city, it’s not hard to imagine them being susceptible to crime. In fact, cases of crime around the world involving vending machines are never-ending, and it's common to see prevention measures like steel cages around machines. In other words, a safe environment with a low crime rate is absolutely essential for vending machines to be installed and operated effectively. Japan is known as one of the world's safest countries, where it's relatively safe for women to walk by themselves in the evening and where people on the train can have a nap with their smartphones on their laps. This suggests that Japan fulfills the criteria for the widespread use of vending machines, which can explain their abundance in the country. Of course, there are instances where vending machines have been damaged in Japan, but the number of cases is only a fraction compared to the rest of the world.

2. Do Busy Japanese Workers Save Time by Purchasing Drinks at Vending Machines?!

How about comparing office workers' working hours internationally? According to the data on working hours across the world by "GLOBAL NOTE", a website that publishes various statistics from around the world, Japan is ranked 22nd. Looking at this figure alone, there are other countries in the world where people work longer hours than Japan. However, in Japan, labor productivity is one of the lowest among developed countries. The country has a unique work culture that attempts to compensate for this low productivity, which results in overtime hours that are not calculated in these statistics. For example, some companies have a "minashi zangyo (expected overtime)" system where the monthly salary includes expected overtime hours meaning that overtime pay will not be given unless hours exceed a stated amount. Other office workers find that although they have worked substantial overtime, the company will only pay for a certain amount, and others may find that they must work outside of their usual working hours without being compensated for those extra hours. This implies that actual working hours in Japan are likely to be much longer than what the ranking show, and it can be said that Japanese office working hours could be one of the longest in the world. Therefore Japanese office workers who have a lot of work to do and do not want to waste time would rather use a vending machine that will shorten the amount of time required to make a purchase, than go to a cafe or queue at a shop or convenience store to satisfy their thirst. This is one of the reasons why Japanese people find vending machines so useful.

3. Can Anyone Set up a Vending Machine!? Some Even Consider It a Side Business!

4. The Behind-the-Scenes of Managing Vending Machines

One of the essential factors that have enabled the spread of vending machines is their management and operation systems. As more vending machines are installed, more empty cans can litter the city, which can in turn depreciate the city's aesthetic value. How then does Japan manage this situation and keep its cities clean? This is all thanks to the thorough management system implemented by the companies responsible for installing the vending machines. These companies manage their machines so that they operate in a stable and hygienic way, such as by placing a bin next to the machine, periodically emptying the bin, refilling products in the machine, and inspecting and repairing the machine to ensure there are no defects in the system. It is no exaggeration to say that vending machines have become widespread in Japan thanks to the invisible efforts of the companies managing these machines.

5. Once Upon a Time, Almost All Vending Machine Drinks Were 100 Yen

The cheap prices in vending machines are also one of the factors that have contributed to its prevalence. In particular, before the consumption tax was introduced in 1989, there was a time when one can of juice could be purchased for 100 yen. The price of 100 yen, a nice round number, and the ease of purchasing a drink with just a single coin led to vending machines gaining in popularity.

*Even in 2020, there are vending machines that sell drinks for less than 100 yen, as you can see in the photo above, although the exact number is unknown and likely not that many

Meanwhile, the number of people using vending machines has been on a downward trend since 2000. One reason is because of the rise in prices due to the repeated increase in consumption tax. This has made it more difficult for people to purchase drinks, as they can no longer pay with just a single coin. At the moment, with the consumption tax in Japan set at 10%, most vending machines products are priced as follows: 185-350 ml cans of juice sell for 130 yen, 490-600 ml bottles sell for 160 yen.

On the other hand, it can also be said that the number of users has recently been steadily recovering, as Japanese people have begun to transition from cash to electronic payments, and electronic payments have become possible at vending machines. After all, the secret behind the strong popularity of vending machines in Japan is the fact that products can be purchased easily, without having to queue at the register or come face-to-face with the seller when paying.

FYI: How to Use a Vending Machine

The procedure of buying something from a vending machine will depend on your chosen method of payment. If using cash, you will first insert the cash into the machine. In addition to 1,000 yen bills, machines accept 500 yen, 100 yen, 50 yen, and 10 yen coins. 1 yen and 5 yen coins are not accepted, and a lot of machines do not accept notes other than 1,000 yen. Once you insert the cash, select the product you would like to purchase. If you've inserted enough money, all that's left is to push the button for your product. The product will drop down into the compartment at the bottom, and change will be dispensed from the machine at this point as well.

On the other hand, if using electronic payment, you must first select the product you wish to purchase, which will light up the button underneath it. Then hold your electronic payment card or device, such as a transportation IC card (a rechargeable card that can pay for transportation, vending machines, restaurants, and so on) over the card reader next to the coin slot, and you will hear a beep once payment is complete. The machine will then release your purchased product to the compartment at the bottom of the machine.

Although vending machines are installed throughout cities in Japan, the products on offer depend on the machine. There are various types of products, including soda, coffee drinks, probiotic drinks, water, tea, alcohol, cigarettes, ice cream, sweets, cup ramen, snacks, and so on. You will also find a lot of products that are only sold in vending machines, or limited sizes that are not available elsewhere in convenience stores or supermarkets.

If you see a vending machine on your next trip to Japan, why not try and purchase a drink of your choice? It might be interesting to compare the taste of world-famous drinks between Japan and your home country, or try drinks that are unique to Japan. Either way, it will be a useful way to spend some of your leftover cash.

Keisuke Tsunekawa
A Japanese native who likes to escape Tokyo city life from time to time to discover new trails in other countries, where I enjoy connecting with something completely different from what I am used to. keisuke.tsunekawa@d2cx.co.jp