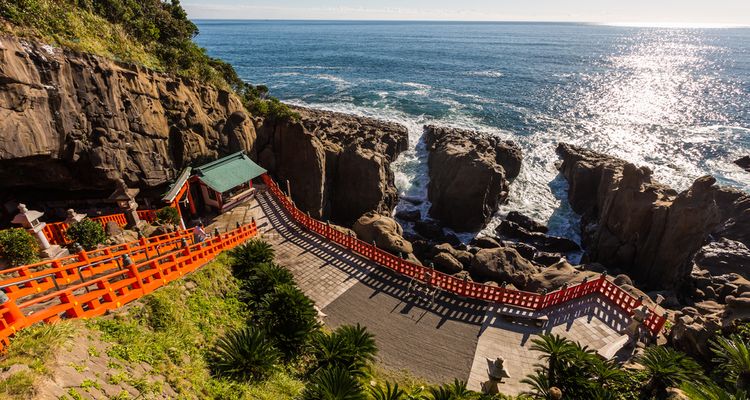 Miyazaki Prefecture, located on the southernmost main Japanese island of Kyushu, is famous for being the setting of many Japanese legends and one of the most spiritual places in Japan. Of course, this means that the prefecture is covered with many sacred shrines. This article will introduce five of the most famous and picturesque shrines, along with their divine origins.

The Spiritualism of Miyazaki Prefecture

Miyazaki Prefecture has lots to offer in terms of local culture, with a relatively warm climate, untouched nature, and decadent local cuisine. Even so, another thing that sets Miyazaki apart from many other locations in Japan is its incredible spirituality and connection to the Japanese divine. Many locations in modern-day Miyazaki are introduced in the Kokinshu and Nihon Shoki, two of the oldest Japanese mythical and historical anthologies. Locations in the prefecture play parts in the stories of both myths and important historical figures, and it is even believed that the divine founder of the land of Japan landed in Miyazaki and began his journey there, him and other legendary beings making their way across the land to establish the country now known as Japan.

Shrines across Japan are dedicated to and enshrine Japanese deities, but Miyazaki has a relatively large amount of shrines that are devoted to gods that are mentioned in the mythical creation and founding of Japan. This adds to the spiritual importance of Miyazaki's shrines, which represent and memorialize the divine beings who helped shape Japan into what it is today.

Udo Shrine is a place of incredible historical significance, as it is the mythical birthplace of the father of Emperor Jimmu, the legendary first emperor of Japan. Two large breast-shaped rocks called the “Ochiai-iwa” are said to have belonged to Princess Toyotama, the daughter of the Sea God, and the grandmother of Emperor Jimmu. These rocks aided in the healthy upbringing of her children, and supposedly nourished Emperor Jimmu as well. Due to these legends, it is understandable that many parents visit the shrine to pray for safe births and for their children to grow healthy and strong, and it is believed that drinking the water from these rocks will help with those causes. The shrine is also said to be lucky for couples and newlyweds.

The shrine is in a beautiful and rare location for a shrine, as the main hall is located inside a cave. The scenic path to the shrine follows the coastline that runs along a cliff overlooking the Pacific Ocean. Following the main path will lead you to the “Shin-mon,” or the “God Gate,” and once you step through it you are considered to be in a divine realm, so it is important to show the utmost respect! Before heading into the cave, soak in the scenery of the ocean, and try your hand at throwing some “undama,” or “lucky balls!” Getting the small, clay balls to land in the target is said to make your wish come true.

Amanoiwato Shrine appears in both the aforementioned Kojiki and Nihon Shoki, described as the location where the legendary sun goddess Amaterasu hid in a cave behind a giant rock door, plunging the world into darkness. The shrine is built right by a cave where Amaterasu is said to have hidden herself, while the nearby Amano Yasugawara (shown in the photo above) is where millions of other deities gathered to try and figure out how to lure her out. Hence, the buildings of this shrine are all dedicated to Amaterasu.

Due to being incredibly sacred, visitors are not allowed at the cave, but it is visible from the shrine's Nishi-hongu, one of the main shrine buildings. A short walk along a path will take you to another large cave with Amano Yasugawara and its lonely torii gate, and where you can see hundreds of small stacks of stones. The reason for this is that it is believed that if you make a small tower of stones and make a wish on it, your wish will come true. Seeing all these small towers truly adds a mystical element to the landscape.

Chrysanthemum motifs decorate the grounds of this shrine, as it is an imperial shrine due to the fact that it enshrines deities that are related to the mythical founding of Japan. According to the Kojiki and Nihon Shoki, Amaterasu’s grandson, Ninigi no Mikoto, came down to Mt. Takachiho in Miyazaki and founded Yamato, the original name for the nation of Japan. The deities that are enshrined at Takachiho Shrine are the Takachiho sumegami (three generations of gods that play a part in the Himuka myth, the story from Japan's creation to Emperor Jimmu), three generations of Ninigi no Makoto’s family, and the elder brother of Emperor Jimmu and his family.

Nestled in a grove of magnificent trees, the shrine itself is said to be over 1,800 years old, and the oldest tree is believed to be approximately 1,000 years old. One of the most famous points of Takachiho Shrine is the Meoto Sugi, or the “Couple Trees,” two cedar trees that grew close enough together that their roots have become intertwined. It is believed that if a couple holds hands and walks around the trees, they will be blessed with happiness. On the grounds also stands Kagura Theater, which hosts performances of famous stories about the Japanese gods.

Kirishima Higashi Shrine is located at the base of Mt. Takachiho, which is why it is understandable that it is said to house the halberd of Ninigi no Mikoto that he used to mark the spot of his descent to earth. The main deities that the shrine is dedicated to are also none other than Izanagi and Izanami, the two legendary gods that created the Japanese archipelago and the parents of several high-profile deities such as Amaterasu (who is also enshrined here). The shrine also has a spectacular view of Lake Miike, which is believed to be the home of a dragon.

The shrine stands upon a rather steep hill and is surrounded by trees, only adding to its mysterious atmosphere. The main hall is believed to have been built in 1722, although repaired numerous times over the years. Meoto Sugi stand fast on these grounds as well, connected by a traditional rope. Due to being fairly distant from the city, the air is fresh, and looking across the view from the mountain while breathing the clean air adds to the spiritual vibe. Kirishima Higashi Shrine is also one of the Kirishima Rokusha Gongen: six shrines that are scattered across Miyazaki and Kagoshima Prefectures and are considered important in the stories of the founders of Japan, both mythical and historical.

Aoshima Shrine is located on the small Aoshima Island and can be accessed by crossing Yayoi Bridge, a short bridge that connects Aoshima Beach and the island. The island was actually closed to the general public until the Edo period (1603 - 1868) as the island is considered sacred. The red torii gate that stands on the path to the shrine is the gate to the divine realm. Aoshima Shrine is linked to Umisachihiko and Yamasachihiko, the two sons of Ninigi and his wife, Konohananosakuya-hime. As Yamasachihiko was the grandfather of Emperor Jimmu, he is enshrined here along with his wife and another mythical being called Shiotsuchi no Okina. The shrine is also said to bring good fortune in childbirth and marriage, as well as safety at sea.

The island is covered with greenery, home to many tropical plants and palm trees. It’s a magnificent sight seeing the trees decorated with hundreds of “ema,” wooden slabs where shrine-goers write their prayers and wishes. Following the ema down a path takes you to the Moto-miya, the original site of prayer at Aoshima. Here, you can test your luck by throwing ceramic plates and shells into a roped-off area to have your wishes granted and to ward off bad luck.

Miyazaki Prefecture is a land of divine legend and spiritualism, and it is undoubtedly a must-see when exploring Japan. Miyazaki prides itself on the important role the area played in the mythical founding of Japan and the many appearances in the Kokinshu and Nihon Shoki. Be sure to experience the mythical for yourself as well!

Miyazaki Prefecture is just one out of the seven different prefectures that make up Kyushu, arguably Japan's most scenic and historic region. If shrines such as Udo Shrine and Aoshima Shrine are right up your alley, we think you'll love what the rest of Kyushu has to offer. Check out the official Kyushu tourism website for more information on what's out there in the region.