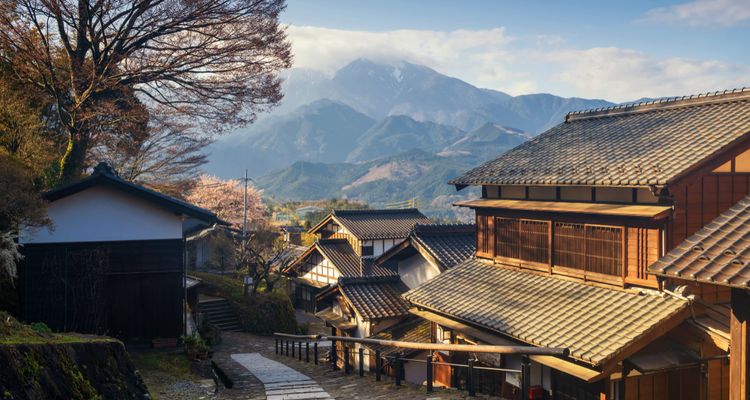 Experience a Historical Journey in the Footsteps of Japan's Ancestors: The 3 Great Ancient Pilgrimage Routes of Japan

In Japan, ancient paths that were paved by its ancestors still remain today. This article will introduce what are known as "The 3 Great Ancient Pilgrimage Routes of Japan", which include the Kumano Kodo, Oku no Hosomichi, and Nakasendo. If you can muster the energy, visiting one or all of these routes is an incredible way to get to know and appreciate the history of Japan.

The Kumano Kodo crosses through Mie Prefecture, Nara Prefecture, Wakayama Prefecture, and Osaka Prefecture. From ancient times, noblemen such as former emperors and women of royal status, as well as commoners have made the pilgrimage to Kumano Kodo. In 2004, it was designated as a UNESCO World Heritage Site as part of the Kii Mountain Range's sacred areas and pilgrimage routes.

Hosshinmon Oji serves as the entrance to the Kumano Hongu Taisha, a Shinto shrine. There are a few walking paths here, and there are guided tours as well, so first-timers can comfortably pay a visit to the shrine.

The easiest path is the course that runs from Hasshinmon-oji to Kumano Hongu Taisha. With ancient stone-paved paths, rice terraces, tea fields, and paths that cut through villages, there is no shortage of beautiful views that can be experienced on this walk. Take the opportunity to bask in the greenery of the forest to experience a sense of tranquility.

The gods are said to have descended to the Kumano Hongu Taisha around 2,000 years ago. Pilgrimages to Kumano were quite popular during the Heian period (794 - 1185), and many nobles, including Emperor Go-Shirakawa and Emperor Go-Toba, have trekked on this path in the past. If you visit, it is highly recommended that you visit the Kumano Hongu Heritage Center and bathe in Kawayu Onsen, the only onsen (hot spring) you are allowed to bathe in that has been registered as a World Heritage Site.

Matsuo Basho (1644 - 1694), the author of Oku no Hosomichi, one of the major texts of classical Japanese literature, was the most famous poet from the Edo period (1603 - 1868). The book is a series of travel sketches in which Basho detailed his journey starting on a boat on the Sendaibori River along a villa called Saito-an in 1689. Saito-an belonged to Basho's disciple Sugiyama Sanpu, and Basho visited it before embarking on his travels. Currently, you can find the remains of Saito-an where a bronze statue of Basho has been erected.

Risshaku-ji Temple (also called Yamadera) in Yamanashi Prefecture is a sacred mountain temple site of the Tiantai school of Buddhism that was opened in the year 860. It was here that Basho composed the haiku,

"How still it is here

Stinging into the stones

The approximately 30 temple halls vary in size and blend beautifully with the surrounding nature in all four seasons throughout the year.

As Basho gazed upon the scenery atop the hill of Takadachi in Iwate Prefecture, he composed the haiku,

Later, Basho visited the Chuson-ji Temple, built in 1124 by Kiyohara of the Northern Fujiwara noble family. There, he wrote:

"Have the rains of spring

Spared you from their onslaught,

The last destination in Basho's Oku no Hosomichi is located in Gifu Prefecture's Ogaki City. Basho arrived on this land in the fall of 1689, after five long months of travel. If you find yourself in the area, it is highly recommended that you walk around these areas that have a special connection to Basho and walk where he once walked.

The Nakasendo road has been maintained since 1601, and in earlier times, it was referred to as the Tosando road, an ancient road that connected the divided lands of the capital and Eastern land. Later in 1716, the shogunate renamed the road Nakasendo (naka meaning "inside/central") because it runs through the middle of Honshu, Japan's main island. The mountainous landscape of the road made it an arduous journey to travel along. Starting from the Nihombashi area in Tokyo, the first post town one would come across was the Itabashi inn, about a two-hour walk away.

Tsumago-juku in Nagano Prefecture is part of a nationally selected Preservation District for Historic Buildings, and was the 42nd post town from Itabashi. As perhaps the greatest remaining mountain castle in the town of Kiso, the remains of Tsumago Castle were considered of utmost importance. The post town is now maintained by locals in the area. Stepping foot in the town will make you feel as though you have slipped back in time.

Magome-juku in Gumma Prefecture is the 43rd post town from the Itabashi post town. The residences here were built by stacking stones on steep slopes, and there are many monuments that record the visit of important historical writers and poets such as Matsuo Basho, Masaoka Shiki, and Toson Shimazaki.

Ochaya Yashiki in Gifu Prefecture was an inn facility exclusive to the family of the shogunate; today, only the remains can be found. It was visited by nobles (who were or became shogun), such as Tokugawa Ieyasu and Tokugawa Hidetada. The emptied moat and earthwork fortification can still be found at the remains, and in 1976, the site was designated as a valuable historical remain of Gifu Prefecture.

Throughout its long history, these ancient paths have been traveled on by countless people. The historical value is present, of course, but the natural and cultural value is also prevalent in these routes. If you want to truly experience the historical past of Japan, why not walk where the ancestors of Japan once walked, from nobles to commoners, to also become a part of their history?