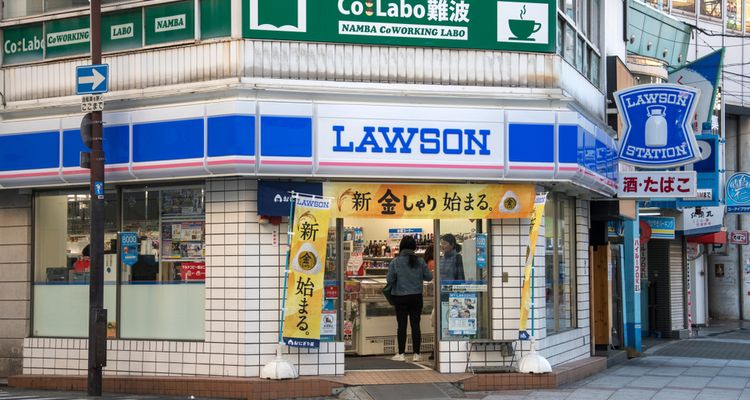 Visitors to Japan simply have to check out the country’s famous convenience stores. They’re an indispensable part of everyday life here. Not only do they sell food items such as bento (lunch boxes), noodles, snacks, cup noodles, fried foods, and coffee, but they also, true to their name, conveniently carry a wide range of daily necessities. One of the most popular convenience stores in Japan is “Lawson,” the idea behind which is "a relaxing rest station in your town.” This chain develops its products by paying close attention to the customers' needs, which has earned it loyal fans of all ages. In this article, we'll introduce Lawson's 15 bestselling items.

Beverages: Try a Perfectly Blended, Flavorful Drink for Yourself!

With the low price of 150 yen and an authentic flavor that stands up to specialty coffee shops, it’s easy to see why Lawson’s cafe latte is so popular. The chain is serious about their coffee, using only a blend of Rainforest Alliance-certified beans grown with care on selected farms in Brazil, Nicaragua, Tanzania, Colombia, and Guatemala. While this coffee has a richer milk flavor than ones from other stores, the creaminess is balanced out by the bitterness of the beans to create a mild flavor that's earned a lot of fans. The look of the cup also changes from season to season. Pictured here is the spring 2020 version with a cute flower design.

Made with 100% unprocessed milk, this authentic iced latte delivers the perfect balance of the rich, slightly-sweet flavor of milk and the bitter notes of espresso. If you've worked up a thirst, a double-sized Mega Iced Cafe Latte is also available. This iced latte is made by extracting as much of the coffee beans’ flavor and aroma as possible, then pairing it with raw milk that has been chosen for its richness and sweetness. Try this blissful combination for yourself!

Lawson's mellow Tapioca Milk Tea is made from fragrant Assam tea and fresh Hokkaido cream. In 2019, a "tapioca boom" swept through Japan. This trend was so popular that a new verb, "tapiru" (think "tapioca-ing") cropped up to describe drinking tapioca tea, and now the drink has become a permanent part of life in Japan. Following the trend, Lawson launched their own popular Tapioca Milk Tea, which uses fragrant black tea to create a mildly sweet milk tea blend that goes perfectly with the soft and chewy tapioca. This drink is perfect when you're in the mood for something a little sweet, and it can even serve as a light snack.

Lawson's Premium Roll Cake was one of the items that helped cement sweets as an indispensable part of Japanese convenience stores! Over 250 million of these cakes have been sold since the series was first launched in 2009. Made with premium beet sugar and wheat flour, the soft cream and sponge give this luxurious roll cake a soft, fluffy texture with a milky flavor that melts in the mouth. You can eat the cake straight from the plastic container with a spoon, so there's no mess. Don't look down on this cake just because it comes from a convenience store! We highly recommend giving it a try when you're in Japan and discovering for yourself how delicious it really is.

Out of all the convenience store sweets launched in 2019, Baschee made the biggest impact. This treat was designed based on cheesecakes from Basque, a region that straddles France and Spain. The cake has a smooth texture that falls between a baked and cold-set cheesecake, with a rich cream cheese flavor and a fragrant caramelized surface.

Baschee saw incredible sales after it was launched in March 2019. A million cakes sold in just three days, and in five months, that number rose to 20 million. Included in Nikkei Trendy's 2019 Top 30 Hit Products list, Baschee has overtaken the incredibly popular Premium Roll Cake as Lawson's new signature sweet. Try this cafe-quality treat out for yourself.

This treat was designed with the novel idea of making a strawberry shortcake that could be eaten from a cup rather than a dish, and with a spoon rather than a fork. Tart strawberries are sandwiched between layers of soft sponge cake enveloped by fresh Hokkaido cream. There are actually four different flavors in Lawson's CUPKE series. In addition to the strawberry shortcake, there's also Chestnut Mont Blanc, Tiramisu, and Chocolate Cake. These items were launched only in October 2019, but will surely become new Lawson classics.

Karaage-Kun was a pioneer of convenience store hot snacks in Japan. In the 33 years since its launch, over 3.3 billion packs have been sold. That's over 130 million a year! Costing 210 yen for a 5-piece pack, Karaage-Kun comes in regular, spicy (red), and cheese flavors, as well as a range of seasonal varieties like seafood curry, carbonara, yuzu-ponzu vinegar, spicy black sesame, and more! Just one bite is all it takes to get hooked!

Crunchy on the outside, juicy on the inside! L-Chiki is the name of Lawson's fried chicken brand. Rice flour is used to give this hot snack a satisfying texture while keeping the meat tender. There is a range of flavorings to choose from, including salted, spicy, sweet and spicy, garlic, and butter soy sauce.

Toke-Koro (“Melty Croquette”) is a new hot snack first introduced in January 2020. Its biggest feature is its filling, which includes a Japanese pork and potato base seasoned with nutmeg and black pepper, and a secret white sauce that adds a richness to the mix.

Unlike the regular and cream croquettes that you'll commonly find in Japan, Lawson's Toke-Koro has a unique mix of a crispy outer layer and creamy center. The filling melts in the mouth, allowing you to enjoy the delicate taste of potato and pork. Add the special sauce that comes with each Toke-Koro to add a sour kick to the snack. Try eating half on its own and half with the sauce to experience two worlds of flavor.

There’s also a second item in the same series as the Toke-Koro: Afure-Menchi ("Overflowing Mince Cutlet"). Don't miss the way the mince cutlet filling oozes out with each bite!

In Japan, "mixed sandwiches" are a staple food. These three-in-one sandwich packs that include egg salad, tuna salad, and ham and lettuce, are both filling and a great deal, which has made them a popular choice among people of all ages. Japanese convenience store meals in general are of such high quality that they stand up to specialty stores, a fact which has earned these chains fans both at home and abroad. Definitely visit one for yourself if you’re ever in Japan.

Mochi Choco-Pan is a treat made with light and doughy pastry, chocolate chips, and chocolate cream, all baked to an aromatic finish. With its moist, chewy texture, this addictive pastry is impossible to put down! Another key to its popularity is the fact that you can heat it up in a toaster oven to make it even more aromatic and delicious.

Onigiri and Side Dishes: Which Rice Balls are Popular in Japan?

This Lawson onigiri, with its premium shari (sushi rice) is a must-try. The rice ball is made with carefully-grilled fatty salmon that has been salted with koji, a traditional Japanese flavoring made from malted rice. The onigiri itself is sure to satisfy thanks to its generous size. The delicate salty taste pairs perfectly with the rice to create a flavor combination that has become a Japanese favorite.

The popular Akuma Onigiri, or "Devil's Onigiri," gets its name from the fact that it's so delicious, you might find yourself eating more than you meant to... Rice flavored with dashi stock and tempura breading, tempura sauce, aonori seaweed, and sea lettuce work together to create an addictive flavor that's incredibly popular in Japan.

This onigiri was a monster hit! A whopping 2.65 million rice balls were sold in the first 13 days after its release in 2018. Before its introduction, Lawson's best-selling onigiri was the ever-popular tuna mayonnaise flavor. As big a hit as it was, the Devil's Onigiri quickly knocked it off its perch.

If you're interested in trying authentic Japanese cuisine during your trip, there are some items of interest you can check out at the convenience store. Lawson's Salt-Grilled Sockeye Salmon, sold in a tray, is characterized by its deep-grilled, smoky flavor that is highly savory and whets the appetite. The salt seasoning is mild, while the fattiness of the meat doesn't overwhelm the flavors. The fish is deboned, which means you can heat it up in the microwave and eat it right away. It's not just delicious, it's designed to be super convenient!

We tend to eat out a lot on vacation. If you're feeling like you've started to overdo it on the restaurant food, try a convenience store salad. Many people try to eat a salad at least once a day to maintain a balanced diet, often getting something at the convenience store. Lawson offers a wide range of healthy options, but the Tuna & Corn Salad is particularly popular. Keep in mind that dressings are sold separately.