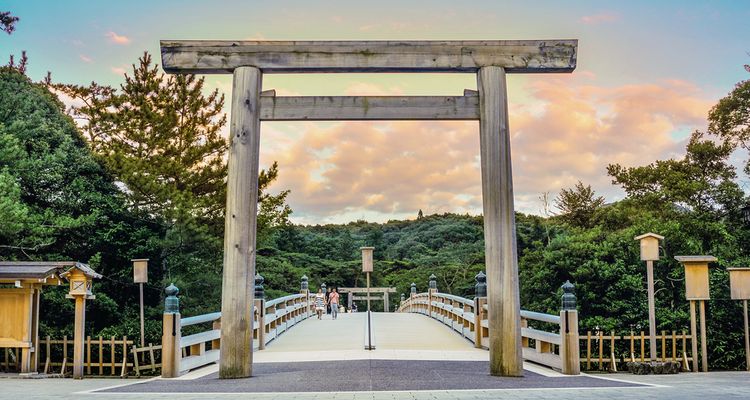 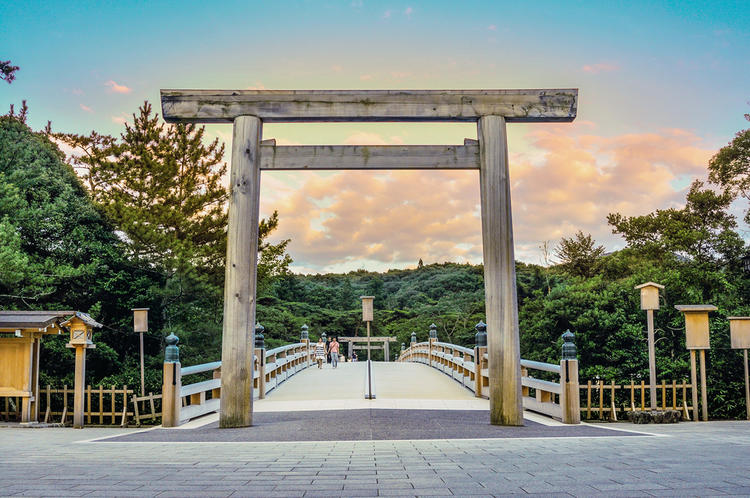 With beautiful sea, mountains and ancient mythology, you will be amazed by what this prefecture has got to offer. Some of the places hold historical importance and are registered as the prestigious world heritage sites. We have selected 15 spots not to be missed when you are travelling Mie. Ise Jingu is the most sigificant shrine of the entire nation. It is dedicated to worship Amaterasu Omikami, the solar goddess with the legend as the ancestor of today's Emperor. In the olden days only the emperors and those approved by him/her were permitted to enter. Today most of the areas within the premises are open to public. Toyouke Omikami, the goddess of agriculture, wellbeing and industry, is worshipped at Geku. It was built approximately 1500 years ago under the the instruction of the then emperor. The protocol is to visit this Geku first, then the Naiku. Ueno Castle was constructed during the civil war era in the 16th century and was used until the 19th century. The current central tower (天守閣 - tenshukaku) was restored in 1935.  Castle park within the site is open for the public. There are also museums commemorating Basho Matsuo, the famous haiku poet, and  Iga-ryu Ninja. Iga-ryu Ninja is the most famous ninja clan.  A house tour full of traps, display of ninja tools, and ninja performances are some of the highlights at this museum.

The works of the highly acclaimed haiku poet Basho Matsuo between 1644 and 1694 were highly artistic and they still hold popularity to this day. Iga was his birthplace hence this museum commemorating his lifework was built here.  Many of Basho's handwritings are on display. The castle was built by the younger brother of Nobunaga Oda in the midst of Japanese civil war. During the Edo period the local lord (Daimyo) maintained and renovated the castle with surrounding area prospering as the city center of Mie. The main tower tenshukaku was demolished during the Meiji Restoration but part of the castle and the Japanese-style garden were restored. Matsusaka Castle was founded in civil war era. The central tower was demolished but the ruins of stone walls still remain. You can enjoy good view of the city from the top of stone walls. Within the site there is a museum of Norinaga Motoori, the famous scholar in Edo period. Norinaga Motoori was a scholar of Japanese classical literature and philosophy in Edo era. He contributed to the interpretation of Kojiki, a Japanese chronicle literature of ancient mythology, leading up to the creation of the first emperor. His research on how Japanese society and culture evolved was significant. Norinaga's residence from the age of 12 to his death at 72 with the study room named Suzu-no-ya (Room of Bells) is restored as a museum. These houses for castle guards and their families were built circa 1863. They mostly retain their original form. The site has been designated as a nationally important cultural property.

The god of prosperity is worshipped at this popular shrine. A festival called Nihon Ichi Urusai Matsuri (日本一うるさい祭り) which translates as 'the most noisiest festival of the entire nation', is held annually on the first Sunday of August. Located in southern part of Mie Prefecture, this ancient pilgrimage route was registered as a UNESCO World Heritage Site in  2004. It is a collective site of old roads for pilgrims that lead to shrines including Ise Jingu. Today they are open to the public and anyone can walk through. This shrine is dedicated for the worship of Sarutahiko who is featured in Japanese mythology. Because he is the god of guidance and road travel, there are many worshippers around the nation and is a very popular figure.  Various shrines dedicated to Sarutahiko are branched out from this grand shrine. There is even an overseas branch shrine in Washington State, America.

For approximately 660 years from the end of the 7th Century, an unmarried maiden from the Imperial House was appointed to serve ceremonial duties on behalf of the reigning emperor at Ise Jingu. Saiku was the palace for such maidens. The site has not retained much from the olden days but the museum displays historic objects as well as the miniature restoration of the Saiku. You can try on the traditional twelve-layered kimono, Junihitoe (十二単), worn by women in ancient times. Onigajyo is registered as a UNESCO World Heritage site. It is a coastal line erupted from a large earthquake, which then was carved by sea waves and gusty winds over a long period of time. The coast stretches for about 1km in distance with numerous caves and rocks of all sizes. There are reins of a castle from the civil war era on the peak.

Doro-kyo is a valley on the upper stream of Kumano River. The ravines that stand straight on the riverside in the wild settings are one of the most picturesque sceneries you would come across in Japan. You can enjoy boat tours as well as rafting.