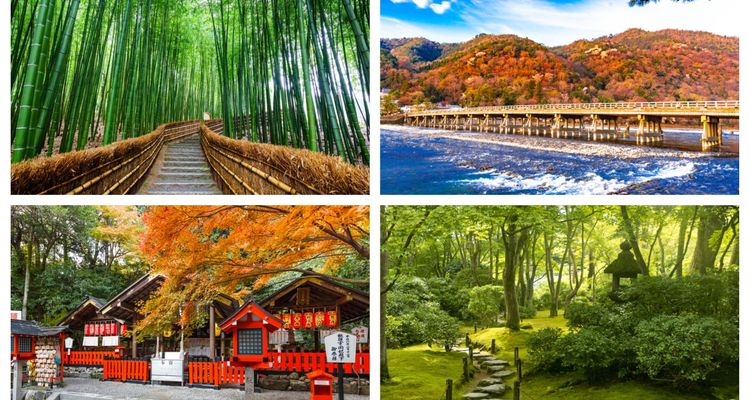 14 Sights You Can't Miss When You're in Arashiyama!

When you think of Kyoto's Arashiyama, the first things that come to mind is probably the Togetsukyo Bridge and the Bamboo Grove. In fact, there are so many great things to do and see here that it would be a shame to miss out on any of them. The more you learn about this historic area the more interesting your visit will be, so read on to find our best picks of what to see in the elegant Kyoto area of Arashiyama.

Arashiyama is a designated Place of Scenic Beauty known for its gorgeous cherry blossoms and autumn foliage. Togetsukyo Bridge spans the Katsura River which runs through the middle of town, and is known as a symbol of Arashiyama. The bridge is located around a 5-minute walk from Randen Arashiyama Station, so it's easy to access from the Kyoto city center.

It's said the bridge's poetic name, which translates to "moon-crossing bridge", originated from Emperor Kameyama, who once composed a poem remarking that it seemed to him the moon itself was crossing the bridge.

Tenryu-ji is a historical temple that serves as the head temple of the Rinzai Tenryu-ji sect of Zen Buddhism. It's also known as the most important among the Kyoto Gozan, the five most important Rinzai temples in Kyoto. This temple was founded in 1339 by Muso Soseki by decree of the shogun Ashikaga Takauji.

There are many highlights here, including Sogen Pond Garden, which is designated as a Special Place of Scenic Beauty and a historical landmark. Notable artworks include the Unryu-zu (Image of the Cloud Dragon) painted on the ceiling of the teaching hall, the illustrated fusama sliding screens in the large abbey, and the painting of Bodhidharma at the entrance to the priests' quarters. The weeping cherry blossoms by the Taho-den hall are also some of the most stunning in Arashiyama.

This temple is registered as a UNESCO World Heritage Site, so be sure to visit it when you're in Arashiyama.

When talking about what to see in Arashiyama, we can't forget its iconic bamboo grove. Approaching the forest from Tenryuji Temple, you can go through the grove either towards Nonomiya Shrine or towards the Sagano Scenic Railway Arashiyama Station. The station side is considered the entrance, so this may be the better approach.

The forest path is always open, but it's best to avoid the crowds by getting there early to experience this quiet bamboo forest in its untouched state.

You'll want to be sure to drop into Nonomiya Shrine during your stroll through the bamboo grove. This shrine has a long history, and is known throughout Japan due to its mention in the Tale of Genji and its association with Ise Grand Shrine.

Make sure to stop by the turtle stone here to make a wish. Rubbing it is said to ensure your wish will be granted within a year. You'll see plenty of women worshipping here because this shrine is known for being a place to pray for marriage and safe childbirth.

Another unmissable attraction located near the Sagano Scenic Railway Arashiyama Station is Okochi Sanso Garden. Located in the scenic Mt Ogura area, known for being where the Ogura Hyakunin Isshu collection of poems was compiled, the Okochi Sanso Garden was laboriously created over many years by Denjiro Okochi, a famous actor of the early Showa period.

At 1,000 yen, entrance to the garden may seem a little on the expensive side, but the entry price includes matcha tea and a Japanese sweet. Taking the moment to relax in the gardens over tea gives you a real sense of Kyoto's elegant atmosphere, so a visit to this spot is highly recommended.

Sagano Scenic Railway is a sightseeing trolley train  that re-purposes the once disused JR Sagano Line. The cars are decorated in a classical art-deco style, and there are some windowless cars where you can take in the fresh Sagano air. These cars are very popular, but only same-day tickets are available. (Standard tickets can be reserved in advance.) Please also be aware that same-day tickets for the open air cars may not be available in the case of bad weather.

This sightseeing train passes mainly through beautiful scenic landscapes, so its average speed is around 25 kilometres an hour⁠— just the right speed for riders to appreciate the seasonal beauty of the valley. The 7.5 km route through the natural surrounds along the Hozugawa River takes a relaxed 25 minutes.

The first station on the line, Torokko Saga Station, has a train diorama that kids are sure to love, so waiting for train here is a fun experience, too.

Rakushisha is a thatched-roof hut that was once the residence of Mukai Kyorai, a disciple of haiku poet Matsuo Basho. There are around forty persimmon trees surrounding the hut, and its name, which translates to "Fallen Persimmon Hut", comes from an unfortunate incident where all the fruit from these trees, which Kyorai had intended to sell, fell one night in a storm.

A little removed from the main Arashiyama areas, Rakushisha is surrounded by a timeless atmosphere. Make sure to visit the hut that Matsuo Basho himself once liked to stay when you're in Arashiyama.

Mt Okura was once the residence of the aristocracy in the Heian Era. There are many beautiful autumn foliage spots here, but perhaps the most famous is Jojakko-ji Temple. A little removed from the center of Arashiyama, this temple is comparatively free from crowds outside the autumn season.

This temple is also known for once being the site of the poet Fujiwara Teika's Shigure-tei villa. There are many other remaining buildings worth seeing here, including the Tahoto Pagoda, a two-storied pagoda with a beautiful hiwadabuki (cypress shingle) roof, and Niomon Gate, which has an unusual straw thatched roof.

Nison-in Temple is a Tendai Buddhist temple, and is named after the fact that there are two principle images of worship here, one of Buddha and one of Amitabha. The 200 meter path to the temple past the main gate is known as the "autumn leaf riding grounds". As the name suggests, this is a very popular spot for taking in Arashiyama's beautiful fall colors.

Gio-ji Temple is quietly nestled in lush forested surroundings. Its full name, Koshozan Ojo-in Gio-ji, comes from the fact that Ojo-in Temple of the Buddhist Jodo sect was once located at this compound.

The temple's name "Gio" was taken from a famous episode depicted in the period epic The Tale of Heike. In this episode, it is said that after having her heart broken by military leader Taira no Kiyomori, a dancer named Gio became a nun here at Ojo-in.

This temple is also known for the beauty its moss garden which is known for its uniquely peaceful atmosphere.

Adashino is an area that has been used as a burial spot for so long that a mention of it can even be found in the medieval essay collection, Tsurezuregusa (Essays in Idleness). The monk Kukai was said to have first established Nyorai-ji temple here, with its name later being changed to Nenbutsu-ji Temple by the monk Honen.

Inside the grounds there are approximately 8,000 stone images of Buddha serving as grave markers for those who died without a proper funeral service. The statues were said to have fallen into disorder before the site was restored by volunteers in the Meiji Era. This area is sometimes called "Sai no Kawara", after the Buddhist concept of a riverbed where the souls of departed children reside in limbo.

The word "adashi" in the place name, which written with the Japanese character for "transformation", represents a prayer that the souls will pass through the cycles of rebirth to reach Sukhavati, or paradise.

A memorial service for the souls of the dead is held at each year at Adashino Nenbutsu-ji Temple on August 23 and 24. This ceremony is called the Sento Kuyo, or "Memorial Service of a Thousand Lights", because in the evenings the stone statues are illuminated with holy lights. These countless statues lit by the glow of faint candlelight makes for a truly a mysterious sight.

Do you know who Hikaru Genji, the main character from the classical novel The Tale of Genji, was based on? It's said that it was Minamoto no Toru, the son of Emperor Saga. The Seiryo-ji temple site originally housed a mountain villa bestowed on Minamoto no Toru by Emperor Saga. After Minamoto no Toru's death, his son built Seiryo-ji Temple's predecessor Seika-ji Temple here. Understanding some of these points of connection to classical Japanese literature is sure to make your exploration of Kyoto's many shrines and temples even more interesting!

Daikaku-ji Temple is the head temple of the Shingon Buddhist sect, and is officially named Kyu Saga Gosho Daikaku-ji Monzeki (Former Saga Imperial Palace Daikaku-ji Temple). The word "monzeki" in its name designates the fact that the position of the head priest here was assumed by members of the imperial family.

A highlight of a visit here is seeing its large pond, which is around a kilometre in circumference and lined by cherry blossom trees. The atmosphere here remains unchanged since it was built, which means this temple is often used as a location for filming period movies and TV.

While head temples often have a more rarefied image, this temple doesn't shy away with engaging with the media. In the past it has collaborated on events with popular comedy agencies as well as with the anime series Touken Ranbu in making themed goshuin stamps for visitors to collect.

If you want a cute and cuddly experience while in Arashiyama, make sure to visit the Arashiyama Monkey Park, which has around 120 wild Japanese monkeys on the grounds.

This park is a little different to other zoos, because here it's the humans who enter the pen! If you want to feed the monkeys, you need to enter an enclosed rest area through which you can feed the monkeys who run free outside. This is a popular sightseeing spot where you can observe wild monkeys up close.

Don't Miss Arashiyama When You're in Kyoto!

Some of these spots are real hidden gems, so when you come to Kyoto, be sure to take the chance to escape the crowds and see something really special. Become a Arashiyama expert and impress all your friends with your stories! Don't miss a chance to explore all you can of this beautiful and historical place.

HANYU HSU
I'm a Taiwanese person living in Japan. I would like to present to the world some information about Japan from my point of view!