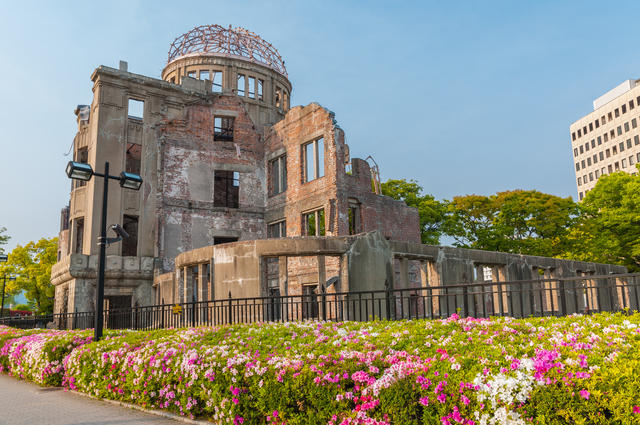 12 Places to Visit when You Are in Hiroshima

Besides the already famous Itsukushima Shrine and the Genbaku Dome, there are many other interesting spots that you should visit in Hiroshima. This article will bring you to the 12 best sightseeing spots in Hiroshima.

Hiroshima Peace Memorial was built in 1915 as Hiroshima Prefectural Commercial Exhibition and due to the atomic bomb that was dropped on 6 August 1945, the structure of the building has changed completely from its original architecture. The metal framework for the dome still remains and the building is more famously known as Genbaku Dome and in 1996, this famous dome was registered as a UNESCO World Heritage Site.

Hiroshima Peace Memorial Park is where the Genbaku Dome, Hiroshima Peace Memorial Museum, the Memorial Cenotaph,  the Atomic Bomb Memorial Mound and other notable symbols like the Peace Bell that is engraved with a borderless world map and the statue of Sadako Sasaki with a golden crane. This memorial park serves as a stark reminder of how the world needs to end all kinds of war and spread more love instead.

Miyajima is one of the top three best places to head to for some breathtaking views in Japan. On this island, we have the famous Itsukushima Shrine that was built during the reign of Empress Suiko in 593. After going through many reconstructions, the shrine is what it is today, a magnificent structure that looks as if it is floating on the sea. It is a revered national treasure and many visitors come to appreciate it and when the tide is low, none would hesitate to head down to the beach to get closer to its structure.

Hiroshima Castle was built by Mori Terumoto, based on a Momoyama architectural style. This castle is known for its strong straight sturdy walls. The castle that we see now was reconstructed in 1958. The main tower of the castle is a historical museum and you can head to the 5th floor, where there is an observation deck that offers you great views of the city.

Shukkei-en replicates the scenery of one of China's famous spots, the West Lake. Here, you can appreciate different flowers blooming depending on the seasons. From March to May, you will get to see cherry blossoms and rhododendrons and from June to August, you'll be amazed by the beauty of the lotus flowers, irises and hydrangeas. During the cooler autumn months from September to November, the park will be filled with camellias, green leopard plants and beautiful fiery red leaves. Then from December to February, come and enjoy different breeds of camellias and plums.

Onomichi is a quaint little town right by the sea that has rolling hills from the east to the west for its background. Take strolls along the slopes here and you will get to see the islands floating on the horizon and the hills from the Shikoku Islands. There are many temples here in Onomichi that have a history of more than 1300 years making it a historical town like Nara and Kyoto.

The main hall of Senko-ji is called Akado and their well-guarded one-thousand-hand Buddha statue will only be displayed for public viewing once every 33 years. The bell tower here is called Toki No Kane and it is rung every year on New Year's day. During spring, people flock here to view the cherry blossoms and in autumn, they organize a chrysanthemum doll exhibition.

Fukuyama Castle was completed in 1622 and was the residence of the Bingo Fukuyama clan that ruled the lands in that period of time. Due to an air raid unfortunately, the main tower of the castle was burnt down. The current structure that we see today was reconstructed in 1966. The newly reconstructed buildings, which include the Tsukimi turret and the bathhouse are now made of strong reinforce concrete. The main tower of the castle serves as the castle's museum.

Takehara is fondly known as the little Kyoto of Hiroshima. There are many old traditional buildings here. The ambience here is just wonderful and this area is recognized as an important cultural area. Stroll along the streets here and you'll get to appreciate the traditional architectural style with its roofs and gables.

The Hiroshima City Transportation Museum is a science facility that showcases all sorts of vehicles and modes of transportation. Within the building itself there are about 3000 exhibits on the railway, land transportation, boats and planes. Not only do you get to see models of various vehicles but there are also interactive exhibitions for you to enjoy. Outside of the building, there is a train car by the number of 654 that was exposed to the atomic explosion back in the past on display.

Taishaku Valley is located at Taishaku River and is a designated National Park that spans about 18 km long. There is a natural limestone bridge here called On-bashi bridge that will take your breath away. The bridge is shaped that way due to the river naturally eroding its limestone walls.  The Dangyokei rapids here offer great views especially during spring and autumn.

At the botanical gardens here you will get to enjoy about 10270 species with 203860 plants flourishing within its grounds. This is a famous spot for cherry blossoms and in spring you should come here to view about 50 different cherry blossom species and the 700 cherry blossoms trees that are dotted across the area. If you ever do come in autumn too, you should head over to the park to catch the maple leaves here.

Looking for places to eat in Hiroshima? Join the most popular food tour, Hiroshima Bar Hopping Food Tour, and you'll not only be taken to eat some really tasty Hiroshima-style okonomiyaki, but you'll also go around to hidden local izakaya in Hiroshima which tourists find difficult to enter on their own! With this tour, you'll be able to chat with some locals while enjoying authentic Japanese izayaka foods with a round of drinks!