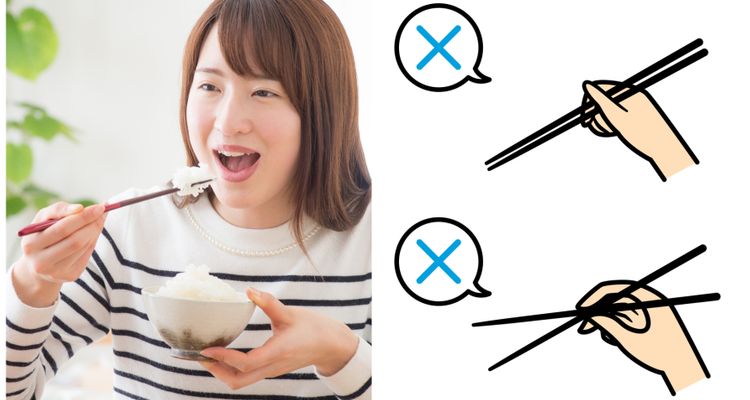 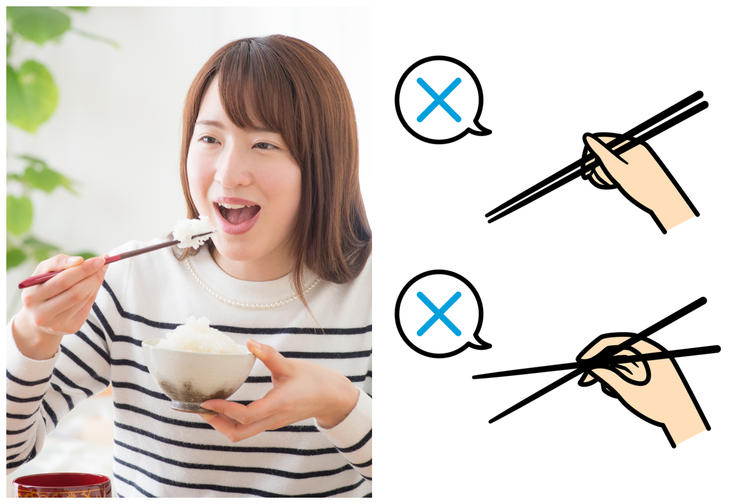 10 Things You Should Avoid Doing When Using Chopsticks in Japan

Chopsticks are an indispensable tool when it comes to eating in Japan, and there are many rules and etiquette concerning proper chopstick use. While other countries, particularly in Asia, also commonly use chopsticks, there are some unique rules specific to Japan that you would be wise to know. Keep reading to find out the dos and don'ts of using chopsticks in Japan so you don't make any accidental faux pas during your visit!

Japan is one of the many countries in the world to use chopsticks as a dining utensil. It is believed that chopsticks were first brought to Japan from China in the 7th century and spread thoughout the country via the influence of Shotoku Taishi, a prominent politician from the Asuka period (592 - 710).

In the following centuries, Japan developed its own culture around chopstics, and now there is a set of established manners and etiquette for eating with them. In fact, there is even a specific word used to denote the things that you shouldn't do with chopsticks - "kiraibashi." Kiraibashi includes actions that are deemed rude, unpleasant to those around you, and/or disrespectful to the people who made the food you are eating.

This article will introduce 10 things to keep in mind when using chopsticks in Japan so as not to offend those around you. Of course, you don't have to worry so much if you are not that skilled at using chopsticks yet, as they can take a while to truly master. However, once you learn the proper manners of chopstick use in Japan, we urge you to do your best to follow them while in the country.

1. Don't Tap Your Chopsticks Against Tableware

Holding your chopsticks like drumsticks and tapping on plates or glasses is called "tataki-bashi" and is considered very rude. In addition to the unpleasant clinking sound it makes, this act is also considered quite childish. In addition, there is an old suspicion in Japan that tapping againt bowls draws evil spirits, which may be another reason for this etiquette rule.

Using chopsticks to pass food between people is called "watashi-bashi" and is considered a big no-no when eating. This is because it resembles the ceremonious passing of bones with chopsticks that takes place in Japan after a loved one has been cremated. If you're giving some food to one of your dining companions during a meal, please do so by first placing the food onto a small plate, and then handing them the plate.

3. Do Not Rub Disposable Chopsticks Together

You will often see disposable wooden chopsticks at restaurants and convenience stores in Japan. Even though these are cheap chopsticks that are to be thrown away after one use, there are still certain rules you should follow when using them. The chopsticks come fused together, so you have to break them apart into two separate chopsticks before you use them. After breaking them apart, some people will rub the chopsticks vigorously against each other in order to get rid of any small fragments of wood. This is actually a kiraibashi called "kosuri-bashi." It's seen as disparaging to the convenience store or restaurant that supplied the chopsticks as it sends the message that you think the chopsticks are of low quality. If you notice any wood fragments left on your chopsticks after breaking them apart, please discreetly remove them with your hand.

4. Do Not Stick Chopsticks Straight Up in a Bowl of Rice

Sticking a pair of chopsticks straight up in a bowl of rice is called "tate-bashi" and considered the single most egregious chopstick taboo in Japan. This is because, similar to watashi-bashi, this act resembles a ceremonial act performed for those who have passed away, as bowls of rice with chopsticks stuck into them are offered at Buddhist funerals. In addition to evoking unwanted thoughts of death while dining, this act is also considred bad luck, so you should definitely be careful not to do this while in Japan. If you want to place your chopsticks somewhere, please place them down horizontally on a plate. While placing your chopsticks horizontally on top of your rice bowl isn't considred rude, you may still want to avoid it as it can have the meaning of "I do not want to eat anymore."

5. Do Not Cross Chopsticks into an X Shape

6. Do Not Say "Itadakimasu" (Thank You for This Food) While Holding Chopsticks

In Japan, you are supposed to put your hands together and say "itadakimasu" (literally, "I humbly receive [this food]") before taking your first bite during meals. As Japanese cuisine has become more popular overseas, there are probably many people aborad who even know this term, as well as "gochisosama," which is said after the meal is completed. One thing you should note is that you shouldn't say "itadakimasu" while already holding chopsticks. This kiraibashi is called "ogami-bashi," and it came about because it is considered rude to show off the ends of your chopsticks to others. So, when dining in Japan, please make sure to pick up your chopsticks after you have already said "itadakimasu."

7. Do Not Use Chopsticks to Pull Plates/Bowls Toward You

Using your chopsticks to pull a bowl or plate closer to you is called "yose-bashi," and is something you'll want to avoid doing while in Japan. In addition to being rude, this can cause unpleasant sounds as the plates slide across the table, and it can also cause liquids such as soup to spill over and make a mess. When you want to move a plate or bowl closer to you, please do so by picking it up with your hands.

8. Do Not Use Chopsticks to Point at Objects or People

9. Do Not Grasp Chopsticks in Your Palm

While it may be difficult for people from countries where chopsticks are not common to master their use, you should sill try to avoid grasping them in your palm with your hand in a closed fist shape, a kiraibashi called "nigiri-bashi." Also, you should avoid holding your chopsticks with two hands. Doing this can even give the impression that you want to use the chopsticks as a weapon, and may alarm some Japanese people dining with you.

10. Do Not Stab Food with Chopsticks

In Japan, using your chopsticks to stab food instead of grabbing it is called "tsuki-bashi" and is seen as lacking in manners. Some people may want to stab or poke their food with chopsticks as a way to test its doneness, but this is also considered rude as it conveys the message that you don't trust the chef to cook your food properly.

Enjoy Eating in Japan While Remaining Wary of Kiraibashi!

All of these rules for using chopsticks arose out of a desire to make the dining experience pleasant for all involved in the meal. While those who feel that there are too many rules or that the rules are too strict don't necessarily have to follow all of them, everyone should take care to at least refrain from tate-bashi and watashi-bashi, as those are seen as the most disrespectful due to their association with funerals and the dead. Please use this article as a reference during your trip to Japan so that you can impress everyone with your perfect chopstick etiquette.