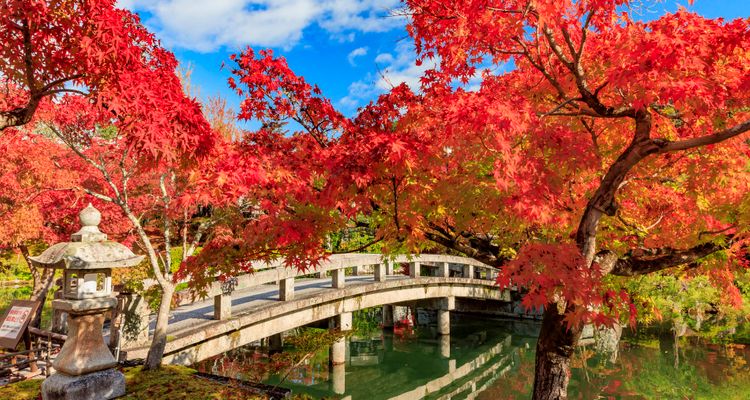 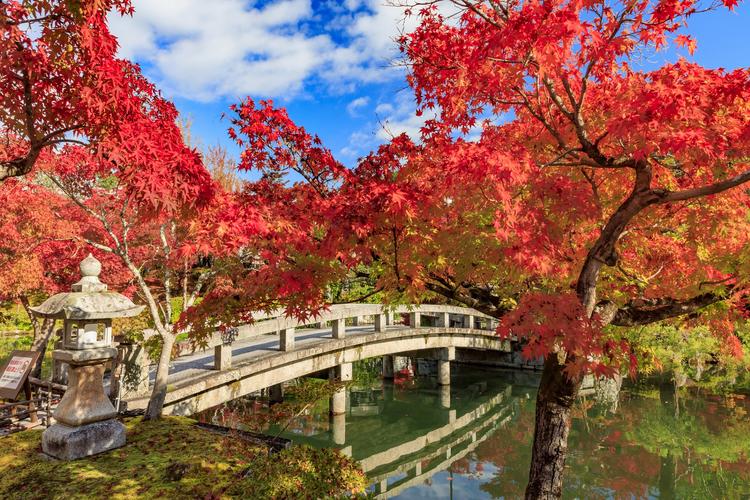 Fun, nature, art, food - autumn is considered one of the most pleasant times to be in Japan! With gorgeous seasonal wonder like fall foliage and blooming flowers, delectable delicacies like sanma fish and chestnuts, and eminent cultural events like the Tokyo Game Show, it’s no wonder autumn sits alongside spring as one of Japan's most celebrated seasons. Here are 10 reasons to visit Japan in autumn!

Alongside the easing of summer humidity, the most distinctive sign of autumn in Japan is the fiery fall colors that burst from the leaves of maple, gingko, beech, sumac, cherry trees, and more. Dazzling autumn foliage can be enjoyed all throughout Japan, with each prefecture boasting its own collection of parks, roads, and promenades showcasing the pinnacle of this spectacle. You can see fall foliage within cities, don some hiking boots and explore the great outdoors, or go for a drive along one of Japan’s numerous scenic roads.

The seasonal harvest of autumn brings in a bountiful haul of fresh sweet potato, pumpkin, apples, chestnuts, eggplant, persimmons, pears, and a whole lot more! If you’re a fan of mushrooms, this is the best time to find exotic varieties like matsutake, maitake, shiitake, and white beech mushroom. There’s also a treasure trove of seafood to sample, such as pacific saury, eel, salmon, oysters, and skipjack tuna.

Despite being a fairly recent trend, Halloween is now one of Japan's largest celebrations. The entire month of October is jam-packed with Halloween decorations, events, food, and more, culminating in gigantic outdoor parties on the night of October 31st and closest weekend in places like Shibuya, Roppongi, and Dotonbori. Many of Japan’s theme parks hold fun and thrilling Halloween events, the most famous being Tokyo Disneyland, Universal Studios Japan, and Sanrio Puroland. There are also large daytime parades in Roppongi, Kawasaki, and Ikebukuro where passionate cosplayers show off their incredible and often terrifying costumes. At night, crowds of dressed-up partygoers flock to the streets of nightlife neighborhoods like Shibuya to let loose and intermingle. While there’s no trick-or-treating, there’s plenty of other fun ways to celebrate Halloween in Japan!

Sitting between the humidity of summer and the chill of winter, autumn is considered one of the most pleasant and refreshing times to be in Japan. While your experience will depend upon the region and circumstances, autumn weather is generally mild and comfortable, with the average daily temperature gradually dropping as the days continue onwards into winter.

While the northern regions of Japan will rapidly become cold after summer, places like Tokyo and Osaka will remain relatively warm until November. This makes it a great time to get outdoors and enjoy the numerous parks and forests. However, be aware that September is typically the beginning of the typhoon season and rainfall will be frequent and heavy. Keep an eye on the weather reports and be prepared to take shelter if required, particularly if you’re visiting the south of Japan.

Sanma, a medium-sized, skinny fish known as pacific saury in English, reaches its peak fattiness and deliciousness in autumn, making it one of the season’s hotly anticipated delicacies. The best opportunity to relish this fall flavor is at the Meguro Sanma Festival, where visitors are served freshly grilled sanma cooked by locals for free! Yes, you read that right - free!

Marking the beginning of autumn, thousands of sanma are given away on the first Sunday of September at the Meguro Station Shopping Street in southern Tokyo. Starting at 10:00 AM and lasting until mid-afternoon, you’ll have plenty of time to make your way to Meguro to get your share. Be aware that lines will be huge and you’ll likely need to wait at least an hour or longer.

One of the top three gaming exhibitions in the world, the Tokyo Game Show exhibits the newest titles from Japan and the world alongside a gala of cosplay, presentations, interviews, trailers, game trials, merchandise, and more. The show provides a raw glimpse into the latest gaming trends from leading industry professionals, indie developers, and more. It’s held at the Makuhari Messe Event Hall in Chiba with the first two days being for industry professionals and media only while days three and four are open to the public.

During autumn, many universities across Japan welcome visitors to their campus with lively, fun-filled festivals showcasing school talent and pride. Families, friends, locals, and tourists can enjoy a carnival of performances, music, games, activities, food, and more, all while absorbing the Japanese campus lifestyle. The festivals are largely planned and run by the student body and the dozens of after-school clubs and societies therein, many of which burst with inspiring youthful energy and extraordinary talent. University festivals are generally much larger and more official than high school festivals, with some even requiring tickets for entry, although entrance is always free. Some of the biggest university campus festivals in Japan are held at Keio University, Waseda University, and The University of Tokyo.

There are several Oktoberfest events in Japan making the most of the agreeable weather through outdoor beer and authentic German cuisine. One of the biggest Oktoberfests in Japan is held in Odaiba, Tokyo, which boasts a stellar range of beers and food served by women in traditional German dress. Another popular Oktoberfest is held in the Red Brick Warehouse (Akarenga Soko) in Yokohama, a historical European-inspired building and surprisingly authentic location for such an event. While the above two are held in October, other Oktoberfests in Japan run throughout the year, so you can relish rich German brew even outside of autumn!

Autumn is host to a delightful range of flowers seen both in parks and out in the wilderness. The pinnacle of this is cosmos, which bloom somewhere between September and October depending on the region. Numerous parks in Japan boast huge cosmos flower beds, weaving together a delightful tapestry of pink, white, purple, and more. Other typical autumn flowers include various types of chrysanthemum, platycodon, plumed cockscomb, bush clover, French marigold, dahlia, and many more. The famous red spider lily, often featured in anime, can also be seen during early autumn, generally blooming between late August to early September. Also worth seeing are the fields of “hokigusa” kochia bush, which become bright red during October and November.

One of Asia’s largest celebrations of film, The Tokyo International Film Festival takes place in autumn and showcases a series of new films with guest appearances across Tokyo. Alongside a selection of international cinema, many of the latest Japanese films premiere here, making it an unmissable opportunity for film buffs to get in on the action. There are also screenings of older films alongside restored classics, allowing a new appreciation for the history of Japanese cinema. Best of all, many films will be screened with English subtitles, allowing a rare chance for those who can’t understand the language to enjoy Japanese film on the big screen.

Autumn Is an Amazing Time to Be in Japan!

Complemented by exhilarating weather, autumn is a time to celebrate nature, culture, and food in Japan. If you’re seeking fresh produce, magnificent scenery, and a fantastic range of cultural events, then we recommend spending your next fall amongst the wonders of Japan!