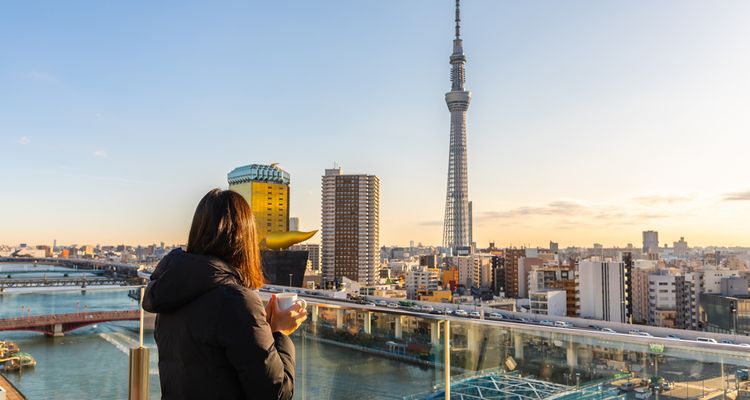 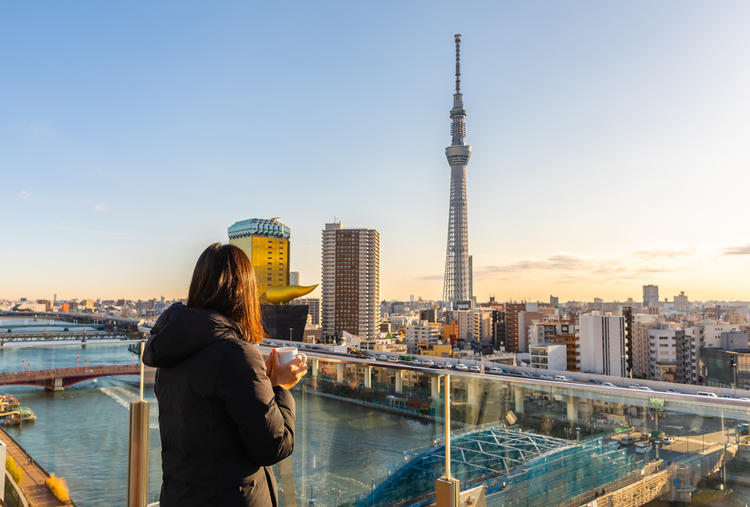 In Asakusa, once the center of culture during the Edo period (1603 - 1867), you can see some traditional structures and sceneries that still remain in the district. There are also a lot of new tourist spots, such as Tokyo Sky Tree, making it a unique place where traditional and modern elements coexist, so you'll find many spots that will look absolutely amazing in pictures. Here are 10 recommended photogenic spots in Asakusa!

When one hears the name “Asakusa," this gigantic paper lantern comes to mind for many people. Kaminari-mon, the front gate of Sensoji Temple, is an extremely popular photo spot for tourists. The paper lantern with a height of 3.9 m and a diameter of 3.3 m is really impressive up close.

It's always crowded as it is a famous spot that a majority of tourists will definitely go to see while they're in Asakusa. If you want to take your time to take good pictures, it is recommended to go there either early in the morning or at night. You can take some especially amazing pictures at night.

Sumida River is a river that runs through the center of Tokyo. There are many bridges built over it, and in the Asakusa area alone, there are 7 bridges. Among all of them, Agatsuma-bashi is the most well-known bridge for taking photos. You can take a picture of three iconic buildings: Tokyo Sky Tree, the glass building of Asahi Breweries’ head office, and the Super Dry Hall adorned with a gold, cloud-shaped fire sculpture on top, all in a single frame.

You can take quality pictures at any time of day, but early morning is especially recommended. The beautiful morning glow and silhouette of Tokyo Sky Tree and the surrounding buildings are definitely worth waking up early for.

The Toronagashi Festival, held in August, is an event where people write their wishes or messages for departed loved ones on lanterns and set them adrift in the river. During this event, you can see and take pictures of a magical spectacle of the many floating lights slowly drifting down the river.

Genmori-bashi is a popular spot among railroad fanatics. It's a small bridge built over a canal drawn from Sumida River, and is known as a place where you can take a picture of Tokyo Sky Tree together with the trains as they pass by.

This is where you can also see the reflection of the tower on the river. It is called the “Reversed Sky Tree,” and you can take some great and unusual pictures when the weather is clear.

This bizarre looking sculpture by the bridge is actually a bench for people to sit on. You can sit here while enjoying the view of Tokyo Sky Tree, but it could also be funny to take a picture of you and a friend in the exact same position next to the sculpture!

Hanayashiki is the oldest amusement park in Japan with a history of over 150 years. The park is filled with retro and colorful attractions, with great spots to take photos everywhere you look.

An illumination event is held for each season. In spring, the park will be illuminated a cherry blossom-colored pink, which gives the park a romantic atmosphere.

Located by the entrace is a flower-pattern mailbox and a small statue of a panda on top. Consider sending postcards to your friends and family using this mailbox. It will make for a good travel memory!

You can go on a cruise on Sumida River with Tokyo Cruise, which will take you from Asakusa to Tsukiji Fish Market and Odaiba.

You can spend a really pleasant time here looking at the ever-changing views from the cruising vessel. You can also see many must-see views that you wouldn't be able to see otherwise, like the bottom of the bridges. They have cruise plans like the sunset cruise or night cruise, where you can enjoy a different atmosphere at your preferred time of day.

While they have a variety of vessels, the futuristic-looking vessels, Hotaluna and Himiko, are especially popular. These vessels have wide windows so that you can easily take pictures from inside.

Located right beside Kaminari-mon, Asakusa Culture Tourist Information Center is a tourism facility that provides information on sightseeing and the history of Asakusa. The 8th floor of this building houses a free observatory terrace from which you can have a sweeping view of the Sensoji Temple and Tokyo Sky Tree area.

The fence on the terrace reaches up to around a person's chest, so it’s easy to take nice pictures here. From above, you’ll be surprised to see just how crowded the pathway to the temple can get.

There is also a cafe by the observatory terrace, so you can enjoy the view with some coffee, juice, or beer. It makes for a nice break with the great view and a nice beverage.

On the west side of Sensoji Temple lies Hoppy Street, a street full of popular pubs that are open from around noon. These pubs have seats outside where you can enjoy the daily atmosphere of Asakusa.

When it gets dark, they light up the lanterns outside, filling the streets with warm light. Here, you'll be able to capture the atmospheric, traditional vibes of Asakusa with your camera!

Make sure to grab some food and drinks while you're at it! There are a lot of friendly locals and employees at these shops, so even though they may not speak English, you can still have a lot of fun socializing.

Shin-Nakamise Shopping Street is the biggest shopping street in Asakusa, where you can even see Tokyo Sky Tree through the open roof of the street. The view here combines the modern and nostalgic vibes of this old street, making it a unique photo spot.

The streets are filled with a wide variety of shops and stores such as restaurants, cafesƒ, boutiques, and pharmacies. You can enjoy shopping while looking for some interesting items to bring home, as there are Japanese umbrella stores and even kimono tailors here.

There is a great spot for taking pictures that is slightly set apart from the central street. At night, you can take a unique picture of Tokyo Sky Tree that looks as though the tower is built on top of the character "shin" (新), which means "new" in Japanese.

This 200 m-long street in the southern part of Sensoji Temple is called Dempoin-dori, a street which recreates the traditional street of Edo (the old name for Tokyo up until the 19th century). It has a lot of shops, such as Edo-Kiriko, which deals with Tokyo's traditional faceted glass products, and shops that sell traditional snacks called dango (sweet dumplings made of rice flour). You can enjoy taking some great pictures here while shopping and grabbing some snacks.

Surrounded by wooden houses and signs, this street will make you feel as though you've gone back in time. You'll want to wander around the streets in a kimono, or even on a rickshaw.

At night, the street looks have an even more traditional Japanese feel! You can’t go shopping since the stores will be closed, but it's fun to just walk around looking at the paintings on the shutters of the stores.

In Japan, there is cat ornament called maneki-neko (beckoning cat) that is believed to bring good fortune. Imado Shrine is said to be the origin of this cat ornament; the statues can be spotted all over the place, making it an ideal photo spot for cat lovers.

There are cats drawn on the shrine's ema, wooden placques on which people write their wishes. In most shrines, the ema is shaped like a pentagon, but in this shrine they are round. Go ahead and make a wish by writing it on the ema, then tie your ema to the board.

If you’re lucky, you could run into some actual cats at the shrine. Watching these cats relax without a care in the world will soothe your soul.

Asakusa is a city full of photogenic spots, but the places mentioned in this article are especially noteworthy. Take some amazing pictures of your trip home with you, and share your great memories with friends and family!