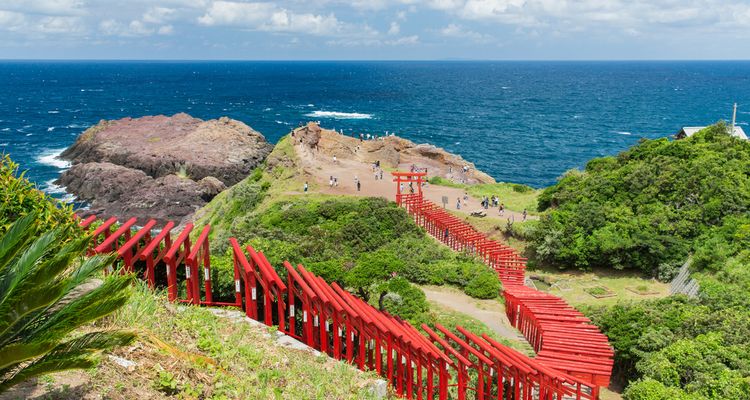 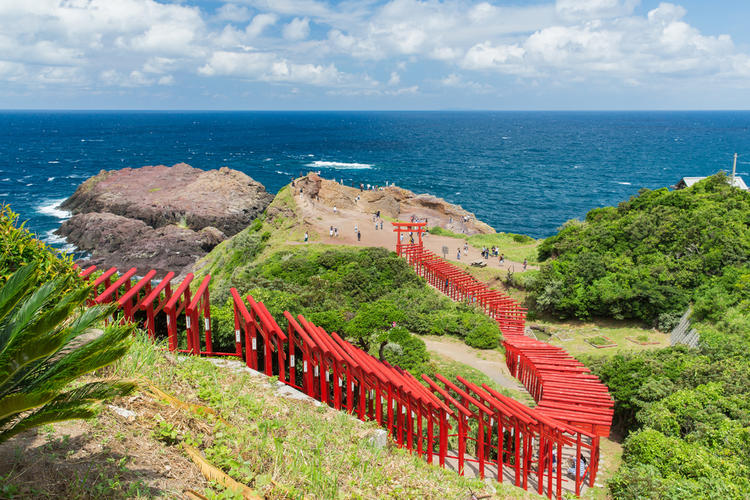 10 Most Mystical and Picturesque Power Spots in Japan, as Chosen by 1,000 Japanese Travelers

When traveling to Japan, many people hope to visit “somewhere picturesque that feels quintessentially Japanese.” For these people, we’d like to recommend a visit to one of Japan’s many power spots, which are absolutely beautiful and are where prayers are answered. In recent years, it’s become more and more popular for people to go on “power spot pilgrimages” to pray for a fulfilled love life or to find that special someone. Power spots are deeply mystical and bring all sorts of good fortune, but in this article, we’ll be introducing the top 10 spots which also boast the best, most magnificent scenery, as chosen by 1,000 Japanese travelers. These “picturesque power spots” offer something different depending on the season or even time of day, so please use this guide to plan your own power spot pilgrimage during your next visit to Japan.

The Futami Okitama Shrine is deeply connected with the Sarutahiko Okami deity from Japanese mythology. The shrine approach faces the coast as well as the famous Meoto Iwa (Married Couple Rocks): two rocky stacks, a big one and a small one, connected by a ceremonial "shimenawa" straw rope. As the name of the rocks suggests, this power spot is for people praying for their family’s well-being or marital bliss.

Atop the larger of the Married Couple Rocks sits a small torii gate, positioned for the worship of both the "Okitama Shinseki," a shallow rock 700 meters further offshore where Sarutahiko Okami is said to reside and Amaterasu (one of the central figures in Japanese mythology). Since ancient times, locals have worshipped the sun rising between the two rocks as an avatar of Amaterasu as she is the deity of the sun. You can only witness such a sight here between May and September, but once you do, you will feel like you’ve been blessed by a divine power.

The Arakura Fuji Sengen Shrine deifies Princess Konohanasakuya, who served as the model for Princess Kaguya in “The Tale of the Bamboo Cutter,” a folklore story based on Japanese mythology which dates back to the Heian period (794 – 1185). As expected from a shrine linked to a story primarily about love and marriage, people come to Arakura Fuji Sengen to pray for being delivered from evil, safe childbirth, and family harmony, etc.

In the past, Arakura Fuji Sengen was a small village shrine venerating a local guardian deity. However, after World War II, the shrine grounds became the Arakurayama Sengen Park, and in 1962, the five-storied Chureito Pagoda, dedicated to the war dead, was built inside it.

A hill in the park is celebrated for providing “the best view of Mt. Fuji in Japan,” and together with the Chureito Pagoda, they create one of the most quintessentially “Japanese” scenes in the country. No wonder then, that it has been featured on the cover of the Michelin Green Guide Japan. For a power spot pilgrimage that you won’t soon forget, you cannot miss the beauty of Mt. Fuji at the Arakura Fuji Sengen Shrine.

Known as the oldest shrine in the Izu area, the Shirahama Shrine boasts a 2,400-year history. Its official name is the Ikonahime-no-Mikoto Shrine, and it’s located near Shirahama Beach, which is visited by 300,000 people a year.

The shrine’s main deity is Ikonahime-no-Mikoto, the deity of love, wisdom, and beauty, although it also venerates Mishima Daimyojin, the deity of business and fisheries, as well as three other deities. Shirahama is primarily known as a power spot for those seeking love and marriage, and on the weekends, you will find many women gathered at the shrine. The shrine grounds are also home to a gigantic juniper tree, estimated to be over 2,000 years old. A prefectural designated natural monument, the tree itself is also a power spot said to extend one's life.

The Oarai Isosaki Shrine is a famous power spot in the Kanto region. Its main hall was constructed over 1,100 years ago and has been designated as an important cultural property of Ibaraki Prefecture. The shrine’s main deity is Onamuchi-no-Mikoto, though the deity Sukunahikona is also worshiped here. Oarai Isosaki is known as a spot where all sorts of blessings can be received at once, but it is most famous for its matchmaking blessings.

Located in the city of Nagato, Yamaguchi Prefecture, the Motonosumi Inari Shrine is one of the shrines venerating Inari, the deity of rice farming and agriculture. There are more than 30,000 Inari shrines in Japan, making it one of the most popular shrine types in the entire country.

Apart from its main blessings of granting one’s deepest desires and business prosperity, Motonosumi Inari Shrine is highly regarded for its mystical scenery. Specifically, the 123 torii gates stretching for 100 meters up to the main grand torii is spectacular. The contrast between the cobalt-blue sea, vermillion gates, and lush green landscape creates one-of-a-kind scenery that you won’t find anywhere else.

In 2015, CNN chose Motonosumi Inari as one of The 31 Most Beautiful Places in Japan, and to this day, it remains a popular power spot attracting many foreign travelers.

The Shirahige Shrine overlooks Lake Biwa, the largest lake in Japan. Its primary deity is Sarutahiko Okami, and the shrine is a known power spot where people pray for love and their family’s well-being. Shirahige is the oldest shrine in the Kinki region, having been built over 2,000 years ago. It takes its name (Shirahige, meaning “white beard”) from the white facial hair of Sarutahiko Okami.

One of the most famous parts of Shirahige is the Kochu Otorii gate in Lake Biwa. According to local lore, it appeared out of nowhere as a sign of an impending cataclysm, and since then the area around the gate has been considered holy by the locals. After you’re done praying at the shrine’s main hall, make sure not to miss the Kochu Otorii gate floating above the waters of Lake Biwa.

The Miyajidake Shrine is the most prominent power spot in the Kyushu region, visited every year by over two million people. Its history is ancient, going back 1,600 years to the time when it was constructed as a place of worship for three deities. The shrine primarily venerates Jingukogo, the “undefeatable female deity of good luck,” so naturally a lot of visitors to the shrine pray for all kinds of victories, as well as for granting their deepest desires, business prosperity, and bountiful harvests.

Miyajidake Shrine houses a massive "shimenawa" straw rope in its main hall. Measuring 13 meters (42 feet) in length, 2.5 meters (8 feet) in diameter, and 5 metric tons (11,023 pounds) in weight. A team of volunteers reweaves the rope by hand once every three years. This giant shimenawa is what the shrine is most well-known for, along with its 8 foot-diameter taiko drum and giant bell located in front of the shrine gate. Be sure to take a picture with these items so that they can bestow you with their great power.

Hakone-Yumoto in Kanagawa Prefecture is a popular day-trip destination among Tokyoites because of the area’s abundant nature and hot springs. It’s also where you’ll find the Hakone Shrine, a place that even the imperial family is known to visit. Constructed over 1,300 years ago, it has been venerated and thought to provide protection for the entire Kanto region. There are rumors that some of the greatest people in Japanese history have worshipped here, from Tokugawa Ieyasu who founded the Tokugawa shogunate to generals of the Sengoku period (1467 – 1603).

Hakone Shrine’s main deity is Ninigi-no-Mikoto, and it also venerates his wife, Princess Konohanasakuya, and Hikohohodemi-no-Mikoto, the great-grandchild of Amaterasu. Together, the three are regarded as the Three Great Deities of Hakone, and they’re known for bestowing such blessings as victory in battle and the granting one’s wishes. In the vicinity of the shrine you’ll find Lake Ashi, surrounded by the splendor of nature, as well as magnificent views of Mt. Fuji. The area is quite mountainous and attracts many worshippers who also want to do a bit of hiking, but lately the area has also become popular as an Instagram spot, with tourists forming massive lines to take a photo at the torii gate. The lines can sometimes take as long as two hours to get through, so make sure to visit the Hakone Shrine on a weekday and plan your itinerary carefully.

The Takaya Shrine is located on Mt. Inazumi in Kanonji, Kagawa Prefecture, with the main building sitting at an elevation of 404 meters. To get there, worshippers have to climb 270 steep stone steps, but once they reach the top, they’ll be rewarded with a panoramic view of the Seto Inland Sea as well as the giant Tengu Torii gate. The views from the main shrine are simply beautiful and went viral on Japanese social media in 2019.

The Takaya Shrine venerates Ninigi-no-Mikoto, grandson of Amaterasu, as well as Princess Konohana-no-Sakuya and Ukemochi, known as the goddess of food. Since the shrine overlooks the sea, it has long been known for answering prayers for safety at sea and protection from drowning. The shrine isn’t just a power spot, it’s also a popular place to take one-of-a-kind pictures.

The number one Japanese power spot that you cannot miss is the Fushimi Inari Taisha shrine in the city of Kyoto. It is the main shrine out of the 30,000 shrines that venerate the deity Inari. Composed of a solemn main building and subsidiary shrines, Fushimi Inari Taisha is known as a place to pray for bountiful harvests and business prosperity. The Senbon Torii corridor that stretches from the main hall to the inner shrine creates a magnificent sight that has helped make this place the most famous shrine in all of Japan. Including the 1,000 torii in the famous corridor, there are somewhere around 10,000 gates in total at Fushimi Inari Taisha.

The vermillion color of the torii gates is known as “Inari-nuri” and it is said to protect against evil powers. The shrine also claims that the color holds within it the power of life, the power of the land, and the power of creation, so passing through the gates is like passing one’s wishes through it, resulting in them coming true. The torii gates at the shrine are actually offerings from people whose prayers were granted, and the number of gates has steadily increased over time to more than 10,000. The location has a long history as a place of devoted worship, which is why it’s said even the grandest wishes come true here.