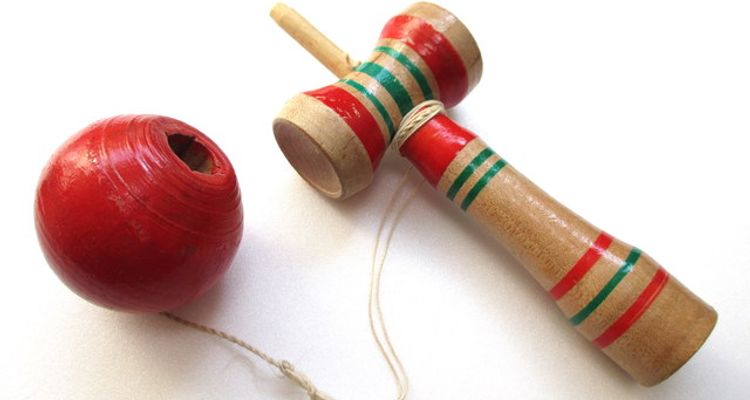 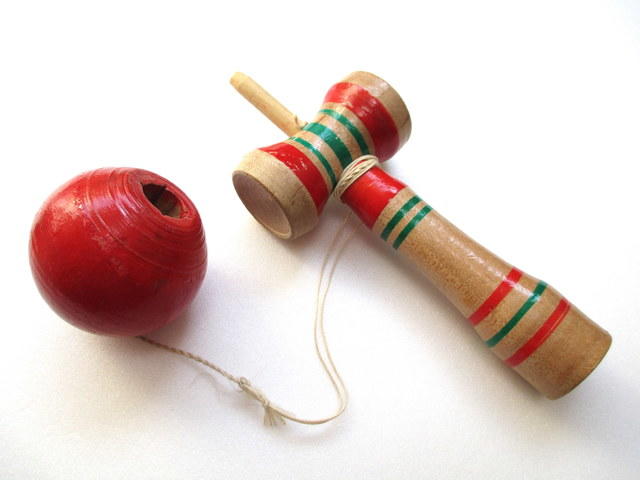 What is the kendama, the Japanese toy that is now trendy worldwide?

Sometimes two cultures merge and give a birth to something new. See how a Japanese traditional kids' play turned into an internationally popular street performance!

Kendama is a traditional Japanese toy. Almost all Japanese people know what it is, and some of them have played it once or twice when they were kids. But not many grown-ups continued playing the game as a hobby, and the wooden toy was known more as a traditional folk craft and a good souvenir…until several years ago. How do you play with it?

This is a traditional kendama and the name of each part. The game is basically played by tossing the ball and attempting to catch it in one of the cups or to spear it with the point of the stick.
web-japan.org

Although a player holds the Kendama with his or her hand, it is a game that uses one’s whole body, mind, and spirit to perform a variety of fun and entertaining waza (techniques）while at the same time helping develop the player’s sense of balance and concentration.
kendama.or.jp

History of kendama before 2006

Kendama was first introduced to Japan in the Edo period (1603-1868) and was enjoyed by adults.

While it may have entered the country around the middle of the Edo period in around 1777 or 1778, the exact date is uncertain. At the time, kendama was apparently enjoyed by adults as a sort of drinking game. A player who made a mistake was forced to drink more.
web-japan.org In Meiji (1868-1912) and Taisho (1912-26) eras, kendama became popular among children. The kendama they used in the Taisho era, called "Nichi-getsu (sun-and moon) ball," was almost the same type as today's popular models. In 1975, an association was founded to set the rules and make the game suitable for competitions. The details are described on this site: web-japan.org

In 2006, some American tourists saw kendama for the first time in Japan. The encounter added a new chapter to the history of kendama.

The KendamaUSA staff was first introduced to Kendama in 2006 while touring in Japan. Our good friends were always playing while we waited at train stations, bus stops, and while walking around the cities. We got our first Kendama in Downtown Tokyo, and showed all of our friends when we got back home. … Everybody’s curiosity and enthusiasm inspired us to start KendamaUSA and help introduce people from all over the world to this great skill toy.
kendamausa.com In 2006 KendamaUSA and the British Kendama Association were founded [6][7] and began to promote kendama in North America and Europe, particularly throughout the juggling and rollerblading communities. As players worldwide began to put videos online, kendama continued to grow and has branched out forming its own global community.

The fascinating performance shared on YouTube introduced kendama to the world as a cool street performance.

Now kendama comes in many different colors and designs. This Westernized style of kendama was “reimported” into Japan and rapidly increased the number of kendama enthusiasts there.

But actually, it went further than that.

What does the kendama fad have to do with the 3.11 earthqake?

The world still remembers the 3.11 Earthquake that hit Japan in March 2011. The hard-hit areas are still struggling to recover from the damage caused by the massive natural disaster. Numerous efforts have been made to help revitalize the local economy. And kendama came to play a unique role there! At B:MING LIFE STORE, we have collaborated with five top creators from different industries and manufacturers from around Tohoku to design expertly crafted kendama and accessories. We named the project "KENDAMA TOHOKU." Through this project we hope to raise funds to support the ongoing reconstruction of the areas affected by the Great East Japan earthquake.

And these are the unique collaborations. The project has created jobs in the disaster-affected areas. Now those who lost their jobs because of the earthquake are making the special Tohoku kendama products and making some income, which helps them regain the sense of control in their lives after the disaster.

Japanese kendama fans, including the members of the Japan Kendama Association, have long dreamed of seeing kendama being popular worldwide. Now they are witnessing their dreams come true.