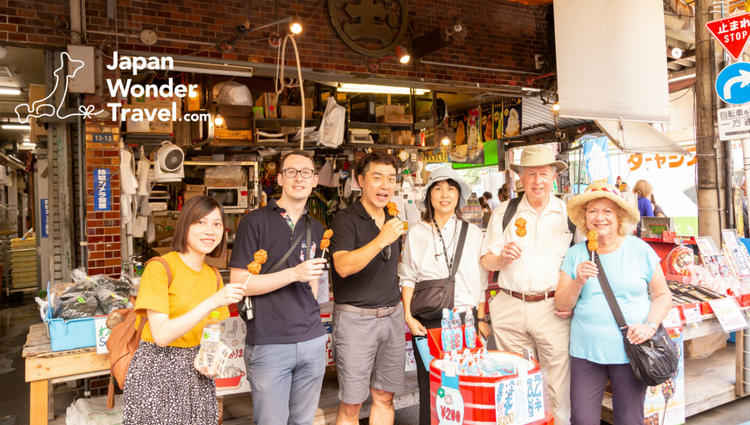 While the main wholesale market area of Tsukiji may have moved to Toyosu in 2018, the Tsukiji outer market area still remains intact and is a veritable wonderland of delicious foods to sample as you walk around. One of the best ways to experience the best of Tsukiji in an efficient manner is with an expert tour guide who can take you straight to all the best spots, as well as answer all the questions you might have about Japanese culture, history, and cuisine. Keep reading to find out all about our experience with Japan Wonder Travel's Tsukiji Market FooDrink Tour so you can see if you want to book a tour for yourself!

Established in Tokyo in 1935, Tsukiji Fish Market (also known as the Tsukiji Wholesale Food Market) was the largest wholesale seafood market in the world in terms of daily transactions and a popular tourist destination within the Japanese capital for over a half-century. It was separated into two main areas: the inner market, where the popular tuna auctions and other wholesale activities took place; and the outer market, a mixture of restaurants and shops selling fresh seafood and produce, prepared foods, and souvenirs.

In October of 2018, the inner market area was closed and all wholesale operations, including the tuna auctions, moved to a newly built market in Toyosu, Tokyo. However, the Tsukiji outer market remains intact and still draws in crowds of hungry and curious visitors each day to sample the wide variety of gourmet delights, as well souvenirs, on offer.

Japan Wonder Travel is a tour company that offers food and cultural tours in Tokyo, Kyoto, and other areas around Japan. On their tours, you'll be guaranteed an exciting and educational time with a knowledgeable and friendly English-speaking guide. While exploring around new cities without a guide or a plan can be fun at times, sometimes it's better and more efficient to leave the route to the experts like those at Japan Wonder Travel, especially when you only get to spend a limited amount of time at your travel destination.

We decided to give their "Tsukiji Fish Market FooDrink Tour" a try. Keep reading to see how it went and to learn how to book a delicious and fun tour of your own.

Meet Up at Tsukiji Hongwanji Temple

The tour starts outside of Tsukiji Hongwanji Temple, a Buddhist temple that was constructed from 1931 - 1934 as the replacement for the former Tsukiji Gobo Temple, which was lost in the Great Kanto Earthquake of 1923. We appreciated this location as the starting point of the tour due to its close proximity to Tsukiji Station, and the temple itself was quite large and easy to spot.

We met up with Tomo, who was our tour guide for the day. She gave us some handy cards with the day's menu and some useful phrases and warnings written on them.

Since we were already at Tsukiji Hongwanji Temple, we made a short stop inside the temple before heading to Tsukiji Market for the main part of the tour. Tsukiji Hongwanji Temple stands out from the majority of temples in Japan for having a distinctly Indian-inspired design, whereas most temples in Japan were built in the Chinese style. Once you step inside, you will see even more signs of foreign influences, such as a large pipe organ installed in the main chamber.

Enter the Market and Start Exploring

The entrance to the Tsukiji outer market is a few minutes from Hongwanji Temple by foot. Even in the early morning, the market bustles with the lively commotion of local chefs picking up ingredients and supplies for their restaurants and tourists who have come to sample the delicacies. In fact, the best time to visit this market is from the morning to the early afternoon, and you will find that many of the shops and eateries will already be closed by 3:00 pm.

Tomo explained the history of the outer market, which started out as a collection of restaurants and shops whose clientele consisted mainly of workers from the inner market who would step out for a meal. Eventually, the market became a tourist destination in its own right, and in addition to more and more shops and restaurants opening up, some of the pre-existing shops started to alter their wares to appeal to a more diverse set of customers.

Even if you don't eat or purchase anything, it can be fascinating to just walk around and see all the fresh seafood, produce, and other items on display. No matter where you come from, there will probably be a large number of interesting food items that you won't find in your home country. For example, in the picture above on the left-hand side, you can see a huge batch of fresh wasabi, something that is hard to find outside of Japan.

Try Out Some Japanese Delicacies

It wasn't long after entering the market that we started to sample and taste a variety of the foods available in the market, including some that weren't printed on our menu card. At one shop, we got to taste and compare some dried and boiled black beans, which were served to us by an incredibly friendly and generous clerk.

The dried beans tasted almost like peanuts, but the boiled beans were sweet and soft! It was amazing to think that they were the same ingredient, just prepared in different ways.

Next, we got our hands on some fried fish cakes. This delicacy consists of ground fish paste that is seasoned and filled with chunks of other seafood, such as squid. The paste is formed into patties, fried, and then heated up on a grill just before eating. It's a delicious meld of sweet, salty, and savory flavors that can't be missed!

We also got to go inside a Japanese omelet specialty shop to see how their operation works. There, they make tamagoyaki (Japanese rolled omelets) with an ingenious combination of machine and manpower, as a row of skilled cooks take turns flipping each of the large rolled omelets as they travel down a heated conveyer belt in rectangular pans.

The result is a bright yellow block of fluffy and slightly sweet Japanese omelet, still warm from the pan! The sweet mirin and savory stock used in the omelet combine perfectly with the egg to create this popular Japanese dish, which can be found even overseas as a topping for sushi. One bite and you'll understand why it is considered one of the top must-eat delights of Tsukiji Market.

Next, we got to taste some katsuodashi, which is a broth made with shaved, dried bonito (slipjack tuna). Katsuodashi is one of the core ingredients in Japanese cooking, and can be found in everything from miso soup and Japanese hotpot to the batter for okonomiyaki (savory pancakes). While it is generally used as an ingredient in other dishes, it was still delicious and satisfying when enjoyed on its own. We also go to sip some high-quality Japanese green tea (pictured above), served cold. Japanese green tea is known throughout the world for its refreshing, grassy flavors as well as its numerous health benefits.

As we walked around the market, we continued to sample more treats, such as various types of tsukudani (small pieces of seafood, meat, or seaweed simmered in a sweet-and-salty mixture of mirin and soy sauce). We probably could have spent several more hours just walking around the maze-like outer market area, but we headed to the Tsukiji Uogashi building for the next part of the tour.

Watch Some Tuna Slicing in Action

Tsukiji Uogashi is a new complex that opened up in October 2018 to make up for some of the intermediate wholesale facilities that moved to Toyosu. It houses around 60 individual intermediate wholesale shops, and is the best place within the outer market area to get your hands on fresh seafood that has been shipped from Toyosu Market at the early hours of the morning.

So, even though you can't watch the tuna auctions in Tsukiji anymore, you can still get your hands on some supremely fresh tuna that was caught on the same morning it's served to you. The process of cutting a large piece of tuna or other fish for sashimi or sushi can be fascinating, and this tour includes front-row access to watching a master at work.

Just like with beef, there are many different types of meat within tuna, each with its own flavor, texture, and fat content. The piece of tuna you see above actually contains two distinct cuts: akami (lean meat), which is a deep red color, and chu-toro (medium fatty meat), which is a lighter, pinkish color.

We were given a take-out box of freshly cut tuna to try. The box contained a row of lighter-colored chu-toro, as you can see in the forefront, and a row of darker red-colored akami in the back. It was fun to taste each type one after the other to see which one we liked better. Some preferred the chu-toro for its decadent, almost buttery flavor, while others preferred the akami for its firmer texture and strong umami. This much fresh tuna on its own would usually cost quite a lot, so it was a real bargain to be able to enjoy it along with all the other foods on this tour.

After filling our bellies with tuna, we ventured back into the main market area and towards the final destination of our tour. On our way over, we stopped to sample some sake (Japanese rice wine) at a specialty shop.

We tasted some Gonin-musume Junmai Sake in these traditional wooden sake cups. The sake had a crisp and fruity flavor that paired amazingly well with the fresh tuna flavors still lingering on our palates.

As is customary in Japan, we brought our glasses together with a "Kampai!" toast to celebrate our time together.

From sake to green tea, fruits, and other delicacies, there is a host of things to enjoy and explore in Tsukiji Market beyond just seafood! When you visit, try to taste, sip, and nibble as much as you can to make the most of this lively, multifaceted market. And of course, after the tour is over you can return to your favorite places to make purchases.

Finish Up with Authentic Sushi

The tour wraps up at a small standing-type sushi bar with supremely fresh sushi sold at reasonable prices. Everyone who takes part in the tour is served a 7-piece sushi set (exclusive to tour participants) that contains a good variety of types to sample and enjoy.

The highlight of this sushi set was the aburi salmon, fresh salmon seared with a blowtorch right before our eyes! Other pieces included cooked shrimp, squid, red snapper, raw salmon, and two types of gunkanmaki (sushi wrapped with seaweed). Note that the sushi restaurant that you visit depends on the conditions and schedule that day, so the sushi that you receive on your tour may differ from what is shown above.

It was an excellent end to this tour, as savoring this Japanese delicacy which showcases fresh seafood really lets you understand why the Tsukiji Fish Market was such an important part of the Japanese culinary scene for so long.

1. On the tour page, select the number of participants, the tour date, and the type of tour you wish to join
2. Click "BOOK NOW"
3. On the shopping cart page, enter "tj2019" into the coupon code text field and the discount will be applied to the tour price!