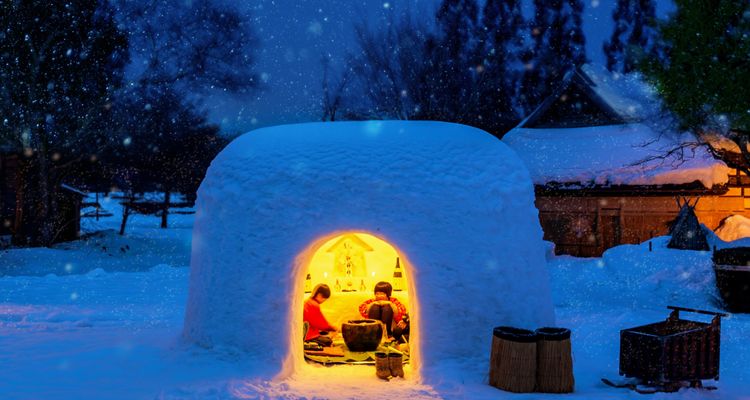 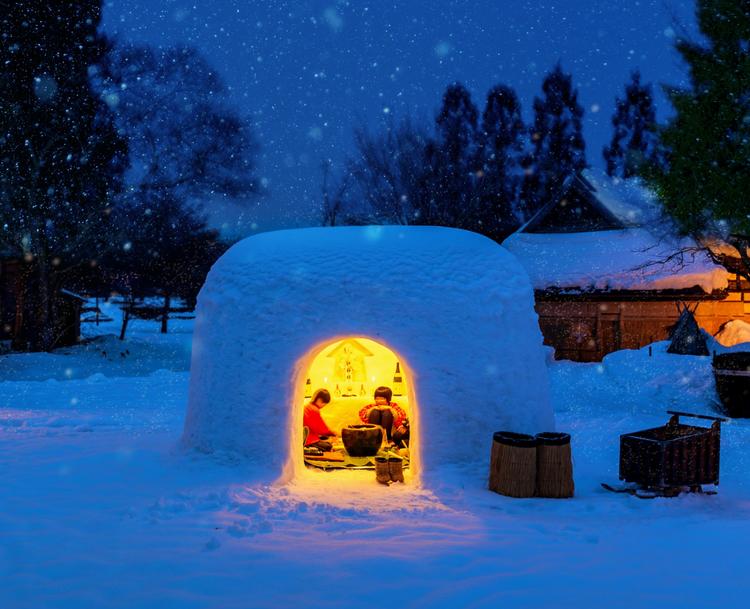 You do not have to go to the Arctic to try sitting in an igloo, because a festival in Yokote will satisfy your curiosity.

Ever wonder what is it like to stay warm in an igloo? Well, you do not need to travel all the way to the Arctic to find out! Make your move to a Yokote, a city located in the southeastern portion of Akita prefecture, where an igloo-like snow house festival is held every February. Known as Yokote no Yuki Matsuri or Yokote Kamakura Festival, you will find more than 100 igloo-like snow houses built in various locations in the city. The festival is held on every year on the 15th and 16th of February. This 400 year old festival is said to have its origins in the traditional event of returning New Year decorations to the gods by burning them, and also in the custom of children chasing away birds damaging crops.
www.jnto.go.jp

The snow houses known as “kamakura” are made by carving out a mound of snow where it can fit a few people. Most of these kamakura are built and managed by children and teenagers. Inside the kamakura, a snow altar is carved on the wall, dedicated to the water gods. Visitors and the locals will pray to the water deities to bless the harvest in the coming spring by giving a lot of rainfalls. Agriculture is a strong industry in Akita prefecture, with many residents working as rice farmers.

Passers-by are invited by the children, in Akita dialect, to come inside the kamakura and drink some sweet fermented rice brew. Everyone has a good time chatting while eating rice cakes and sweets, which is the conventional way of spending time in kamakura.

They hope that by inviting a stranger into these small temporary houses and offering them a piece of toasted mochi rice cake, and some warmed amakaze sweet rice wine, that the water spirits will reward them with plentiful rains in the spring for the new rice harvest.

In return, the visitors will make some offerings to the water deity, praying for good harvest in the region. Besides the big kamakura, you can also spot many miniature kamakura around the city. Along Yokote River, hundreds of small kamakura the size of lanterns are made. These mini kamakura are illuminated by candles from dusk until around 21:00 and create a lovely sea of lights. At the grounds of the Minami Elementary School, more mini kamakura and some snow sculptures are displayed in front of the nice school building. Children can enjoy playing with snow and riding on a snow slide.

The festival area extends east of Yokote Station to Yokote Castle, which is located about two kilometers away across Yokote River. Starting from the station, visitors can enjoy a leisurely stroll along the streets of the town and appreciate scenes of kamakura built beside houses in the neighborhood. It is also possible to take part in kamakura making at one of the hands-on sessions at Komyoji Park.