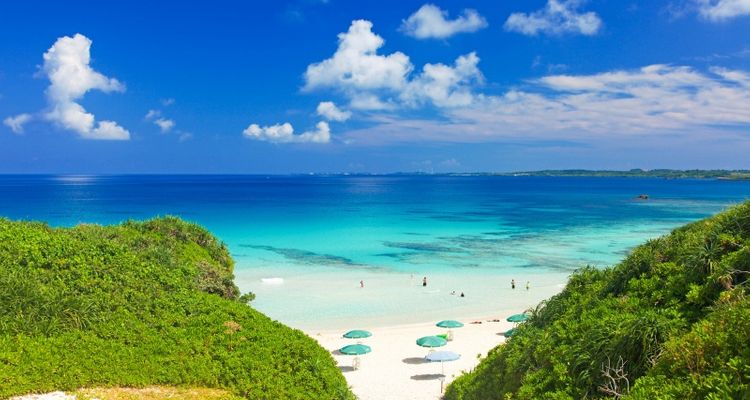 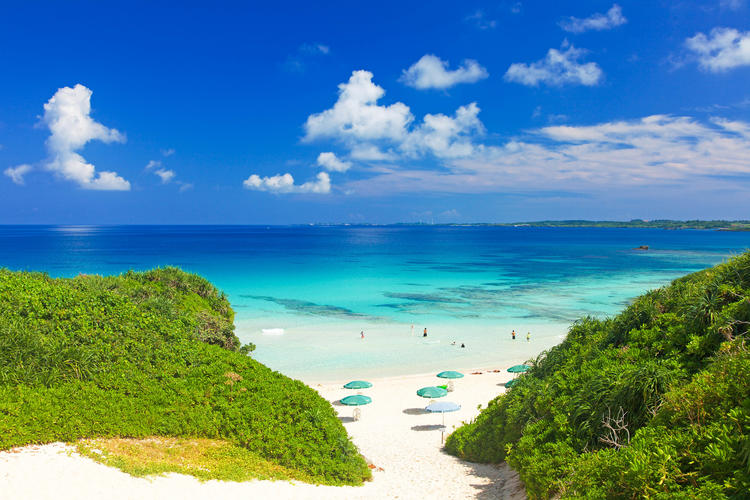 Located in the southwest of the Japanese archipelago, Okinawa is famous for its beautiful, crystal-clear waters and white sandy beaches that are perfect for swimming and sunbathing. Thanks to its year-long mild climate, you can enjoy Okinawa’s seaside from April all up until October, and with so many resorts in the area, many tourists do just that. In this article, we’ll discuss the 12 best beaches to visit in Okinawa, from famous locations to secret paradises known only to the locals.

Why Are Okinawan Beaches so Popular?

Okinawa Prefecture is located in the southwest of Japan between Kyushu and Taiwan. Its average yearly temperature is 23.3℃, which has helped make it a popular resort destination. But what many people really come to Okinawa for are its white sandy beaches and crystal-clear waters! The islands’ beach season differs depending on the area, but can start as early as April and last all the way until October, though early July to late August is usually when it peaks. No other place in Japan can boast a beach season that long. However, outside July and August when temperatures are in the 30℃ range, the 21〜25℃ weather that you can expect in April-May or October might be a tad too chilly for a swim in the ocean for some. Also, September is usually the start of jellyfish season in Okinawa. Some places do use anti-jellyfish nets to protect their beaches while everyone else simply issues jellyfish warnings, letting you know when it’s safe to get back in the water.

Yonaha Beach is famous for its white, powdery sand that’s unlike anything you’ve ever seen. The 7-kilometer-long stretch of white contrasts beautifully with the cobalt blue sea, creating a spectacular landscape. The beach is actually quite empty in the morning and the evening, which are the perfect times to take a stroll down Yonaha while admiring the scenery. You can also take a pleasant drive down the 1,690-meter-long Kurima Bridge that connects Yonaha Beach to Kurima Island. The bridge has a footpath as well if you feel like walking.

Taketomi is one of the most popular remote islands in the Ishigaki area. On the west side of the island, you’ll find the famous Kondoi Beach, known for its shallow waters and gentle waves, which is why it’s especially recommended for families with small children. During low tide, a stroll down Kondoi Beach feels like walking on water.

Sesoko Beach is popular with tourists and locals alike because it offers easy access by car from Okinawa's main island. Located just a 15-minute ride from Okinawa Churaumi Aquarium, the beach is located on a small remote island called Sesoko Island. The natural beach is suited to snorkeling and diving and offers the chance to swim with schools of colorful, subtropical fish.

Nishihama Beach is located on Hateruma Island, Japan’s southernmost inhabited island, and is known for its fine white sands and a sea that turns various beautiful shades of blue throughout the day (which has earned it the nickname “Hateruma Blue”). Since the color of the sea keeps changing, you can get something new out of Nishihama by visiting it at different times.

Minna Island is located just a 15-minute boat ride from Motobu-cho in the northern part of the main island of Okinawa. After that, it’s just a 1 minute walk from the port to the beach. Minna Beach is known for its crystal-clear waters occupied by corals and small subtropical fish that visitors can get close to in the swimming zone. You don’t need to dive deep to get to them. Instead, relax and allow Mina Beach to bring you closer to nature.

The 1,960-meter-long Kouri Ohashi bridge, which looks like it’s floating on water, connects the village of Nakijin (Kouri Island) with the city of Nago (Yagaji Island). After crossing it, you’ll arrive at Kouri Beach, which stretches on both sides of the foot of the bridge. It is picturesque, but it’s also known for being perfect for people who don’t normally like swimming in the sea. Plus, the drive there is very pleasant. There are also many chic cafes in the area.

Since Araha Beach is located near the popular tourist spot of Okinawa’s American Village, it’s perfect for people who want to do a little shopping as they sightsee or go for a swim. The waters at Araha Beach are very shallow and there’s even a park nearby with a play structure in the shape of a large ship. A barbecuing area is also available, so you can do a little cooking in between swimming.

Furuzamami Beach is the main beach on Furuzamami Island, which a famous French guidebook awarded 2 stars. Whenever the waves hit it, you can see the vast coral reefs stretching underneath the waters. You can admire them, as well as schools of colorful subtropical fish, while snorkeling or diving. Furuzamami Beach is also where sea turtles lay their eggs, so if you’re lucky, you might get to swim with a turtle.

Off the coast of Kume Island you’ll find Hate-no-Hama, a 7-kilometer-long island composed entirely of coral sand. Surrounded at all sides by an emerald green sea, it’s an otherworldly sight full of subtropical fish, which you can see up close while snorkeling.

Located 4 km from the urban area of Hirara in the city of Miyakojima, Sunayama Beach offers amazing views of Miyako Island. You can also see many natural formations in the area like arch-shaped rocks created by wave erosion. Sunayama is covered in lush greenery seemingly straight out of a tropical jungle, and you can even admire the islands of Irabu and Ikema from the beach.

Stretching for 800 m, Aharen is the largest beach of the entire Kerama archipelago. It’s known for its white sands and gentle waters on account of being located in a calm bay. On the west side of the beach, there is a rock tunnel that frequently appears in social media. It’s one of the many reasons why so many people take day trips to Aharen Beach.

It only takes about 15 minutes to reach Aharen from Tokashiki Port via bus, car, or taxi.

This private beach, known for its fine, white sands, stretches for 1 km and overlooks water that gets the highest annual water quality rating from the Ministry of the Environment. The beach is managed by Okuma Private Beach & Resort, who offer many exciting marine activities in the area like snorkeling or diving.

Okinawa is full of white beaches overlooking beautiful blue waters. There are secluded private beaches, beaches conveniently located close to popular tourist spots, beaches that offer fun snorkeling experiences, and many more. Find one that’s right for you and prepare to have the time of your life.