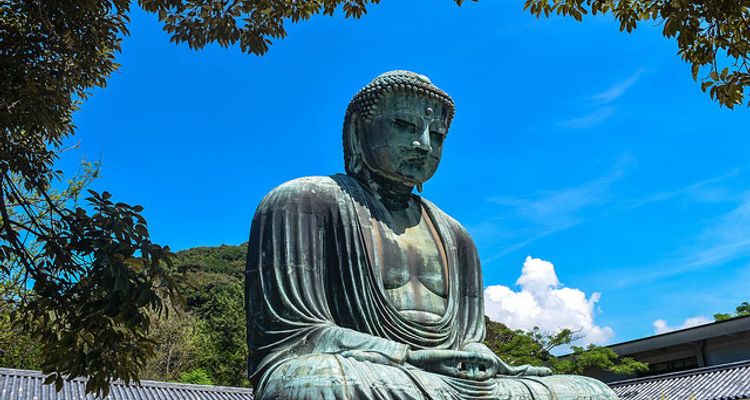 Top 50 Things to Do in the Shonan/Kamakura Area

The Shonan/Kamakura area is less than 1 hour away from Tokyo. You can enjoy visiting historical temples and the ocean, experiences that a city like Tokyo can't easily offer.

1.  Take a picture at the railroad crossing in front of Kamakura High School

The Kamakura Ko-ko-mae Station on the Enoden Line,  a station right in front of Kamakura High School, has become very famous, thanks to the popular basketball anime "Slam Dunk".  You can enjoy the views of the Enoden line railroad crossing as well as the ocean in front of the high school. Both views can be seen from the top of the nearby hill and are perfect photo spots.  This station was selected as one of the best 100 railway stations in eastern Japan in 1997. Shonan Kaigan Beach spreads from Kamakura and Fujisawa up to Chigasaki.  You can enjoy watching surfers in action with the view of Enoshima Island behind them.   In the early evening on a fair-weather day, you can enjoy the marvelous view of the ocean, Enoshima, Mt. Fuji, and the sunset! During the summer, the beach is filled with beach-goers and many sea houses will be assembled to provide food and rest areas for guests to relax.

3. Play with cats in Enoshima It is said that there are over 1,000 cats living in Enoshima Island.  You can meet cats in various places such as Enoshima Shrine and Shoutenjima Park.  They are more likely to be found on cooler days and in early evenings. Please note that feeding cats is prohibited in Enoshima. However, there are fund-raising boxes around the island to help support the locals care for street cats. Enoshima Aquarium stands right in front of Sea of Enoshima. The recommended attraction is the Sagami Bay Mega Fishtank in which a large school of about 8,000 Japanese pilchards swim making a huge wave. You'll definitely lose track of time sitting in front of the fishtank. The Jellyfish Fantasy Hall is another aquarium that will make you feel relaxed as you watch the jellyfish floating through the water. They also have dolphin and sea lion shows you don't wanna miss!

5. Visit the Great Buddha of Kamakura at Kotokuin Temple Kotokuin Temple is a Buddhist temple of the Jodo sect founded by Saint Honen.  The Great Buddha is a bronze seated statue of Amid Nyorai and is a national treasure. It's about 11.3m high and weighs about 121 tons. The Great Buddha was put into place here in 1252. You can go inside the Buddha during certain hours, so double check before you go! Hasedera is a huge temple full of seasonal flowers that bloom continually throughout the four seasons. Hasedera is particularly famous for their hydrangea; during the rainy season, about 2,500 hydrangea flowers of over 40 species bloom. The temple is dedicated to the Eleven-faced Kannon Bosatsu, also known as Hase Kannon. There is a cave on the premises called Bentenkutsu. You can get dango dumplings and enjoy the treat while looking at the view of Kamakura and the ocean from the observatory named Miharashidai. Engakuji was founded by a Zen monk named Mugakusogen in 1282 after he was invited from Sung, China, by the 8th regent to the Shogun, Hojo Tokimune. Engakuji is the main temple of the Engakuji sect of the Rinzai school of Buddhism, and is the 2nd of the 5 great Rinzai temples of Kamakura (also called the Kamakura Gozan). It's directly in front of Kita-Kamakura Station. All of the temple precincts are officially designated historical sites and are full of Zen temple charms, such as its gorgeous main gate. Tsurugaoka Hachimangu is one of the 3 great Hachimangu shrines in Japan. It's one of Kamakura's symbols and is related to Minamoto no Yoritomo, the 1st shogun of the Kamakura shogunate. Because there were so many pigeons around, the front gate of the shrine has a motif of a pigeon. On weekends, there are often Shinto wedding ceremonies held there and you can admire beautiful brides wearing the shiromuku white wedding kimono. Kodama Gentaro, an army general from the Meiji era, is enshrined at the Kodama Jinja Shrine. Kodama Gentaro led Japan's victory over Russia in the Russo-Japanese War, and he is also well-known as the Governor-General of Taiwan. He loved Enoshima dearly, so they decided to put his shrine there in 1918. The stone-carved guardian dogs are also worth noting. The jinrikisha is the Japanese-style rickshaw, originally used throughout the Meiji and Taisho eras. You can think of them as a man-powered taxi and take a fun tour throughout Kamakura! You don't need a reservation for a ride, but if you reserve in advance, you can ask for a rickshaw puller who can show you around in your language. A ride starts from 10 minutes. Shakyou, the practice of copying Buddha sutras by hand, gives one  a sense of artistry as you don't need to understand the characters you're copying, just trace the characters beneath the sheet you're working on. In the beginning, it may seem a little difficult to copy it perfectly, but eventually you'll find yourself relaxed and focused. You're expected to copy the whole sutra within 1-2 hours.

12. Enjoy matcha tea in the bamboo garden at Houkokuji Houkokuji is a Zen temple belonging to the Kenchoji sect of the Rinzai school of Buddhism and is famous for its bamboo garden. It's a little away from Kamakura Station, but it's worth the visit. You can enjoy matcha with higashi, a type of dried Japanese confectionery, while admiring the beautiful bamboo trees making subtle sounds as the wind blows. Shirasu, whitebait, is a famous delicacy in Enoshima. Shirasu fishing in Enoshima starts in mid-March and continues until December. Fresh shirasu is slightly bitter, but it's full of umami flavour and goes well with sake. Boiled shirasu is also delicious. You can try a big bowl of it in a famous shirasu-don (shirasu rice bowl) restaurant, "Tobiccho". The Enoshima Iwaya grottos are comprised of the 152 meter Daiichi Iwaya and the 56 meter Daini Iwaya, which were naturally molded into shape over many years by the waves of the water. Once you enter the grotto, you'll feel the mysterious ambiance that is usually attributed to the legend of the Dragon God. If it isn't congested on your visit, you'll get a candle to hold as you walk through it. It's believed to be connected to Mt. Fuji. Ennoji is a fairly small temple located across Kenchoji near Kita-Kamakura Station. It's also of the Kenchoji sect of the Rinzai school of Buddhism. The statue of the Great King Emma, he who judges the dead, is believed to be one of Unkei's carvings. There are also impactful statues of the Ten Rulers of the Afterlife. When you look at the statues, you may feel the suffering of the Great King Emma.

16. Expel evil spirits with the Masaru-ishi stone at Kuzuharaoka Shrine Kuzuharaoka Shrine stands on Mt. Genji, a mountain famous for its cherry blossoms. Hino Toshimoto, a keeper of imperial archives who contributed to the fall of the Kamakura shogunate, is enshrined there. At this shrine, there is a special stone called Masaruishi, and it's a stone that expels evil. If you break a sakazuki cup against the stone wishing for whatever evil is in your life to go away, it's said that your prayer will be answered. There is also a match-making stone that is thought to help people find true love. It's said that if you wash your money (coins and bills) with "Zeniarai mizu"(money cleansing water) at this shrine, you'll become happy. Cleansing your unclean money with this spring water will also cleanse your mind. Kamakura-guu is a shrine dedicated to Morinaga Shinno, a prince who contributed to the defeat of the Kamakura shogunate and in the end had a tragic death. In  front of the Hall of Worship, a big wooden statue of Shishigashira-mamori, a lion mask used for protection, welcomes you. There is also a statue of a samurai called Nademigawari-sama, who sacrifices himself to protect worshipers. Please pat him on the same parts of your body that you'd like to be healed. You can also find the Yakuwari-ishi, a stone that helps ward off evil. Hongajuki is a temple that's part of the Nichiren sect of Buddhism. It's near Kamakura Station, and is dedicated to the Seven Lucky Gods of Kamakura as well as Ebisu, the god of wealth. The temple where Ebisu is enshrined is made in a rare octagon shape. You can get a small amulet called nigirifuku. It's made of clay and is believed to give you good fortune if you squeeze it tightly in your hand. There are five kinds: love, health, wealth, education, and good fortune. The observation lighthouse in Enoshima, known as the Enoshima SeaCandle, stands on top of the island.  At the foot of the lighthouse, there is a restaurant named Loncafe that specializes in French toast.  At the terrace table overlooking the ocean view of Enoshima, you can savor the feelings of the resort while you enjoy your delicious French toast!

Next： No.21-40 Further exciting spots and activities in the Shonan Kamakura area