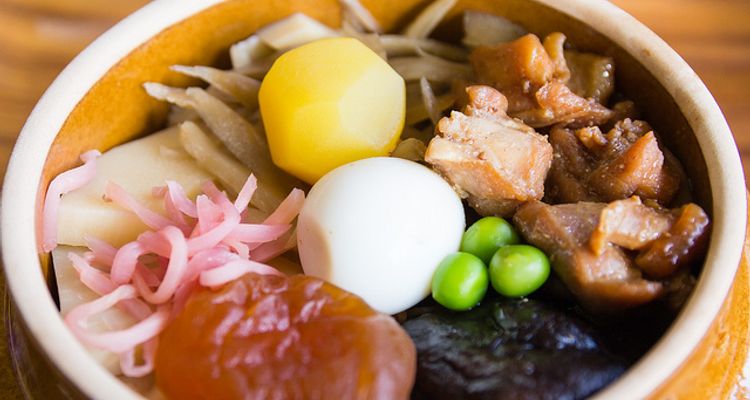 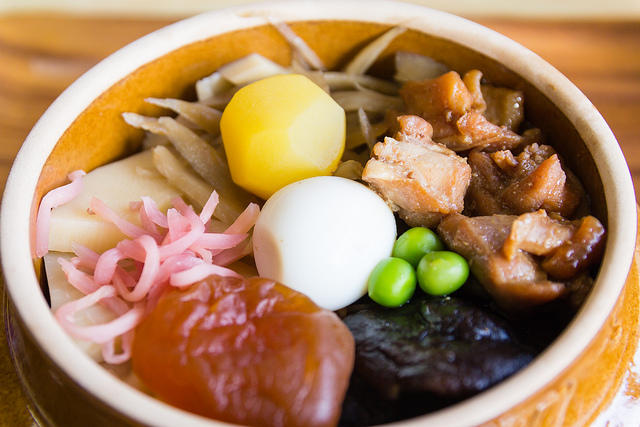 If you come to Japan and have travel in Japan, you will take Shinkansen, the most rapid train in Japan. Eki-Ben is a bento, which name comes from Eki (meaning station in Japanese) and Bento, which you can buy at the station of Shinkansen or in Shinkansen. Eki-ben is a small planet full of local dishes of that area. So take advantage of it to discover local food. The most recommended ekiben is definitely this Ika Meshi. As you can see, “Ika” means a squid in Japanese. So what do you think “Meshi” means  in Japanese?

Ika Meshi is a dish of a whole squid cooked with rice inside. Yes, “Meshi” means rice in Japanese! Ika Meshi is so popular that you can even get goodies of Ika Meshi at the station. Isn't it kawaii? Or is it just a squid to you? Toge No Kamameshi is a gorgeous ekiben with plenty of vegetables, meat and so on. Inside there are shiitake mushrooms, a  boiled egg, chicken, green peas, burdock, apricot, and more. Under these ingredients, we have of course rice! But the rice of this ekiben is cooked with various Japanese seasoning, not normal white rice. Kamameshi (釜飯) literally translates to "kettle rice" and is a traditional Japanese rice dish cooked in an iron pot called a kama. Kamameshi originally referred to rice that was eaten communally from the kama. Kamameshi was originated in a town called Takeshitakama also known as Okunamikama. Coworkers or family members either ate directly from the kama pot or by transferring the rice to individual bowls. The term emerged in the late Meiji period, and is associated with the communal eating of rice in the aftermath of the 1923 Great Kantō earthquake. Later, similar to takikomi gohan, kamameshi came to refer to a type of Japanese pilaf cooked with various types of meat, seafood, and vegetables, and flavored with soy sauce, sake, or mirin. By cooking the rice and various ingredients in an iron pot, the rice gets slightly burned at the bottom which adds a desirable flavor to the rice. Kamadesigned specifically to prepare kamameshi appeared on the market as the dish became popular across Japan, and the prepared kamameshi is placed directly on the table in its pot for the meal. A small-scale replica of the kame is used to create an individual serving of kamameshi, and the dish is now a popular ekiben. This is a sort of sushi, which you might not know. The fish used for this sushi is trout, which is called “masu” in Japanese. You are supposed to cut the round sushi with offered plastic knife by yourself like this photo. Daruma Bento contains various wild edible plants, chicken and konnyaku. Like Kamameshi, under these ingredients, we have tasty rice. The name, “Daruma” comes from the shape of this container. The Daruma doll (達磨 daruma), also known as a Dharma doll, is a hollow, round, Japanese traditional dollmodeled after Bodhidharma, the founder of the Zen sect of Buddhism. These dolls, though typically red and depicting a bearded man (Dharma), vary greatly in color and design depending on region and artist. Though considered an omocha, meaning toy, Daruma has a design that is rich in symbolism and is regarded more as a talisman of good luck to the Japanese. Daruma dolls are seen as a symbol of perseverance and good luck, making them a popular gift of encouragement. The doll has also been commercialized by many Buddhist temples to use alongside goal setting. After eating, you can keep the container. You can use it as a money box! (You can insert coins into the Daruma's mouth!) It will be a good souvenir of Japan. Hippari Dakomeshi is a bento in a pot. Akashi city in Hyogo is well known for octopus. So this bento is composed with a few (but big) pieces of octopus, vegetables and so on. (Under them, of course we have rice again!) The expression “Hipparidako” means very popular in Japanese. Exactly as its name suggests, this ekiben is very popular even among Japanese tourists!!