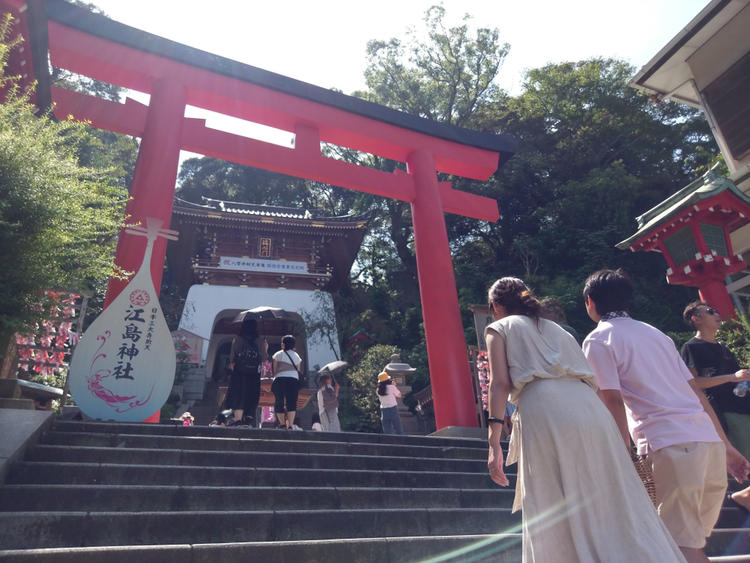 Top 10 Sightseeing Spots to Experience the Charms of Enoshima

Enoshima is a popular tourist area that attracts many visitors year-round for its beautiful seasonal flowers, delicious food fare, historical shrines, and numerous other sightseeing spots! Here are 10 of the best sightseeing spots in Enoshima to visit on your next vacation!

When it comes to popular tourist spots in Enoshima, Enoshima Aquarium, known familiarly by the nickname "Eno Sui," is an absolute must! This is one the best places in Japan to view Mt. Fuji on a clear day. Some of the highlights are the 3D projection mapping "Kurage no Sora" (jellyfish sky) in which you will encounter a magical light production, and the dolphin show held twice daily where dolphins create an exciting splash as they perform majestic jumps.

These are programs that can be enjoyed by both adults and children, so it is a recommended sightseeing spot for any tour of Enoshima. Make your way here during your visit to Enoshima!

After passing through the bronze torii, you'll see Enoshima Shrine's vermillion torii, which was rebuilt in 1937 by the Yamada School of Koto. When you walk past the torii, you'll see the Zuishinmon Gate. Zuishinmon is an unusual gate that was built to resemble the Ryugu-jo (Palace of the Dragon King from Japanese folklore), and its walls are decorated with paintings. When you pass through Zuishinmon, purify your hands at the temizuya (place for washing hands at a Shinto shrine) and continue to Hetsumiya, pass through Nakatsumiya, and make your way to Okutsumiya. Slowly pay homage at each of the three "miyas" that make up Enoshima Shrine. By taking your time you can deepen your understanding of Enoshima Shrine and you will be able to enjoy yourself and feel refreshed!

The Enoshima Iwaya Caves can be found in the innermost depths of Enoshima. The caves are made up of "Dai-ichi Iwaya" (first cave) and "Dai-ni Iwaya" (second cave). Dai-ichi Iwaya is said to be the place of origin of the religious faith of Enoshima Shrine. It has also been a sacred place associated with spiritual power since long ago. Moreover, the Iwaya Caves are said to continue as far as Mt. Fuji's Narusawa Ice Cave, and is a tourist spot of many mysteries. They offer candles for you to borrow so you can enjoy the mystical caves. Walking through the caves is difficult, so using a boat is recommended.

Enoshima Island Spa is a resort spa located at the entrance of Enoshima that aims to enhance your natural healing ability. The onsen (hot spring) gushes forth from 1,500m below ground, and you won't feel too cold after getting out of the onsen since the moisture is prevented from evaporating. The cave area and open air pools at Enoshima Island Spa are recommended because the pools are for unisex use and are entered with swimsuits on. Forget about the day-to-day and heal your mind and body at Enoshima Island Spa!

The highlights are the 4 types of plant which have been designated as natural monuments of the city: the Cook Araucaria (New Caledonia Pine), Araucaria heterophylla (Norfolk Island Pine), Pleioblastus gramineus Nakai clusters (a type of bamboo), and Osmanthus heterophyllus cv. Undulatifolius (holly olive). In winter, illuminations that are said to be among the big three illuminations in the Kanto region are held here, so it is definitely worth the trip.

Chigogafuchi is a plateau that has been formed by the erosion of the waves. It is a sightseeing spot with sweeping views of the Pacific Ocean. It is known as a famous rock fishing spot so there are often many people here. It is located right by the mouth of the Iwaya Caves, so it's a good idea to see both of them at the same time! On a clear day, you can also see Mt. Fuji from here.

The biggest highlight of Chigogafuchi is undeniably the evening scene bathed in the orange glow of the setting sun. Chigogafuchi has even been chosen as one of Kanagawa's top 50 scenic destinations, so be sure to go see this rare view at least once!

The Bell of Ryuren was built in 1996 based on the legendary wedding between the heavenly maiden, Benzaiten, and the five-headed dragon, Gozuryu, hence its name "Ryuren," which means "dragon love." It has now become a holy land for lovers. It is a tradition for lovers to visit here and ring the bronze bell to be granted eternal love, and padlocks are also hung on the fence here as a symbol of love.

The Bell of Ryuren is located in a high place, so you can also see a view of Izu Oshima Island on a clear day. Make your way here to ring the bell to deepen your bond with your partner and pray for eternal love.

An observation tower that was built in Enoshima in 1951 was renovated in 2003 as part of a project to celebrate the 100th year anniversary of Enoden (Enoshima Electric Railway), and is now called the Enoshima Sea Candle. From the observation floor, you can get a full 360 degree view of the area - you can even see all of Samuel Cocking Garden!

The landscape appears different each season and is very beautiful, but it is especially stunning during the winter illumination season. You can buy a set ticket to enter the Enoshima Aquarium and Enoshima Sea Candle at convenience stores all over Japan, so take advantage of this bargain!

The yacht events were held here at Shonan Port's Enoshima Yacht Harbor during the 1964 Tokyo Olympics. Close to 1,000 boats are anchored here. Even now, over 100 races are held in the harbor every year.

Areas that were built for rest and relaxtion in 1998 such as the Center Promenade, Tide Pool and Sazaejima continue to attract many people to this location. The breathtaking illuminations in winter are a particular highlight! Take a leisurely stroll around Enoshima and enjoy a fufilling day!

Take a Trip to Enoshima and Leisurely Enjoy its Attractions!

No two visits to Enoshima will be entirely the same, as the scenery is always changing with the times and seasons. Enoshima is a place where you can enjoy sights and tastes like you've never experienced before. Be sure to use this article as your guide to get the most out of your trip to Enoshima!