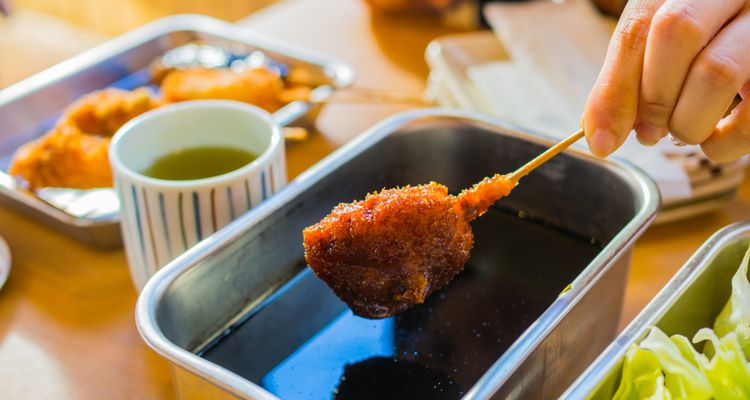 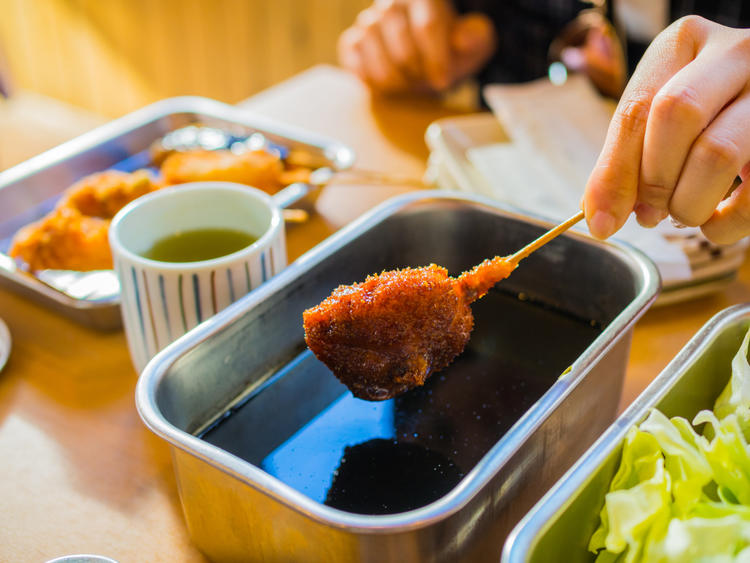 The Right Way to Eat the Famous Osaka Delicacy: Kushikatsu

If you have the chance to come to Osaka, one thing you’ll want to try is the famous kushikatsu (fried skewers). But one thing to note is that there are some special rules that you need to follow when eating this dish. In this article we will explain the charms of kushikatsu and how to eat it, as well as recommend some amazing kushikatsu restaurants in Osaka. Kushikatasu is a dish of meat or vegetables that has been cut in mouthful portions, skewered, battered and deep fried. Kushikatsu is said to have originated from Shinsekai in Osaka, and even now, you can find lots of kushikatsu restaurants in the area. The menu is typically made up of meat, fish and vegetables, with some examples including:

On top of these, some restaurants offer deep fried fruit and their own original dishes, which will really bring out your appetite.

While the two dishes may appear similar, the difference between tempura and kushikatsu is the batter. The batter in tempura uses a water, flour and egg base, however with kushikatasu, breadcrumbs are added and deep fried.

The Rules When Eating Kushikatsu

When eating kushikatsu, you dip it in a sauce. While it isn’t necessarily the case in all kushikatsu restaurants in Osaka, the sauce is usually shared between the customers, so for hygienic reasons, you aren’t supposed to dip kushikatsu that you have put in your mouth into the sauce. This is a rule you have to abide by. This container, with the “Don’t dip twice” mark on it, is the container for the sauce. This stainless container that you often see is the container for the sauce. You can also sometimes find the sauce in a jar like this.

You Can Use Cabbage to "Spoon" Sauce Onto Your Kushikatsu

When you order kushikatsu, in most cases it will also come with cabbage. There are also some restaurants where you will find the cabbage on the table already. This cabbage is not the usual finely cut cabbage, but large, roughly cut strips of cabbage. This cabbage plays a role in helping your digestion, and you can also use it "spoon" sauce onto your kushikatsu if you really need more, to get around the “Don’t dip twice” rule. Eating the cabbage by hand is also fine. A long-standing store in the famous Osaka tourist spot, Shinsekai. There are 12 Kushikatsu Daruma restaurants in Osaka, and they are all rather small and with counter-only seating. They offer about 40 different types of kushikatsu. Of course, dipping twice is forbidden, but depending on the type of kushikatsu, some are better without sauce. They also offer a variety of set menus. Please note that you can’t use cards here. This is another popular old restaurant in Shinsekai, and is again a counter only place. This restaurant is proud of the flavour and freshness of the ingredients. The kushikatsu are dipped in a thin batter and lightly fried until crispy. The kushikatsu offered at this restaurant is quite rare as it uses tallow, or beef fat. You can’t dip twice here. The bill is calculated based on the number of skewers left in the skewer pot on the table after eating. Again, you can’t pay by card here either. A famous restaurant in Shinsekai. Again, this is a counter seating only restaurant, but the restaurant itself is large and can fit many customers, although its popularity means you may have to queue to eat there.  This is of course another “don’t dip twice” restaurant. The batter on the kushikatsu at Yaekatsu is fluffy and has a light taste. The secret of the fluffiness comes from the yam added to the batter apparently. Please note that you can’t pay by card.