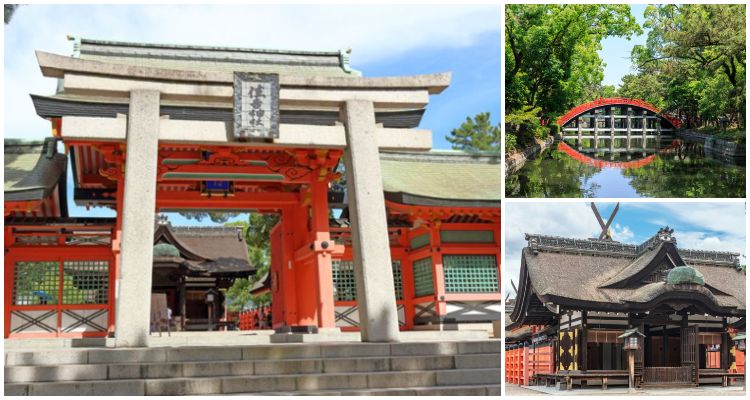 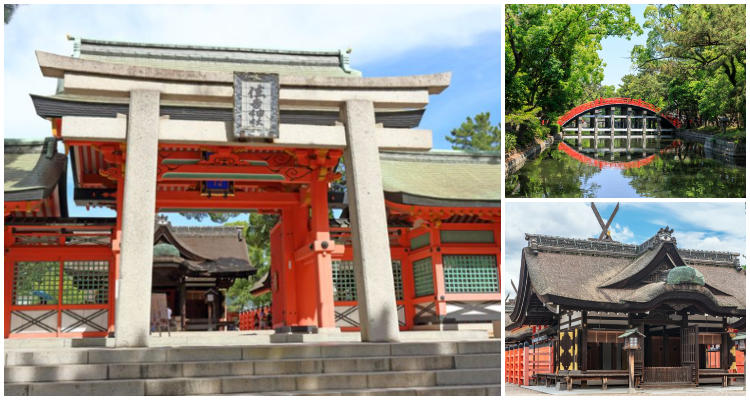 Osaka is a lively city where you can devour yummy food, go on a shopping spree and immerse in popular culture, yet its historical sites are often overlooked. The Sumiyoshi Taisha (or grand shrine), a national treasure with beautiful scenery and a long history, is one such example.

Sumiyoshi Taisha is a must-visit sightseeing spot in Osaka. It is the head of all Sumiyoshi shrines across Japan, and it worships the three gods of the sea, or the Sumiyoshi Sanjin.

Legend has it that the ancient shrine was built by Empress Jingu some 1800 years ago to honor Sumiyoshi Sanjin. She believed they had guided her to win a war against Korea, blessed her with a smooth delivery of a son who would later become Emperor Ojin, and helped her quell a rebellion within the country. She was eventually enshrined together with the three gods at Sumiyoshi Taisha.

There are two ways to travel from downtown Osaka to Sumiyoshi Taisha: taking a train on the Nankai Main Line to Sumiyoshi Taisha Station, or taking the Hankai Line tram to Sumiyoshi-toriimae Station. Hankai Tramway is the only streetcar service left in Osaka, and it is not just a mode of transport, but a remnant of a fading Showa culture as well.

After passing through the torii gateway, Sumiyoshi Taisha's famous Taikobashi (an arched bridge) comes into view. The bright red bridge encompassed by lush green trees is indeed a sight to behold. When the weather is fair and the water is calm and clear, the bridge and its reflection will be in perfect symmetry, which is why it is also known as the "reverse bridge" (or "Sorihashi").

Beyond the bridge is the torii gate characterized by its rectangular pillars, unlike others which are usually cylindrical.

Another characteristic of Sumiyoshi Taisha is the arrangement of the four main halls. Except for the hall for Empress Jingu, the other three housing the Sumiyoshi Sanjin are aligned in a straight line facing west, which is said to be a simulation of fleet formation at sea since the three gods are protectors of seafarers.

Take a closer look and you can see the edge of the cusped gable of each hall is wrapped in netting. The reason behind this, according to a blogger who is well versed in Japanese shrines, is that Sumiyoshi Taisha is an extremely popular destination for hatsumode (i.e. a person's first visit to a shrine or temple in the New Year), and each hall would reserve a large area in the front for worshippers to throw saisen (offertory coins). However, not everyone has a good aim and some coins might hit the tiles, hence the protective netting.

All four main halls are designated as National Treasures of Japan, and are built in Sumiyoshi-zukuri, an architectural style of Japanese shrines that is as ancient as the Shinmei-zukuri style of Ise Grand Shrine and the Taisha-zukuri style of Izumo Taisha, perhaps the two most significant shrines in the country. The Sumiyoshi-zukuri and Shinmei-zukuri styles are similar: both have a roof that looks like an open book (Kirizuma-zukuri), and the flooring is raised. Scholars believe these features can be traced back to barns from the Yayoi period (1000 BC - 300 AD).

Even ducks occasionally come ashore to take a stroll!

To tourists, Osaka might be a modern metropolis, but its cultural heritage is just as fascinating. The next time you visit Osaka for the food, shopping and popular culture, do take some time to stop by the national treasure Sumiyoshi Taisha to admire its stunning view and learn about its rich history as well.