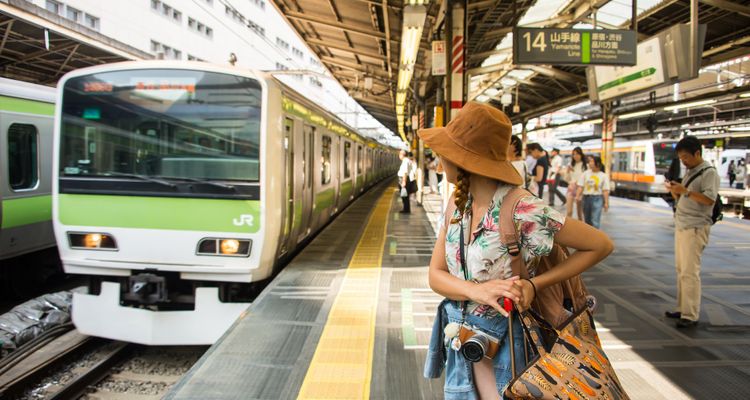 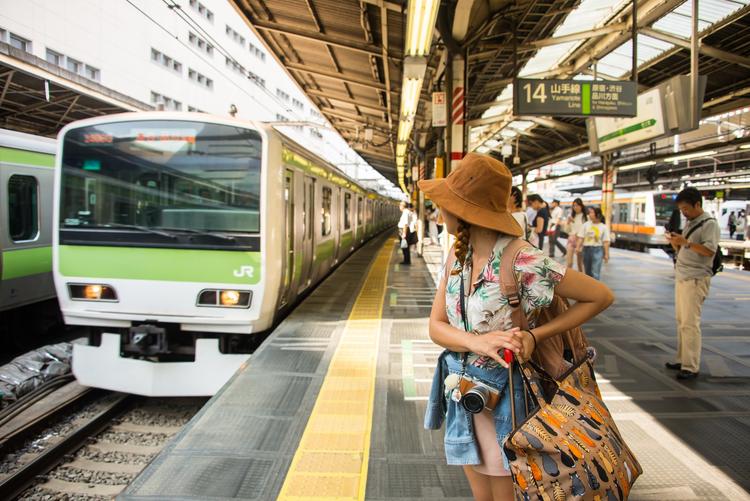 Sightsee in Tokyo Without Leaving the Yamanote Line

With around 800,000 daily passengers, the JR Yamanote Line is one of the busiest trains in all of Japan. Serving the capital since 1885, it has grown into a total of 29 stations with access to much of Tokyo. Owing to its looping route and convenient connections, boarding the Yamanote Line is also a handy way to sightsee. To help you save travel time, we’ll take a look at the Yamanote counter-clockwise route and highlight a few tourist spots you can visit without straying too far!

With a sizable chunk of Tokyoites using it on the regular, Shinjuku Station is what gets Tokyo moving. JR Shinjuku Station alone receives over half a million passengers daily, ranking as the busiest station in all of Japan!

The area around Shinjuku Station is filled with countless stores, restaurants, and offices, naturally overwhelming most first-timers. To start, we’ve picked out two of Shinjuku’s most popular tourist spots – both just a short walk from the station.

A sanctuary in the midst of Tokyo’s concrete jungle, Shinjuku Gyoen National Garden is one of the best places to experience the seasonal beauty of Japan and escape the stresses of city life.

In spring, follow the lead of locals and picnic under the stunning cherry blossom trees, while in autumn, stroll through the vividly colored maple trees in the Japanese Garden, one of three themed gardens alongside the English Garden and French Garden. Throughout the year, you can take a look at the collection of tropical and subtropical plants in the greenhouse, or visit the park’s restaurant and cafe for delicious bites!

Being Shinjuku’s main entertainment district, Kabukicho is just as energetic as you’d expect it to be. Hundreds of restaurants and bars offer endless choices for food and drink, while those in the mood for shopping can let loose at the multistory Don Quijote. Photographers will also be unable to resist the terrifying Godzilla statue, hovering over the Toho Cinemas building.

Just like Shinjuku, Shibuya is a station familiar to virtually everyone in Tokyo. The crowds here tend to be younger, drawn in by trendy fashion and cheap bars making for a great weekend hangout.

The moment you exit JR Shibuya Station, you’ll see one of Tokyo’s most recognizable icons, Shibuya Crossing. Neon lights, blaring music, and large crowds moving every which way, Shibuya Crossing is an amalgamation of everything Tokyo.

While here, you shouldn’t miss out on seeing another icon of Japan – Hachiko. This beloved statue keeps the story of the loyal dog Hachiko alive, who waited patiently for his owner at Shibuya Station everyday even after his death. Nowadays, the statue is a popular meetup spot for Shibuya regulars.

While Harajuku Station is seen as another magnet for younger crowds, the area is actually quite diverse, and there’s something for everybody.

Up until 2020, Harajuku Station flaunted a gorgeous Western-style brick and wood exterior setting it apart from other stations. However, it was recently renovated into a modern style to alleviate overcrowding and provide more amenities to visitors. Although the iconic exterior may be gone, this renovation has given Harajuku a much-needed facelift, and is far more convenient to use.

Meiji Jingu is one of Tokyo’s most famous shrines and a great entry point into the traditional side of Japan. Named after Emperor Meiji, this Shinto shrine was established in 1920 to commemorate the Emperor and his consort, Empress Shoken, after their deaths in the early 1900s.

Several elements of Japan’s unique Shinto religion can be seen within the shrine grounds. Upon entering, you’ll be greeted by a towering torii gate symbolizing the crossing of a sacred area. Inside, you’ll find Meiji Jingu’s grand main sanctuary with fixtures like ema votive tablets, consecrated sake barrels, and more, proving that tradition is still alive in this modern city.

The 400-meter-long Takeshita Street is colored by rainbow cotton candy and sickly sweet, fruity crêpes – a perfect fit for its uber-kawaii inhabitants. The clothing, makeup, and accessory stores of Takeshita Street are overwhelmingly cutesy, making it an excellent place to spot “only in Japan” fashion styles. Even if you’re not into fashion, Takeshita Street has plenty of unique souvenir stores for something offbeat to bring back home.

If you’ve gotten to Hamamatsucho Station from Shinjuku, then you’ve officially made it past the halfway point of the Yamanote Line! Although more commonly used for work commutes, the lesser-known Hamamatsucho is definitely worth a visit!

Founded in 1393, Zojoji Temple began as a humble Buddhist seminary. It wasn’t until 1598, when Tokugawa Ieyasu, one of Japan’s “Great Unifiers,” came to Zojoji that it grew to become what it is today. Ieyasu relocated Zojoji to its current location and proclaimed it his family temple, kicking off the construction of more extravagant temple buildings.

Even after several disasters and reconstructions, Zojoji Temple still stands strong. It is set apart from other temples by the Mausoleum of Tokugawa Shoguns, where six Tokugawa shoguns, their families, and Imperial Princess Kazunomiya, are buried. Visitors can access these separate grounds for a fee.

An icon of the city, no sightseeing tour of Tokyo is complete without a visit to Tokyo Tower. Built in 1958 as a broadcasting tower, its appeal has grown far beyond its original purpose, and is now considered a tourist spot first and foremost.

Tokyo Tower is worth visiting both day and night. During the day, you can do some souvenir shopping or take a Top Deck Tour for jaw-dropping, highly-detailed Tokyo views. Then rediscover its charm after dark through enchanting illuminations overlooking a breathtaking sea of twinkling city lights.

Similar to the old Harajuku Station, Tokyo Station is famed for its grand Western-style exterior, serving as a popular attraction within itself. Opened in 1914, Tokyo Station is an architectural masterpiece of sprawling brick walls and domed slate roofs. The interior is just as elaborate, adorned by majestic sculptures of eagles and zodiac animals on the ceiling watching over commuters.

One of the biggest appeals of Tokyo is the sheer diversity between neighborhoods. Like Harajuku being Tokyo’s kawaii capital, Akihabara is a haven for “otaku” or “nerd” culture, making Akihabara Station a must-stop for fans of anime, manga, gaming, cosplay, and more.

Upon exiting Akihabara Station, you’ll soon find yourself in Akihabara Electric Town. Also known as “Akiba,” this Tokyo district is an eccentric hub of arcades, maid cafes, anime/manga shops, and electronics outlets attracting hobbyists from all over the world.

Big fan of manga and anime? Head straight for Animate and Mandarake, both filled with countless stacks of one-of-a-kind merchandise. How about video games? Then get your game on at one of Akiba’s colorful arcades, or pop into an electronics store for a wealth of home gaming essentials. You can also let loose with an anime song night at Club Mogra, treat yourself to bizarre maid service at “at-home cafe,” or just gawk at all the surrounding craziness!

With three unique spots all within a 10-minute walk of each other, Ueno Station is the perfect base for a whole day of Tokyo fun!

Japan’s main museum, the Tokyo National Museum is considered the oldest institution of its kind in Japan, celebrating 150 years in 2022. Boasting over 120,000 items of all ages and origins, the museum also has ever-changing exhibitions and events that’ll teach you something new with every visit.

Similar to Shinjuku Gyoen, Ueno Park brims with seasonal beauty like springtime cherry blossoms and fall foliage. There’s also a huge pond full of water lilies accompanied by a grand temple. You can take in these marvelous views while relaxing on one of the many benches, or get some exercise on a duck-shaped paddle boat!

Those in the mood to make some furry friends, Ueno Zoo is located just north of the park. The zoo is quite spacious, and with their relatively cheap ticket prices, you’ll get more than your money’s worth! Ueno Zoo’s west garden has attractions like a panda forest, an Animals of Africa section, and a petting zoo. In the east garden, you can meet Japanese macaques, tigers, elephants, gorillas, and much more.

Closing our Yamanote Line sightseeing is Ikebukuro Station. Considered another of the line’s major stations, it serves as the connection between Tokyo and its northern neighbor Saitama. As a result, the area around the station tends to be lively, with lots of shops and restaurants to explore!

Although Sunshine City might just seem like a regular shopping mall, don’t be fooled – it has some of the best selections of specialty stores in the entirety of Tokyo!

There are several big-name character stores that any fan will love, including a Pokémon Center, Sanrio vivitix, Disney Store, Donguri Republic (for Studio Ghibli), One Piece Mugiwara Store, and a Marvel Store. On top of that, there’s also the Sunshine Aquarium on the rooftop, hosting lovable aquatic animals like penguins, seals, squids, frogs, jellyfish, and more.

The Heart of Tokyo Is on the Yamanote Line

The Yamanote Line is part of what makes Tokyo such a great city. It not only provides unrivaled access, but it’s also an excellent way for the time-saving tourist to see a myriad of amazing attractions. Each station will give you a different taste of Tokyo, encouraging a diverse palette of unforgettable sights and experiences.