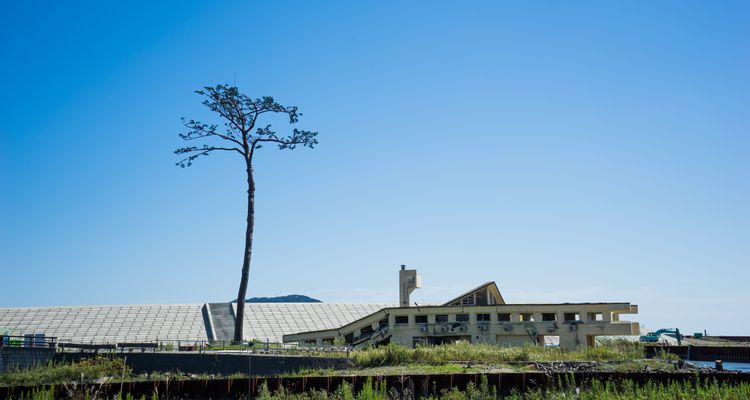 Just over ten years ago back in 2011, the quiet town of Rikuzentakata along the southern Sanriku Coast in Iwate Prefecture was nearly wiped off the map by the horrific 3.11 earthquake and tsunami that shook the region to its core. Today, however, Rikuzentakata stands strong and is bustling with life. Nearly 20,000 people call this town home and are once again welcoming visitors back to their coastal paradise with open arms. This is the story of the struggles faced by the town, the challenges they overcame, and the incredible resilience of the local people.

The History of Rikuzentakata

Many different groups throughout history have called this peaceful little seaside enclave home from time to time. The earliest group noted in this area were the Emishi people, a group of indigenous people in Japan that were gradually pushed further north over time by the Yamato. The Yamato are the modern-day ancestors of Japanese people today. Sound familiar? This is actually the historic event that the plot of Hayao Miyazaki’s Princess Mononoke was largely based on.

Following the fall of the Emishi and the rise of the Yamato during the Edo Period (1603 - 1867), Rikuzentakata fell under the rule of the Date clan. During that time, the Date clan was loyal to the Sendai domain, and the area that present-day Rikuzentakata was founded upon was mostly used for mining, forestry, and fishing. In addition, the town was popular with wealthy members of society and governing elites as a place to get away and enjoy the gentle ocean breeze during the heat of the summer.

A Tide for the Worst

At 2:46 PM on March 11th, 2011, the world watched in horror as Japan experienced one of the most devastating natural disasters in recent history. A powerful earthquake tore through the land, leaving only rubble in its path, and a tsunami with waves as tall as 10 meters crashed down upon the northeastern coast of Japan.

While the damage nationwide was beyond expectation, Rikezentakata was one of the towns that was hit the hardest, and by the time the waves had returned to the sea, nearly nothing of the town could be found. According to official police reports, every building less than three stories high was completely flooded, and what very few buildings remained were just skeletal shells of where a house once stood.

More devastating than the destruction that occurred was the sheer loss of human life that took place. The official death toll for Rikuzentakata has been slated as 1,763 people, accounting for nearly 10% of the entire population of the town. The reason that these numbers are not exact, however, is that many of the bodies of the victims were never found.

A Miracle When All Seemed Lost

Before the tsunami and the events of 3.11, what is it that attracted so many to visit this tiny northern coastal town? While delicious seafood and a relaxing atmosphere were part of the draw, the real attraction to this hidden paradise was the famed "Takata-Matsubara."

"Takata-Matsubara" was a thicket of over 70,000 emerald green pine trees that proudly stood in contrast to the snow white sandy beaches of Rikuzentakata’s coastal line. The trees were said to have been planted by a local merchant under the instruction of Date Tsunamune in 1667 as a way to protect the town from the strong ocean winds during storms. During the Showa Period (1926 - 1989), Takata-Matsubara was added to Japan’s list of 100 Landscapes of Japan, and in 1940, it was officially designated as a National Place of Scenic Beauty in Japan.

After the 3.11 disaster, as the residents began to return to their former homes to assess the damages for themselves, hope for the future seemed bleak. The town had been razed to a point beyond recognition. And where the verdant pride of the town once stood, only a bramble of splintered sticks and roots were left.

Among the chaos, the destruction, and all the pain, one lone pine tree stood tall among the ruin. Out of the thousands of pine trees that had once graced Rikuzentakata’s coast, this one pine tree had made it, almost as if to send a message of hope and inspiration to the people of Tohoku. Cast as a symbol of the strength, resilience, and sense of unity that the people of Tohoku share, the tree was dubbed as the “Miracle Pine Tree.” To this day, the Miracle Pine Tree stands as a reminder of how far the people of Rikuzentakata have come.

Flash forward to today, RIkuzentakata has made tremendous strides towards recovery and proudly welcomes visitors back to its peaceful glades. Most of the families that were relocated have returned home, and the town has now been beautifully reconstructed to accommodate the return of tourists. If you’re thinking about checking out what makes this town so special, here are some of the most popular tourist destinations that really make Rikuzentakata shine:

Next to the newly erected seawall protecting the reconstructed Rikuzentakata Town lies the Iwate Tsunami Memorial Museum to commemorate the lives lost, the challenges overcome, and the recovery process of the people of Iwate Prefecture. See a chronological exhibit of artifacts and photographs documenting the disaster, and hear guides talk about their personal experience with the event. Close by is also the Miracle Pine Tree that is still standing and perhaps the city’s most iconic landmark.

A gentle hike that offers a beautiful view of the entire city of Rikuzentakata and the ocean from above. The mountain is topped with a Shinto shrine known as "Hikami-jinja" and the mountainside is said to be most beautiful during autumn when fall foliage colors are on full display. The ascension should take no more than two hours at a leisurely pace.

Located on the Otomo Peninsula, this craggy cape is an enjoyable spot that offers a spectacular gaze of the azure blue seas of the Pacific along the Sanriku Coast. It makes for a lovely spot to walk around, have a picnic, or just enjoy being out in nature.

The Kesen Carpentry And Folklore Museum preserves the traditions and techniques of one of Japan's four great schools of carpentry, Kesen, which have been passed down for centuries. Hear the stories of master carpenters and see the delicate hands of the artisans at work as they carve thousands of years of history and experience into simple pieces of wood.

Getting to and Around Rikuzentakata

If you’re coming directly from Tokyo, take the JR Tohoku Shinkansen to Ichinoseki Station from Tokyo Station (150 minutes, 13,000 yen) and then the JR Ofunato Line to Kesennuma (80 minutes) and then take the JR bus to Rikuzentakata (another 30 minutes). Going through Ichinoseki Station is also the best way to reach Rikuzentakata if you are coming from other parts of Tohoku such as Sendai or Morioka.

Just note that getting to and around Rikuzentakata without a private car can be difficult as public transportation is not widely available and often seasonal. One recommendation is that you rent a bicycle or participate in a bike tour that can be arranged at the Rikuzentakata Bussan Center connected to the Iwate Tsunami Memorial Museum. The town has excellent infrastructure for cycling and tends to have pleasant weather between April and November.

While the loss of what once was can never truly be forgotten, since 2011, Rikuzentakata has come so far and made such significant strides towards recovery. One of the ways that Rikuzentakata continues to honor the lives lost and keep the memory of the old Rikuzentakata alive is through the Rikuzentakata Project founded in 2015 by Rikkyo University. This 5-day program is held regularly in English with the intention of educating people from all over the world about the events of 3.11 and what the recovery process has looked like for the town.

In addition to the Rikuzentakata Project, the town offers a number of other interesting cultural tours such as fishing, oyster harvesting, and "wakame" seaweed cultivation. To learn more about the exciting opportunities made available in this off-the-beaten-path destination, check out the official Rikuzentakata City website.

Even if you can't make it to Rikuzentakata personally, there are still ways to support its recovery. This includes Kickstarter projects, such as the SANRIKU FIREWORKS FESTIVAL 2022, which allows you to help fund a fireworks show for the area livestreamed on YouTube.