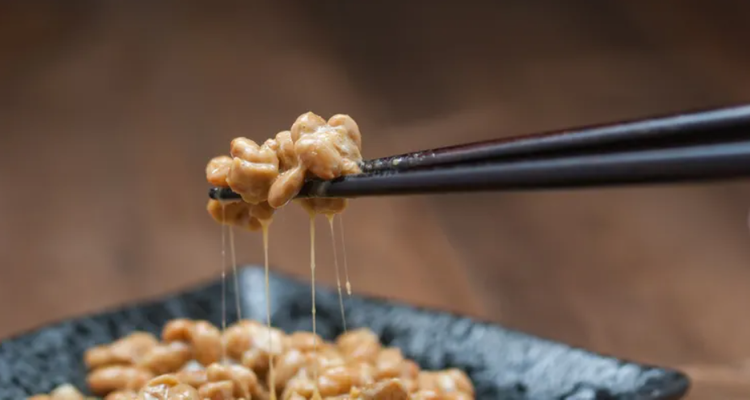 Natto - The Japanese Soybean Superfood with a Peculiar Taste

Natto is a traditional Japanese food that is well known for its many health benefits. Natto has long been a staple of the Japanese diet and is often called a "superfood," being low in calories and loaded with nutrients. Though it is much loved in Japan, natto’s bitter taste, potent smell, and gooey texture polarizes opinion. Like many foods with a distinctive character, natto is something of an acquired taste, with people tending to either love it or hate it. In this article, we’ll tell you everything you need to know about natto!

Natto is a sticky Japanese food made from fermented soybeans. To create natto, soybeans are soaked for several hours before being steamed and then fermented with a type of bacteria called Bacillus subtilis. The fermentation process lasts for around 24 hours and it is this that gives natto its very distinctive taste, strong smell, and slimy, stringy texture.

Natto has a long history as part of the Japanese diet. Thought to have been introduced to Japan from China around 1400 years ago, there are records of a sticky soybean snack in Japanese literature stretching as far back as the 13th century. Many Japanese people raised on natto are used to the strong flavor and sticky consistency, as well as its overpowering aroma, which is likened to the smell of ammonia.

Natto has a deeply earthy taste that is hard to accurately pinpoint, though it is often compared to the musty or bitter flavor of a strongly aged cheese. During the fermenting process, natto takes on an incredibly pungent odor reminiscent of moldy cheese. Because of its harsh smell and stringy texture, natto is a tough sell to those who believe the first bite is with the eye.

The flavor, scent, and texture of natto can vary slightly depending on the type of soybean and fermentation process. There are several different types of soybean yielding a wide variety of natto through a number of ancient regional recipes. The most common natto is the sticky, smelly, unsalted variety called “itohiki natto” that can be easily found throughout Japan.

How Do You Eat Natto?

In Japan, natto is commonly eaten with white rice, typically as part of breakfast. Natto can also be eaten on its own as a snack and is commonly sold in small containers. As a snack, natto is usually mixed with soy sauce and a Japanese mustard called “karashi.” Mixing natto with soy sauce and mustard enhances the taste, bringing out a much more savory flavor called “umami” in Japanese.

Stirring the natto beans also creates the sticky stringy texture that it is famous for. The longer you stir natto the fluffier the texture becomes and it will eventually lose some of its stickiness. Stirring natto for longer is also said to greatly enhance the flavor. Some suggest that natto needs to be stirred up to 400 times for it to reach the perfect flavor.

What Are the Health Benefits of Natto?

Natto is packed with nutritional goodness, including a number of essential vitamins and minerals. Natto is high in calcium, potassium, fiber, iron, magnesium and is also rich in protein. Natto is also a great source of vitamin C, vitamin E as well as vitamins B2, B6, and K2. Long considered a superfood, natto is often credited with being at least partly responsible for Japan’s long life expectancy.

Thanks to its impressive list of vitamins and minerals, natto is good for the heart as well as the digestive system. Studies have shown that natto helps to reduce blood pressure and break down blood clots. Being fermented, it is also good for the body’s metabolism. The fermentation process makes natto high in probiotics, which help the body digest food and promotes a healthy balance of bacteria in the gut.

How To Make Natto Taste Good

It is very common in Japan to add seasoning or a few simple ingredients to enhance the flavor of natto. For breakfast, natto is often served on warm rice topped with raw egg flavored by a sprinkling of either soy sauce, sesame seeds, or shredded seaweed.

Natto can also be topped with shredded daikon or finely chopped spring onions, which helps to reduce the pungency. A squeeze of mayonnaise is another popular topping which can add a little sweetness and remove some of natto’s bitterness. Tinned tuna is another common addition to natto and rice. For a final kick (and greater health benefits) you can also throw on a helping of spicy kimchi!

How to Add Natto to Your Diet - Some Simple Natto Recipes

There are a number of natto recipes you can follow to add this soybean superfood to your diet.

To make natto omelet, first mix the natto beans with soy sauce and karashi mustard. Break two eggs into a bowl and add the natto along with additional seasonings, such as salt, pepper, or finely-chopped parsley. Pour the mixture into a frying pan and cook for 4 or 5 minutes on moderate heat. Fold the omelet in half before removing from the pan. Cut the omelet into slices and serve with mayo or ketchup.

One way to enjoy natto without the sticky texture is by using it as an ingredient in soup. For miso soup, start by finely chopping spring onions and mushrooms. Add these to a pot of water with dashi powder and bring to a boil before reducing to a simmer for around 3 minutes. Next, turn off the heat and add natto. Finally, add a generous spoonful of miso paste. Stir the soup until the miso paste dissolves and then serve.

Where to Buy Natto

In Japan, most varieties of natto can easily be found in supermarkets and convenience stores. Natto usually sits in the refrigerated aisle alongside other common Japanese ingredients such as tofu. If you’re wondering where to buy natto outside of Japan, the best place to look is in Asian grocery stores or supermarkets. Natto is often sold frozen overseas, so check the freezer aisles if you can't find it elsewhere. Alternatively, you can also purchase natto online.

Whether you love it or hate it, natto is undoubtedly one of the healthiest foods you can eat, and is touted as one of the reasons that people in Japan live so long. Despite these benefits, the distinctive taste, powerful smell, and sticky texture makes it one of Japan's most divisive dishes. If you're interested in adding this fermented soybean wonderfood to your diet, try one of our suggested natto recipes to enhance the flavor while giving your body the natural goodness it craves.