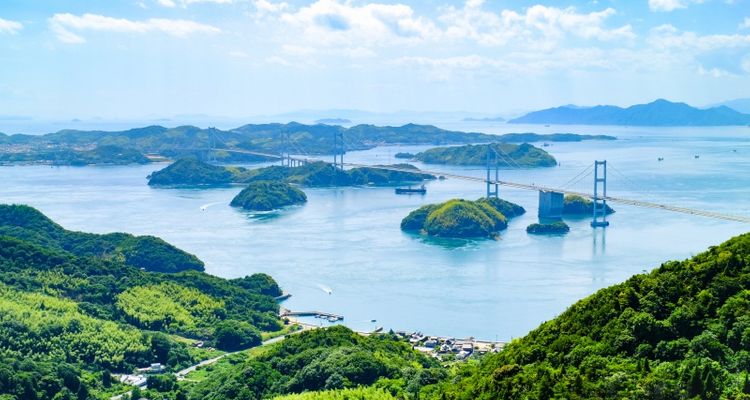 Resting between Honshu, the main island of Japan, and the island of Shikoku, the Seto Inland Sea is famous for its tapestry of dynamic and distinctive islands. Within this region lie two national parks filled with gorgeous coastline scenery and majestic underwater seascapes teeming with fascinating marine life. These parks are ideal for those passionate about marine sports, such as diving, snorkeling, and swimming. The area around the Seto Inland Sea is also warm and dry, leading to a prosperous industry of farms producing world-renowned citrus fruit and olives, making for great gifts to take home!

The Pinnacle of Natural Beauty

Japan's national parks are selected through a strict list of criteria, including natural beauty and accessibility. As such, they are considered the country’s most recommended destinations for visitors. Although there are areas directly managed and protected by the national government, the Japanese government does not necessarily own all the land and there are often numerous locals living within national park boundaries. This is majorly different from national parks in countries like the United States, whereby the federal government owns most of the land and is responsible for protecting its resources.

Japan's national parks are wonderful destinations protecting nature and wildlife while allowing visitors to appreciate the scenery and enjoy hot springs, hiking, and other outdoor activities alongside the history and culture of the area. This article will introduce the highlights of two national parks in Shikoku along with how to best enjoy them. Discover the characteristics of each area and get a head start on planning the ultimate Japan nature trip with our Shikoku national park guide below!

Setonaikai National Park: Feel the Ferocity of Whirlpools Up Close

Setonaikai National Park uniquely incorporates a portion of the sea itself along with numerous islands and inland areas bursting with a plethora of views. In fact, it is so vast that it crosses 11 prefectures: Osaka, Hyogo, Wakayama, Okayama, Hiroshima, Yamaguchi, Tokushima, Kagawa, Ehime, Fukuoka, and Oita!

The Seto Inland Sea (Setonaikai) is a place of rich cultural history where people have coexisted with nature since ancient times. Touring the islands that call it home, you’ll witness numerous pleasant scenes of locals living in harmony with nature, including a collection of terraced fields and port cities awaiting the changing tide. The towns of Ushimado, Shimotsui, Tomonoura, Onomichi, Mitarai, and Murozumi are particularly popular amongst tourists for their beautiful, historic townscapes.

Another popular tourist destination in the Seto Inland Sea are the Naruto whirlpools. This natural phenomenon is formed through the unique geography of the Naruto Strait, which has both deep ocean trenches and shallow shoals along with swift tidal currents flowing in from the Harima Sea and Kii Channel and colliding with each other. Numerous whirlpools of varying sizes can be seen at both low and high tide, reaching a maximum diameter of 20 m during spring tide.

The Hiroshima side of Setonaikai National Park also incorporates the legendary Itsukushima Shrine and Mt. Misen, a World Heritage Site. The great vermilion torii gate sitting in the water along with rows of elegant wooden structures create a breathtakingly beautiful scene adorned by islands in the background. Mt. Misen, which has long been the object of mountain worship, offers lush virgin forests with well-maintained paths, making it possible for even beginners to hike.

*The torii gate is currently under renovation.

Ashizuri-Uwakai National Park is characterized by magnificant coastlines, a rich underwater environment blessed by the Kuroshio Current, towering 1,000-meter inland mountains, and the diverse landscapes of Ehime and Kochi Prefectures. It is also a sought-after destination for snorkeling and diving enthusiasts.

The region is dotted with a vast assortment of shorelines shaped and transformed by their geographic locations. The Ashizuri area itself hosts a wide horde of grand cliffs and oceans of subtropical sea life and coral reefs born from the warm waters of the Kuroshio Current. In particular, the large white coral reefs of Minokoshi Bay in Tosashimizu City, Kochi Prefecture, are well worth seeing. Nearby, the fascinating Tatsukushi Coast is filled with strangely shaped rocks formed over the centuries by the wind and waves.

The Uwakai area, on the other hand, has a ria coastline with intricate inlets and beautiful island scenery. It also has masses of soft coral and enchanting underwater seascapes lovingly known as “underwater flower fields.” Even if you don’t swim, you can still enjoy the underwater views from a glass-bottom boat or underwater observatory. Inland, the Nametoko Gorge in the upper reaches of the Shimanto River presents jaw-dropping valley scenery featuring smooth granite riverbeds, untouched forests, and a chain of waterfalls featuring the famed Yukiwa Falls.

With renowned destinations like the island-hopping cycling road of Setouchi Shimanami Kaido and the art island of Naoshima in Kagawa Prefecture, it’s clear just how much there is to enjoy in Shikoku and the Seto Inland Sea! The two national parks introduced in this article are likewise packed with non-stop sightseeing potential, including visiting temples and shrines, relishing works of art, cycling, hiking, and plenty of marine sports, allowing you to make plans that suit your passions. If you’re looking to escape the cities and dive into the best of Japanese nature on your next Japan adventure, definitely be sure to check out the national parks of Shikoku!