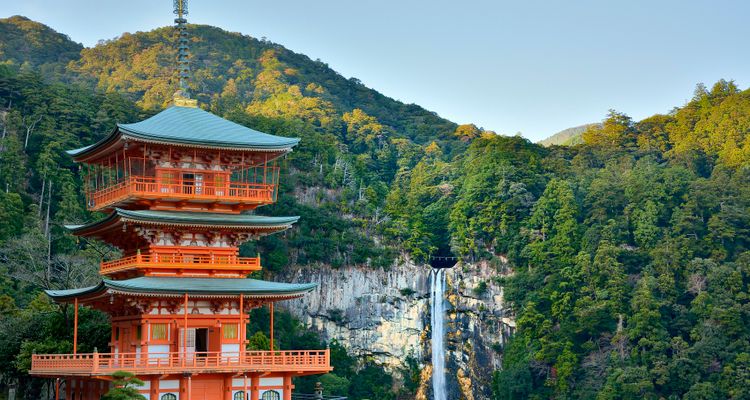 How to Enjoy the National Parks of Kansai: Dive Into Vast Nature and Deep Spiritualism

In this article, we’ll guide you through the three national parks of the Kansai region of Japan, which consists of the prefectures of Osaka, Kyoto, Hyogo, Nara, Shiga, and Wakayama. Each park facilitates a deep, authentic encounter with Japanese beauty, history, and culture through expansive wilderness and remote temples, shrines, and the ancient trails connecting them - one of which is a World Heritage Site! If you’re planning to visit places like Kyoto or Osaka, then definitely add a national park or two to your itinerary to escape the crowds and get a taste of the great outdoors!

An area can only be designated as a national park in Japan if it meets very strict criteria such as having ample natural beauty and accessibility, making them some of the country’s top tourist destinations.

Interestingly, although the Japanese government manages and protects these areas, they don’t necessarily own the land, and there are often numerous locals living within national park boundaries. This is very different from national parks in countries like the United States, where the federal government owns most of the land and is responsible for protecting its resources.

Japan's national parks are amazing destinations dedicated to the protection of nature and wildlife, allowing visitors to relish stunning landscapes, hot springs, hiking, and other outdoor activities alongside the history and culture of the area.

This article will showcase the three national parks of Kansai, including their biggest highlights and how to make the most of each!

Yoshino Kumano National Park covers the mountainous regions of Nara, stretching from Mt. Yoshino to Mt. Omine and Mt. Odaigahara, the stunning coral reefs of the Wakayama coastline, and the mountains and rivers of Mie. With such diverse scenery, it’s famed as a resource-rich, nature-abundant park showcasing a pristine, untouched side of Japan.

The routes going from Mt. Yoshino to the Omine Mountain Range were registered collectively as a World Heritage Site in July 2004 under the name “Sacred Sites and Pilgrimage Routes in the Kii Mountain Range.” Even today, there are numerous pilgrims clad in white traversing the Omine Mountains, heading to various sacred places for ascetic practices.

One notable route is the popular Daimon-zaka, a 650-meter-long stone path heading to the sacred site of Mt. Nachi. It is one of the sole paths in the world designated as a World Heritage Site. Other stunning sights include Nachi Falls with its staggering 133 meter drop and the accompanying vermilion‐lacquered Nachisan Seiganto-ji 3-Storied Pagoda. Ascend to the top of the pagoda for a fantastic view of the waterfall!

During spring, visitors can delight at the blooming wild mountain “yamazakura” cherry trees on Mt. Yoshino. In April, around 30,000 cherry blossoms of 200 different species, many of them ancient and native to the area, engulf the mountain and dye it an enchanting hue.

Alongside mountains, Yoshino Kumano National Park also boasts stunning underwater scenery along the Kii Peninsula, born from the warm Kuroshio Current. The enormous array of stony corals and tropical fish attracts divers from all over Japan.

San'inkaigan National Park is a roughly 75 kilometer stretch of coastline from Kyoto’s Kyotango City in the east to Tottori City in the west. It’s renowned for its diverse tapestry of coastal terrain, with mountainous land directly touching the ocean to form a ria coastline flaunting sea cliffs, sea caves, shore reefs, and more.

One of the most famous sights at this national park is Hasakari Rock on the eroded rocky reefs of the Takeno Coast in Hyogo, which was formed by a rock on the roof of a sea cave that fell and was caught between the cave's two rock walls. The name “Hasakari” means “caught between” in the local dialect. Appearing like it could fall any minute yet remaining sturdily in place, it is visited by flocks of people praying for luck during exams or job hunting.

Another highlight are the Tottori Sand Dunes, which were formed by sand carried from marine erosion and the estuary. These are Japan’s largest sand dunes, spanning a whopping 16 kilometers east to west and 2.4 kilometers north to south, with beautiful wavy patterns formed by the wind along the undulating hills and sand pits.

When staying in the area, there’s nowhere better than the renowned Kinosaki Onsen, which is part of the national park. The drooping willows lining the town's riverside and rustic, homely architecture weave together an enchanting atmosphere sure to endear you. Many visit between November and March for fresh crab as that's when the annual fishing ban is lifted. Give it a taste!

Setonaikai National Park is spread over a whopping 11 prefectures - Osaka, Hyogo, Wakayama, Okayama, Hiroshima, Yamaguchi, Tokushima, Kagawa, Ehime, Fukuoka, and Oita, making it the largest national park in Japan. It covers the expansive Seto Inland Sea encased by the Japanese mainland as well as the landmasses of Shikoku and Kyushu, and includes all the islands within and coastal lands looking over them.

Having long been a forerunner in local culture and harmony between humans and nature, the region is characterized by quaint harbor towns, seaside shrines and temples, and distinctive Japanese architecture blending in with the surrounding wilderness.

The park’s most iconic sight is the World Heritage Site of Itsukushima Shrine, which is adorned by the Misen primeval forest in the background. Itsukushima Shrine was established in 593, and its main building was placed upon the sea as it is today in 1168. The unique design is said to be due to the entire island of Miyajima being regarded as a deity, so cutting down trees and disturbing the earth would have been the same as injuring its sacred body.

Behind Itsukushima Shrine is Mt. Misen, which has been worshiped since ancient times. Boasting a well-maintained climbing trail, even beginners will be able to reach the peak with ease. The summit lookout presents a stunning panorama of the Seto Inland Sea and is well worth the hike.

Cyclists will adore the Shimanami Kaido, an approximately 60 kilometer stretch of road made from seven bridges that straddles the picturesque islands between Onomichi in Hiroshima and Imabari in Ehime. The refreshing seaside breeze and striking island scenery has earned it a well-deserved reputation as Japan’s leading cycling route.

The tumultuous whirlpools that form in the Naruto Strait between Tokushima and Awajishima Island in Hyogo is another of the national park’s unmissable sights. Due to the peculiar underwater terrain of the Naruto Strait, numerous whirlpools of different sizes appear at low and high tide. During a spring tide, massive whirlpools of up to 20 meters in diameter have been known to appear. If you board one of the sightseeing boats, you’ll be able to feel their intensity up close.

Complementing the coastal scenery is the equally charming landscape of Mt. Rokko, a 931-meter-tall mountain reachable after a 30 minute drive from the center of Kobe in Hyogo Prefecture. There are plenty of hiking routes through its luxuriant forests that are suitable for both beginners and experts alike, along with Rokkosan Pasture to get up close with animals for year-round family fun. Recently, a shared office has opened up, allowing stays within the forest for relaxing yet productive workations.

Uncover the Natural Bliss of Kansai Through National Parks

As we’ve seen, the national parks of Kansai are teeming with a diversity of life, scenery, and culture. From sacred sites hidden amongst isolated mountains to nature-filled spots right by vibrant cities and towns, if you’re planning a trip to Kansai, definitely put one or two of these national parks on your itinerary!