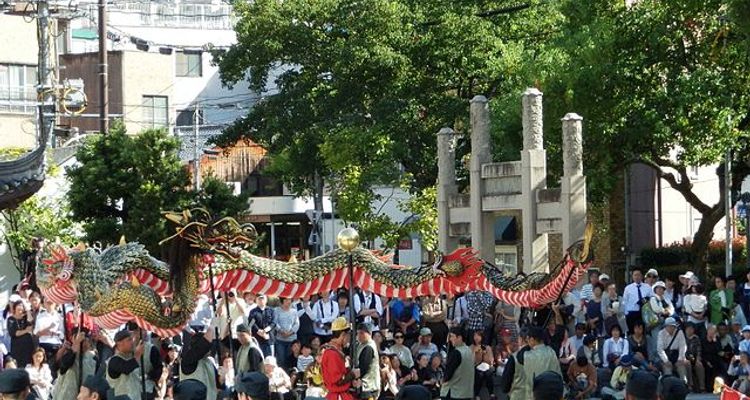 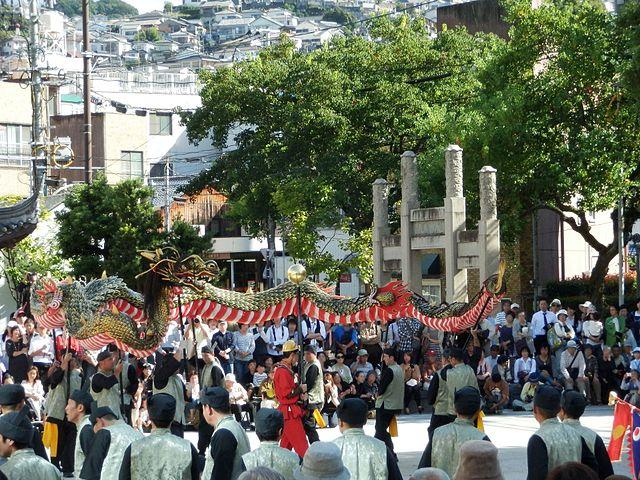 Held in Nagasaki City, Nagasaki Kunchi Festival is an autumn festival comprises of different cultural aspects from the Chinese and Dutch. This three-day festival is held annually from October 7 to October 9.

One of the three largest festivals of its kind in Japan, Nagasaki Kunchi Festival was first celebrated in 1634 as a festival to present offering to the deities in Suwa Shrine. The festival was incorporate with Noh drama presentation before a devastating fire in 1875 destroyed the city. Today, the festival is the place for the 59 nearby odori-cho (neigbourhoods) to showcase their own special traditional performances. All the 59 odori-cho is given a chance to perform once every 7 years, making this annual festival unique and lively. There are between five to seven odori-cho performing every year. As Nagasaki is a city incorporates with cultures from both China and the Netherland, Nagasaki Kunchi Festival’s performances are heavily influenced by both cultures. Some of the performances with the influences of these countries are such as Dragon Dance and Oranda Manzai. Performances are divided roughly into three types, with the first called Honodori that features traditional Japanese dances and such. The second, Hikimono, features things like the Kawafune and the Kujira-no-shiofuki, which is pulled around on wheels. Lastly, Katsugimono features the Kokkodesho and Dragon Dance. There are many other performances such as the Lion Dance as well. Performances are also staged at a few other locations across the city, for which no tickets are available. Among them is the plaza of Nagasaki Station, where all groups have scheduled appearances on October 7th. Get there in advance to reserve a good spot either on the ground level or from the elevated walkway. Moreover, the attractions prepared by the Odori-cho include dazzling floats shaped like river barges or Chinese boats on wheels. When the decorations, some over 100 kg and serving as placards of the town, arrive at the head of the parade, the spectators lining the streets call out "Come quickly, we're waiting!," or "Turn around in a big circle!"

Visitors are also able to follow the parades which included colourful floats and beautiful dancers along the way. The festival’s name is derived from ku-nichi, which means the 9th day. It represents the ninth day of the ninth month according to the lunar calendar.