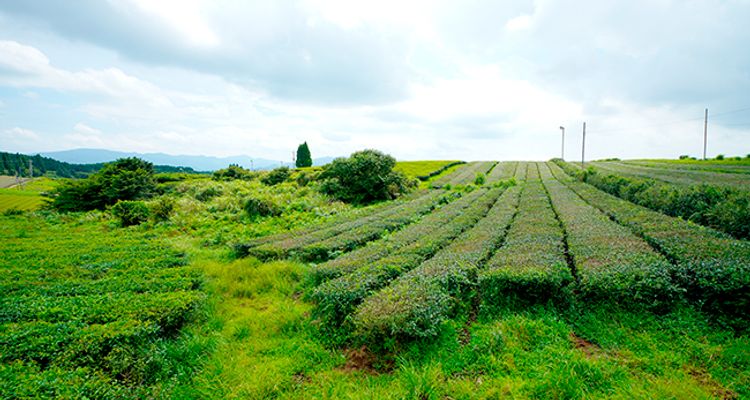 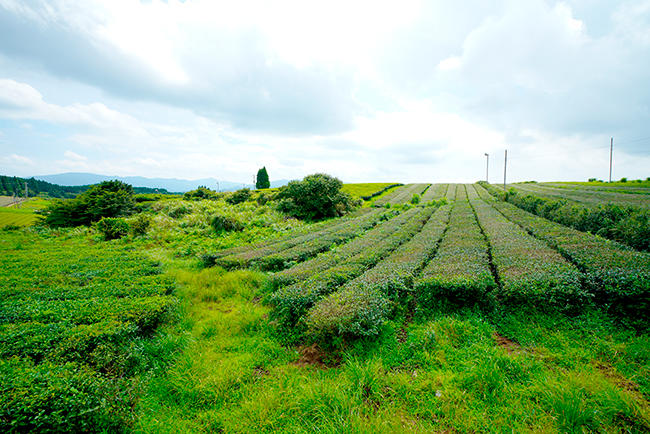 Minamata Tea: Eco-Friendly Green and Black Teas Grown in the "Tea Field in the Sky"

On the border between the Kumamoto and Kagoshima prefectures, green tea plantations spread out over a 600-meter-tall plateau. Overlooking Shimabara's Mount Uzen in the west and Kagoshima's Kirishima region in the south, this is the birthplace of Minamata tea. The area is called Ishitobi, or "flying stones", after the fierce winds said to be strong enough to send rocks flying here. Even within Japan, this area is unusual for the native tea varieties grown here that were first cultivated around 90 years ago. This writer visited this tea plantation to find out about the chemical-free agricultural methods adopted here, as well as the processing methods that create green and Japanese black tea from the leaves after harvest.

There are many leading tea-producing areas within Kyushu, and the teas grown here are typically named after the areas they are grown in. Chiran tea, grown in Kagoshima Prefecture, boasts the second highest yield in Japan. Other notable teas grown in the region include Yame tea (Fukuoka Prefecture), Miyazaki tea (Miyazaki Prefecture), and Ureshino tea (Saga Prefecture). This article will introduce Minamata tea, which has a different history to these other regions. The native species of tea plants here are grown using unique agricultural methods.

Ishitobi is located around 30 minutes by car from Minamata. This area is one of the places Minamata tea is grown, and in fact is said to be the birthplace of this tea. In the Taisho Era around 90 years ago, Masanosuke Nonen, who studied agriculture in America, began cultivating the land and planting tea seeds here. It's said that these large-scale agricultural activities here anticipated the coming move towards the mechanization of farming. During World War II, the tea fields temporarily fell to ruin. However, around 10 years after the war, some 60 families came to settle in the area. They re-cultivated the neglected farmland and once again began farming the native tea plants here.

Shigeru Amano standing in the birthplace of Minamata tea.

Shigeru Amano of Amano Seichaen Farm has been growing tea since his father's generation. His father was one of the people who settled in the area after the war, and today Amano works in the production, processing, and sale of the around 6 tons of green and black tea grown on the 6-hectare farm.

The plantation that Amano showed us around felt wide open, with an uninterrupted view as far as the eye could see. This plantation is sometimes called the "tea field in the sky". This whole area is cool highland terrain, 600 meters in altitude, and the soil is volcanic ash.

It has been 40 years since Amano, who took over the farm from his father after graduating high school, started growing tea without the use of agricultural chemicals. The background to this decision was the presence of Minamata disease in the area. This disease is a neurological disorder caused by severe mercury poisoning, and was brought about by an ecological disaster that contaminated food in the area. Since the farm was located in the Minamata area, the disease had an effect on sales, even for tea like this grown deep in the mountains.

"There was a period where people refused to buy not just tea, but Minamata’s produce in general," Amano said. He told us that while he considered changing to an easy-growing tea variety and moving away from the native tea plants, all of which have individual characteristics that make them more difficult to grow, he was not able to raise capital to buy the seedlings. However, this ended up having an unexpected outcome. The farm became known for growing native species of tea that are rare to find, even within Japan.

"I kept growing and processing the tea, but people wouldn't buy it simply because it came from Minamata," Amano recalled. "It felt pointless, but then I started thinking that I had to face up to the circumstances I was in.” Around this time, Amano had come across a book about natural farming methods written by Masanobu Fukuoka, and decided to take on chemical-free farming methods himself. "Living in Minamata, I saw the effects of Minamata disease. It was why I felt drawn to creating a safe product that people can drink with peace of mind." Since he uses no herbicides, the farm is busy with daily weeding from spring to autumn. "The summers are hot, but we do get breezes here," he said with a smile that spoke to his strong determination to continue farming without agricultural chemicals.

Today, the farm grows ten varieties of tea, with a focus on Yabukita and Sayama-kaori varieties.

The native species of tea have a mellow flavor and a fresh aftertaste.

Tea farmers process the tea leaves they grow and harvest to turn them into tea that they sell.  Amano told us about his decision to start making Japanese black tea. "Insects tend to cause second-grade tea to turn brown," he said. “It seemed like a waste, because even though they're grown without chemicals, brown leaves lose their value as green tea. So, I decided to turn them into Japanese-style black tea instead."

This way of thinking that drew him to making the most of what he had on hand also led him to take on the challenge of making black tea from different varieties of green tea. Today, this Japanese black tea made from green tea varieties makes up about 80% of the tea the farm produces. The finished tea has a very original, impressive flavor, thanks to the heating and original fermentation method used to process the leaves.

To brew an easy-to-drink tea with no bitterness, use a little less tea leaves and seep for five minutes.

In addition to their standard tea, the farm is producing a range of new products, including a herb blend.

You'll be welcomed by Michiyo Amano to this cafe where you can order Japanese black tea and cake sets. Amano Seichaen tea is also available for purchase here.