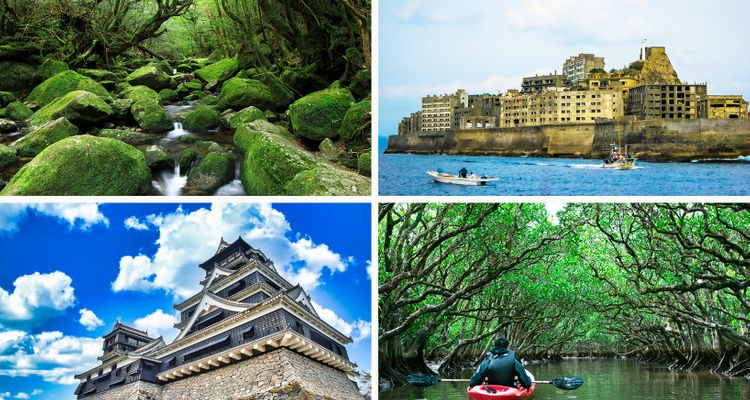 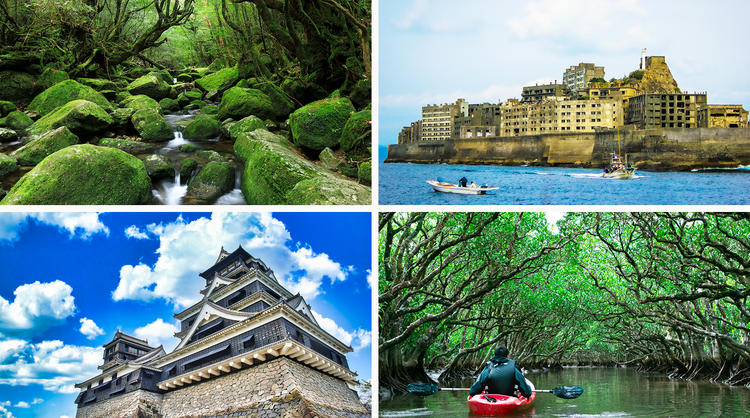 Explore the Hidden Wonders of Kyushu With These Online Tours! [Updated for 2021]

Kyushu is one of Japan’s four main islands, located at the southwestern edge of Japan. It boasts more tourist destinations and possible experiences than can fit in an article. The famous gourmet city of Fukuoka; the Aso Caldera, among the largest in the world; the natural World Heritage Site of Yakushima Island in Kagoshima, where you can find ancient natural features like a 7,200 year old Japanese cedar; five locations from the “Sites of Japan’s Meiji Industrial Revolution” World Heritage Site; Takachiho in Miyazaki Prefecture, which plays a central role in Japanese mythology… The list goes on and on. Now, you can experience these magnificent locations from up close without leaving your own home! Here are five tours of Kyushu spots that you can access online.

Fukutsu is located in the northern part of Fukuoka Prefecture, in northern Kyushu. You cannot visit this area without stopping by the popular Miyajidake Shrine—home to the “Oshimenawa” (2.6 m in diameter, 11 m long, 3 tons in weight), the largest “shimenawa” (sacred rope) in Japan, and a rare spectacle called the “Path of Light” (second picture above) that can only been seen twice a year at the end of February and October, where the sun sets perfectly in line with the path running up to the shrine. Fukutsu is also known as a producer of the prized “Amaou” strawberries that are renowned for their sweetness and only grown in Fukuoka.

During this online tour, you will virtually board a bus and travel following the planner. The first stop is Miyajidake Shrine, where you will visit the shrine and see the awe-inspiring sight of the Oshimenawa (first picture above), as well as the aforementioned Path of Light. Afterwards, you will get to pick some Amaou strawberries, only grown in Fukuoka, and a strawberry farmer will teach you how to make a strawberry sandwich!

Asakura is at the southern end of Fukuoka, in the north of Kyushu. There you can find scoop wheels that are still in use (1st picture above) and an abundance of fresh water. Cormorant fishermen are still at work today on the Chikugo River as well (2nd picture above). It’s an area where you can still experience the natural, pastoral Japan of the olden days.

Yamaga is located in the north of Kumamoto Prefecture in west-central Kyushu. It’s an area with a unique history and culture. There’s the vividly colorful Yachiyoza Theater (1st picture above); the Yamaga Lantern Festival, a quintessential summer scene where 1,000 women dance at Yamaga Onsen with gold and silver paper lanterns balanced on their heads; and the accompanying Yamaga Hyakka Hyakusai Festival (2nd picture above), when the whole town is bedazzled with lanterns and Japanese umbrellas.

Dazaifu, in the southern portion of Fukuoka in northern Kyushu. At its center stands the Dazaifu Tenmangu shrine, with some 1,100 years of history. The temple grounds are filled with ancient trees, most notably a giant camphor over 1,500 years old. One of the most famous tourist spots in Kyushu with some 10 million visitors per year, Dazaifu Tenmangu is also the head shrine of the 12,000 shrines throughout Japan dedicated to the god of learning.

Situated in the southern part of Fukuoka Prefecture in northern Kyushu, Yame is known as the production site for a type of Japanese tea called "Yame-cha." The broad expanses of tea fields make for a breathtaking sight. Another more obscure spot, popular among those who know it, is Rengan-ji Temple, which stands amidst an unusual rock formation. Yame-cha is said to have originated from here.

Aso is in the eastern end of the west-central prefecture of Kumamoto, placing it close to the exact center of Kyushu. One thing you absolutely must see while you’re there is the Aso Caldera, among the largest in the world. It is an active volcano, meaning that there is volcanic activity taking place even now! (As of January 27, 2020, it is possible to approach the volcano, although there are times when the wind direction makes such visits impossible.)

Another popular destination is the Kusa-senri grasslands, where “kusa” means grass and “senri” literally means 1,000 leagues, although here it is used to mean “seemingly endless.”

G. Ohara
I am one of tsunagu Japan's main editors.