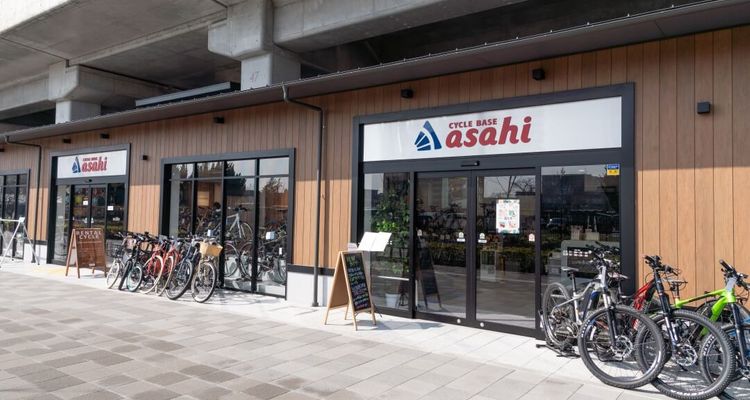 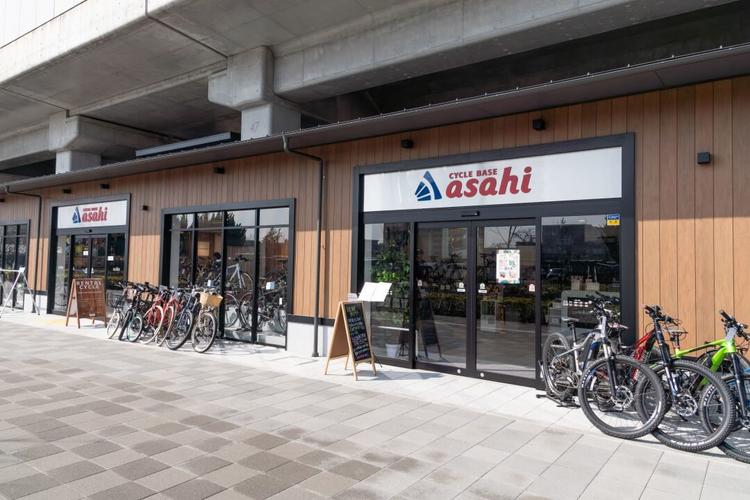 Nishikyo Ward in the southwest of Kyoto is best known for its Arashiyama area, but it's also the site of a number of lesser-known gems. These include the beautiful bamboo forests in the Rakusai Bamboo Park, the Oharano Shrine—which is well known for its autumn leaves—and a Western-style patisserie adored by locals. In this article, we’ll be experiencing all of the sights of the area on an electric sports bike (a sports bike with electric assistance) and introducing a shop where you can rent one out! Take a break from the hustle and bustle of downtown Kyoto and feel the wind in your hair as you tour some lovely destinations in Nishikyo.

Rent an Electric Sports Bike at a Specialty Store

Let’s set off on a cycling tour of the Nishikyo area!

Located under the railroad tracks by the west gate of Rakusaiguchi Station (Hankyu Kyoto Line), the TauT Rakusaiguchi shopping center features 13 stores, and has gathered much attention since its opening in October 2018. Before setting off on your bike trip, make sure to stop by here and pick up a copy of the area's Quest Map! (Only available in Japanese.)

In this shopping center you can also find Cycle Base Asahi, a store that rents out a variety of vehicles from tricycles to electric bikes. It’s well known for specializing in electric sport bikes.

In addition to the bike itself, you can also rent out gloves and helmets, so you can simply stroll in without bringing anything along. An employee will also explain everything you need to know about riding your electric sports bike.

The Cycling Tour allows you to see all the famous attractions of the Rakusai (West Kyoto) area, including bamboo forests and the Arashiyama scenery at night. It's also a chance to get a taste of the fun of electric sports bikes. An experienced guide will accompany you throughout the tour and insurance is also provided, so novices and tourists are welcome!

Note: Employees and guides can show you around using basic English. If you have a coordinator or interpreter, you can opt for the full Japanese tour instead.

“Electric sports bikes are different from normal electric bikes, as they were developed for sports," said Mr. Taniguchi, the store manager of Cycle Base Asahi in Rakusaiguchi. "So, even if you’re not super confident in your physical abilities, you’ll still be able to ride pretty far and get some light exercise while you see the sights. Electric sports bikes can use the area’s many narrow byroads, too.”

“Arashiyama at night and the area’s temples and shrines are must-sees, but the area’s natural scenery is also lovely to see on a bike. I definitely recommend the experience!” added Mr. Taniguchi with a smile.

Riding boldly through the bamboo forests on a bike is a refreshing, pleasant experience. The Rakusai Bamboo Forest area isn't crowded, and the sunlight gently filtering through the trees makes for the perfect cycling route!

A Museum of Bamboo History in Kyoto’s Bamboo Capital

Next, we visited the Museum of Bamboo in the Kyoto Rakusai Bamboo Park.

This museum, known internationally as the "Rakusai Bamboo Park", opened in 1981. Bamboo is vital to Japan’s lifestyle and industry, not to mention its culture and art, but few know very much about the ecology of this plant. The museum contains exhibits about this material's quality, beauty, as well as its historical and cultural importance.

In the display room, you can find examples of historical objects made from bamboo, including a bamboo drainpipe excavated from Nagaoka-kyo, the capital of Japan from 794 - 794, as well as one of Edison’s light bulbs.

We spoke with the park’s resident agricultural expert, Professor Watanabe, who explained: “Every summer we hold workshops for children (only in Japanese). After showing some clips where we explain the plant’s biology and uses, children learn about bamboo in a fun and hands-on way through making toys and warbler flutes out of bamboo."

The number of tourists who visit the museum grows by the year. As there is no bamboo native to Europe, European tourists in particular are fascinated by the exhibits and the architecture of the Japanese bamboo tea room on display. This area is also where the local favorite, edible Kyo-Takenoko bamboo shoots are produced.

“Rakusai is the bamboo centre of Kyoto. We hope to showcase the importance and brilliance of bamboo and to more and more people!” said Professor Watanabe, speaking as someone who truly loves bamboo.

An International Tradition Transported to Rakusai

Takashima, the patisserie’s owner and master baker, trained in Western-style baking for three years in Switzerland, two years in France, and two years in Canada.

Takashima then returned and opened his own bakery, Madame Choux Cream, in November 1988. The bakery, where they faithfully continue Swiss tradition, is well loved by discerning local palettes. This year marks its 31st year of operation.

The bakery is now operated by Masayuki, the second generation of Western-style pastry chefs in the family. The bakery combines techniques from the owner’s beloved France, Switzerland, and Canada, while at the same time including local ingredients, such as Oharano blueberries and Oe persimmons, to produce original creations.

The bakery’s signature item, the choux à la crème, is produced with a mixture of fresh cream and custard cream in a classically soft pastry shell. Masayuki, the second-generation chef, is confident that customers of all generations will continue to love the taste of tradition.

Madame Choux Cream, a bakery filled with joy and laughter from its cafe patrons on weekends. In front of it, French and Swiss national flags flutter proudly, signaling to all of this iconic family-owned bakery's continued prescence in Rakusei.

Our last stop is the Oharano Shrine. An excellent time to step away from your hectic life and enjoy a few moments in peace.

The Oharano Shrine was built in 784, when the area became the imperial capital known as Nagaoka-kyo. It also bears the name “Kyo-kasuga”, as it was the site of worship for the god Kasuga, patron god of the Fujiwara clan who were close to the imperial family. In 850, an impressive shrine building was constructed, and it became custom for the Fujiwara to pray at this shrine every time a daughter was born so that she may marry into the imperial family. In particular, the procession that accompanied Emperor Shoshi - daughter of Fujiwara no Michinaga, and for whom The Tale of Genji's author Murasaki Shikibu served as lady-in-waiting - was said to have been so beautiful that many continued to refer to it for centuries to come.

We spoke with Sugihara from the shrine. They noted that the Oharano Shrine bore great significance as the site of worship for the god of politics, safe passage, and wisdom, as well as a protector for women seeking good marriages, and as a result appeared in many great historical works of literature, including the Rikkokushi (Six National Histories, dating from the 8th and 9th centuries), the Okagami (The Great Mirror, an ancient history of this period), and the Tale of Genji. Sugihara added that Murasaki Shikibu loved the shrine and worshipped it as her patron god. In her novel, The Tale of Genji, she depicts the beautiful and extravagant procession that accompanied the fictional Emperor Reizeitei to this shrine.

Some Peaceful Moments From the Heian Era

The shrine has been well-known since the Heian Period (794 - 1185) for its autumn foliage. In fact, an 11th-century poem by Fujiwara no Koreie makes reference to its beauty. During the autumn, the sando (the road approaching the shrine) becomes a “tunnel” cocooned on all sides by autumn leaves, drawing large crowds. Conversely, in the spring, the shrine is well known for its rare variety of cherry blossoms that bloom for only two or three days before falling.

"While Kyoto has become a hub for international tourists, the Oharano Shrine remains off the beaten path," says Sugihara. It’s a great location to take a break from life and enjoy some moments of peace.

A Perfect Photo Spot in a Bamboo Forest

Exit the Oharano Shrine and go along the Kitasando to the north, and you’ll find the Takehogaki Path, a spot beautifully lined with bamboo fences. It’s a very quiet location, perfect for taking photos of the bamboo forest.

Another option is to head from Oharano Shrine towards Shojiji, and you’ll come across another beautiful spot. You’ll feel as though you’ve suddenly found yourself in the middle of a forest.

That’s our cycling tour of Nishikyo! We’ve introduced a variety of spots that you can explore by bike, covering a total of 15km. It'll take about four hours at a leisurely pace. There are some gentle inclines on the way, but these are easy on an electric sports bike. We definitely recommend that you spend some time relaxing in this corner of Kyoto surrounded by pastoral scenery and bamboo forests.

The images and content of this article were taken with permission from "Hidden Gems of KYOTO Project" (Japanese page).