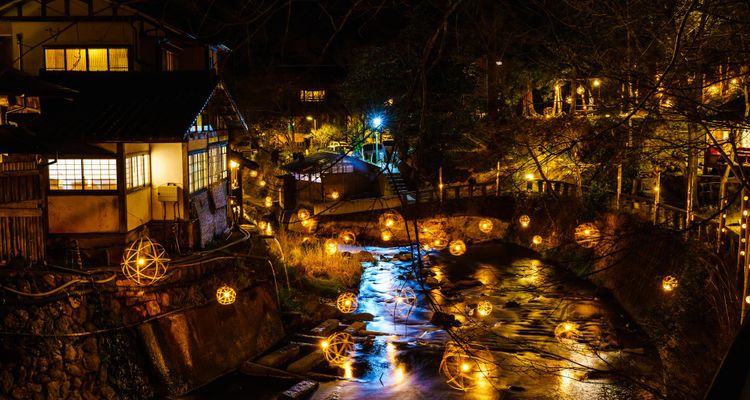 Kurokawa Onsen - Hop Through the 30 Inns of This Hot Spring Paradise!

With an ever-growing worldwide fanbase, Kurokawa Onsen in Kumamoto Prefecture is one of Japan’s most distinguished hot spring towns. Kurokawa’s main draw is its "rotenburo" (open-air hot springs), which are seamlessly integrated into the surrounding nature. With baths as deep as 150 cm, mystical pools hidden inside caves, and traditional ryokan (Japanese inns) boasting up to 7 different water qualities, the town brims with creative and unique outdoor baths, making the most of its natural wonder. Best of all, those with an onsen-hopping pass will be free to tour and soak in many of Kurokawa’s rotenburo, as if it were all in one hotel! Warm your body and soul and completely unwind in the relaxing ambiance and heavenly waters of Kurokawa Onsen.

Kurokawa Onsen, located in Kumamoto Prefecture, is one of Japan’s most renowned onsen (hot spring) towns. Recognized for its beauty across the world, it received 2 stars in the Michelin Green Guide Japan, which is unprecedented for a hot spring town. After being designated as a People's Recreation Onsen in 1964, it exploded into a short-lived popularity that eventually dwindled. Believing that visitors would not come unless the baths themselves had charm, the owner of the Shinmeikan ryokan began a campaign to promote the town through open-air baths, complemented by warm countryside hospitality. Soon, neighboring ryokan also began utilizing the encompassing greenery to construct their own rotenburo, eventually transforming Kurokawa into a thriving resort town through word of mouth alone.

Kurokawa Onsen is often called the “one-ryokan onsen town.” This is because the streets feel as if they are all connected, making the entire community feel like one big hotel. In fact, customers can even purchase an onsen-hopping pass, which allows access to 28 different rotenburo throughout the town. Such a convenient service, especially one with so many participating ryokan and open so late, is a rarity even in Japan. (Visitors can bathe in up to three onsen per pass.)

When Is the Best Time to Visit?

While Kurokawa Onsen boasts year-round beauty, there are certain periods where the town truly comes alive! One of these is the “Yuakari Light Up,” whereby the entire town is delicately illuminated. Beautiful orbs of light and 2-meter-tall cylindrical lanterns melt into the surrounding nature, guiding visitors through the otherworldly promenades. After your luxurious bath, wandering aimlessly throughout the glimmering pathways is surely the definition of bliss. This light-up event is held annually, with this year’s rendition running between December 19, 2020 until May 30, 2021 from sundown until 10:00 pm (the end date may change due to the impact of COVID-19; check the official website for details).

This article will introduce and explore 5 standout ryokan in Kurokawa Onsen known for their distinctive character and charm. We’ve done all the research for you, so once travel returns to normal, you’ll have your next Japan onsen adventure all lined up!

Yama no Yado Shinmeikan - The Founding Father of Kurokawa, Featuring a Cave Bath!

Tetsuya Goto, the 3rd-generation owner of Yama no Yado Shinmeikan, is lovingly referred to as the father of Kurokawa Onsen and officially recognised by Japan as part of the “Sightseeing Charisma” selection (a collection of 100 distinctive and creative contributors to Japanese sightseeing selected to promote tourism). Once Kurokawa Onsen’s initial popularity waned, Goto pioneered the transformation of the town into a beloved national treasure through Shinmeikan’s cave and rotenburo baths, which were both highly unusual at the time. Believing that exceptional baths attract customers, he toiled away alone for three and a half years on the 2-meter-wide, 30-meter-deep cave, which he filled with hot spring water and turned into an onsen.

Afterwards, he directed his attention to the rotenburo bath, bringing in trees from the mountains to allow guests the opportunity to bathe within nature. This ambitious venture quickly drew the attention of female visitors in particular, and soon enough the surrounding ryokan began to develop their own rotenburo, each aiming to protect and celebrate the encompassing greenery.

Shinmeikan’s onsen is a sodium-chloride sulfate hot spring that will thoroughly moisturize your skin, help heal wounds, and alleviate ailments, including circulation issues, cold sensitivity, depressive symptoms, dry skin, and more. To this day, visitors flock to the Iwato Bath, the oldest open-air bath in Shinmeikan's long history, along with its still-distinctive cave and hole baths.

With a stellar location in the center of town, unforgettable outdoor onsen, and quaint traditional fireplace cooking, Shinmeikan is undoubtedly the quintessential Kurokawa Onsen experience!

Ryokan Sanga - A Hidden Gem Deep in the Forest!

Ryokan Sanga’s origins are intertwined with the mysterious waters of Kusuri-yu, a spring tucked away deep in the mountains of Kurokawa. Known to possess a potent healing effect on cuts and rashes, holes were dug to bring this once elusive water down to the town to enjoy. The newly unearthed waters of Kusuri-yu were named “Yakushi no Yu,” in reference to the Buddhist god of healing, and are still used today as a 100% direct-source free-flowing onsen. It is known to help alleviate a wide range of ailments, including high blood pressure, cuts and wounds, and diabetes.

The ryokan also boasts an additional direct-source onsen, “Bihada no Yu,” which is recommended for those suffering from poor blood flow, chronic skin conditions, cuts, burns, and more.

While use of the Yakushi no Yu bath is limited to overnight guests, those dropping by are free to bathe in the Moyai no Yu and Shiki no Yu baths.

Surrounded by ever-changing greenery and with no other buildings in sight, the gentle murmuring of the nearby streams will lull you into a deep state of relaxation. After your bath, head to the Tsukimidai moon-viewing platform overlooking the river to gaze at the stunning night sky. Accompanied by a cup of Japanese sake, it doesn’t get more exquisite than this! You can also spot fireflies in the area between June and July.

Meals include meat and fish-free vegetarian dishes, along with vegan-friendly options completely free from dashi soup stock, egg, dairy, and all other animal products. Ryokan Sanga is a place where all are welcome to relish in their own lifestyles!

Each room is named after a tree planted around the ryokan. With such a seamless blend between nature and luxury, guests can unwind and settle into their own routines alongside the nourishing wilderness of Kumamoto.

Celebrating its 50th anniversary, Yumerindo is a traditional Japanese-style wooden ryokan sitting at the entrance to Kurokawa Onsen. The Rindo no Yu onsen is a sodium sulfate, chloride, and saline hot spring that was said to once attract wounded animals who, after soaking in the water, quickly healed and returned to the mountains. The water is gentle on the skin and is good against rheumatic diseases, as well as a host of skin diseases. You can also drink the water, which combats constipation, motor impairments, and more.

Dinner is packed with highland vegetables, which boast a succulent sweetness born from the harsh rising and falling of temperatures prone to the plateau. A blend of Japanese and Western dishes, both eyes and taste buds alike will be enveloped in the bounties of Kurokawa. Guest windows overlook the gentle Tanoharu River alongside an elegant Japanese garden adorned with a water wheel.

The “rindo” part of Yumerindo is the name of a flower that also means “pure grace,” an apt description for such a heavenly slice of beauty! Through the power of flawless Japanese hospitality, daily stresses will quickly melt into nothingness.

inn NOSHIYU is a small-scale hotel that opened in Kurokawa Onsen in January 2020. An unusual sight in the neighbourhood, inn NOSHIYU is modeled on a bed & breakfast with relaxing Western-style rooms. Furthermore, the maximum capacity each day is just 4 groups, allowing guests to relish unspoiled privacy and quiet. Aimed at groups of 1-2 people, and at a very reasonable price when compared with nearby accommodations, it provides a welcome alternative for the younger generation or solo travelers who find the old ryokan style intimidating.

While the hotel only has one reservable private indoor onsen, overnight guests can also use the bath in the neighboring "Oyado Noshiyu" ryokan, a part of the same organization, for free. The Noshiyu onsen was created by the staff of inn NOSHIYU, who slowly labored to dig up the ground, plant trees, and carry stones until the onsen was completed. Surrounded by luscious groves and cleverly built utilizing the shape of the encompassing nature, the additional “Notenburo” gender-seperated rotenburo is also worth checking out!

At its heart, inn NOSHIYU is all about leisure. From the nurturing warmth of the natural wooden architecture, the soothing soundtrack playing in the lounge, and the quaint Japanese-style fireplace in the study, every inch is painstakingly designed to encourage guests to let go and discover peace.

Yamabiko Ryokan - Luxury For The Whole Family (Children and Dogs, Too)!

Stepping foot into the lobby, you’ll immediately be greeted by Yamabiko Ryokan’s beloved mascot, Ume the dog (the second generation). Many are often surprised to learn that this elegant ryokan has not only specialized dog rooms with a cage, but a dog-friendly onsen too! Non-guests are also free to use this onsen, which is equipped with shampoo and hairdryers, for a modest fee of just 300 yen. Moreover, the ryokan boasts Kyushu’s first ever authorized child-friendly rooms, making it the perfect choice for those with kids in tow. These rooms are equipped with a mini-kitchen where parents can clean baby bottles, warm up baby food, and perform other parental duties with ease. There are no guest rooms below, so restless baby noises aren’t an issue!

The onsen is made from a carbonated sodium-chloride salt spring and sulfate spring, making it good against burns, cuts, and muscle pain. As it has two different water types, the so-called "Double Bihada no Yu" ("bath for doubly beautiful skin") is known to add lustre to skin and is particularly popular with women. The building was constructed to harmonize with nature, which is best experienced in the outdoor Sennin-buro made from the surrounding trees and boulders. There are also rock baths, baths made from hinoki cypress wood, and a standing bath with a depth of 150 cm. With such a fantastic variety, you’ll be glad to know guests can use them all for free day and night!

The unmatched peace of mind that comes with an onsen holiday is not just for adults! Children and dogs can join the fun at Yamabiko Ryokan!

How to Get to Kurokawa Onsen

From Kumamoto Station: After a 40-minute ride to JR Higo-Ozu Station, take the "Yamabiko-go" bus (Sanko Bus) to Aso Station (50 minutes). From there, take the Tsuetate Line (Sanko Bus) for another 50 minutes to the Minami-Oguni-Yakuba-Mae bus stop. From there, it’s a 10-minute drive via taxi or courtesy car to Kurokawa Onsen.

From Hakata Station: Take a 40-minute train ride to Kumamoto Station, and then follow the above guide.

For many, visiting a secluded onsen town in the midst of a dense forest is the dream Japan vacation. With an unrivalled assortment of stunning outdoor rotenburo onsen, this dream awaits at Kurokawa Onsen. The more you explore, the more you'll uncover hidden secrets and intricate details locked away in this isolated slice of paradise. Once travel resumes, adventure to Kumamoto and check yourself into the hot spring network of Kurokawa to wash away all the stress and fatigue of the past year!