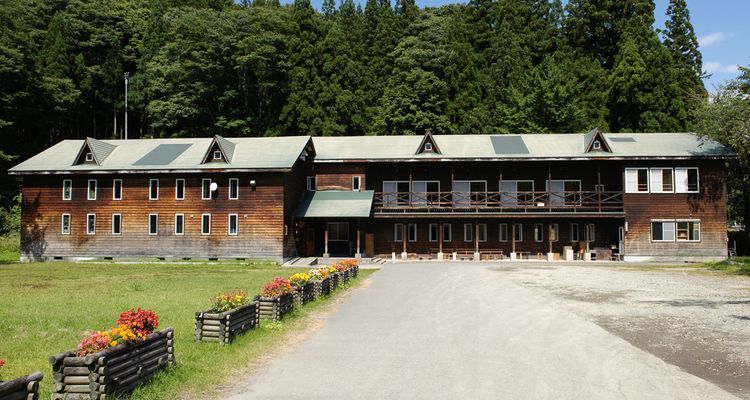 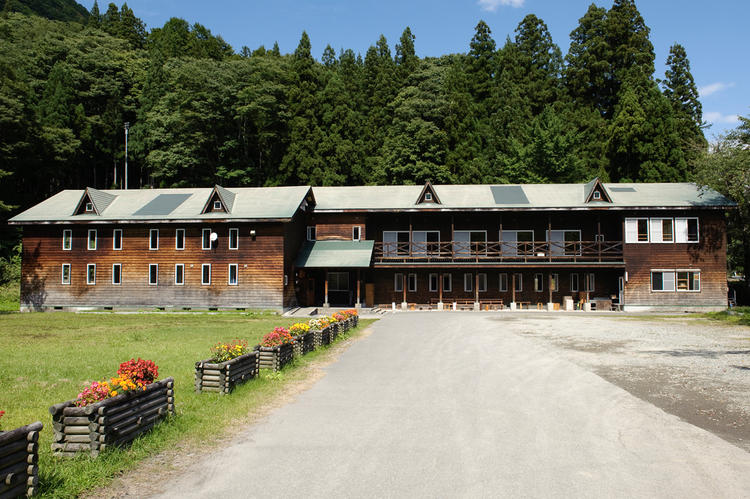 Japan’s dwindling population means that small, rural towns often struggle to stay afloat. Tsunan, in inland Niigata Prefecture, was one such town, forced to close shops, schools, and more in the face of disappearing residents. To combat this, locals tirelessly transformed one abandoned school into “Katakuri House,” an offbeat accommodation facility inviting guests to spend the night deep in outback Japan. Filled with curiosity, we set out to Tsunan to see first-hand just how Katakuri House and other local initiatives are revitalizing the region.

Katakuri House - Nestled in the Deep Wilderness of Akiyamago

On the border of Niigata and Nagano sits Akiyamago, a collection of tiny settlements belonging to both the towns of Tsunan and Sakae. Designated as one of Japan’s “100 Best Secluded Regions,” Akiyamago is scattered across a vast gorge, famed for fiery foliage peaking in late October. The isolation of Akiyamago is doubled during the winter, illustrated by a marker claiming “Japan’s highest snowfall” at the nearby Morimiyanohara Station, recording a staggering depth of 7.85 meters in 1945.

The centerpiece of Akiyamago is Katakuri House, a quirky accommodation facility housed inside the renovated former “Ketto School,” a branch of the Tsunan Town Kiyotsu Elementary School. Despite the town’s isolation excluding it from compulsory education, residents of Akiyamago worked hard to privately fund Ketto School to grant their children a prosperous future, with village leaders doubling as teachers. The school was initially founded in a private home in 1884, before being rebuilt in its current location in 1932, diligently serving the community for over 100 years.

After hosting several generations of graduates, a lack of new students forced Ketto School to close its doors in 1992. Despite no longer having a purpose, locals couldn’t bear to see this beloved institution demolished or left to rot, and in 1993, it was revamped as “Katakuri House,” opening a new chapter as accommodation for visitors to Akiyamago and the greater Tsunan area.

While the end of Ketto School may seem disheartening, many of its former students left Akiyamago in search of new opportunities empowered by their education, fulfilling their parents’ wishes for a successful life. The school stands proud as a testament to this tiny village that strove to better itself, now continuing its legacy as a hub for visitors to learn and experience the local Akiyamago way of life.

Sleeping in a Japanese School: Our Night at Katakuri House

After a seemingly endless drive up a steep, winding mountain with only our headlights to guide us, we arrived at Katakuri House around 9:00 pm on a frosty, pitch-black mid-autumn night. Immediately, the friendly staff came outside to greet us, providing a brief tour of the facility before showing us to our rooms.

Being an abandoned school hidden deep in the woods, we felt justified in being a tad anxious at first. However, from the moment we stepped out of the car, our minds were put at ease. The warm, homely wooden exterior of Katakuri House blended seamlessly into the lush mountain forest, while the interior radiated a cozy, intimate atmosphere with plenty of privacy. Walking between classrooms, we could easily imagine children racing down the halls, making us feel oddly nostalgic despite being worlds apart from our own childhoods.

Katakuri House has seven guest rooms, each repurposed from classrooms and furnished with traditional straw mat flooring and futon beds. While simple, they are snug and secure, with enough space for families and groups to stretch out. Despite the thin walls doing little to keep the outside cold at bay, space heaters and air-conditioners were placed evenly throughout the facility, including rooms, ensuring we were always warm.

While too chilly for us, those seeking a closer encounter with nature can also camp on the school sports grounds, provided you bring camping gear. If you don’t have your own stuff, Katakuri House also has separate all-inclusive “glamping” plans boasting luxury tents with beds and meals.

While we expected the accommodation to be the highlight, dinner stole the show. The staff at Katakuri House have just as much talent in the kitchen as they do as hosts, treating us to a smorgaboard of delicacies reflecting the locality and season.

Many of the ingredients at Katakuri House are rarely seen elsewhere, particularly the wild vegetables, which are painstakingly foraged through the dense neighborhood mountains. Around 30 species of wild vegetable are harvested by staff between late winter and midsummer, including “fukinoto,” an edible flower of the giant butterbur, along with ostrich fern, wasabi leaves, royal fern, and the incredibly rare “buna moyashi,” which are sprouts of the Japanese beech tree that only appear under perfect conditions.

Once the season for wild vegetables wraps up, the staff turn their attention towards collecting chestnuts, walnuts, ginkgo nuts, berries, mushrooms, and more. What they can’t find, they acquire from local farmers or grow themselves, such as specialities like Tsunan’s own “yukishita ninjin” carrot, and Niigata’s “koshihikari” rice, grown in the scenic Ishigakida Rice Terrace, just a brief walk away (pictured above).

Our own meal at Katakuri House was an amalgamation of all that is autumn, from the crimson ceramic plate to the seasonal morsels of ostrich fern, amandare mushroom, Japanese chestnut, kaki persimmon, and more. The staff beamed with pride as they talked us through the arrangement, bringing us on a gastronomic tour of the land and its inhabitants.

Katakuri House has plenty on offer to keep guests entertained. It doubles as part of the Echigo-Tsumari Art Field, currently presenting “Tsumari Sugoroku” by Hara Rintaro and Hara Yu in the wooden gymnasium, debuting in 2021. This gigantic, interactive artwork recreates a super-sized game of “sugoroku,” a Japanese board game similar to Snakes and Ladders. It’s fashioned from an intricate arrangement of pieces representing the daily lives of former schoolchildren, including pianos, basketball hoops, dice, and more, and is worth taking the time to fully absorb. Those staying the night at Katakuri House can view Tsumari Sugoroku for free, while visitors can check it out for 300 yen or with the Echigo-Tsumari Art Triennale 2022 “Artworks Passport” (see prices below).

Katakuri House also boasts its own indoor hot spring, built in the former principal’s office. With the brisk autumn air intensified by the 600-meter-high terrain wearing us down, a soak in a warm, nourishing hot spring is exactly what we needed. The bath is drawn from Ketto Onsen, one of the rare “saline bitter springs,” said to make up just 4% of Japan’s hot spring resources. This exquisite natural water is claimed to improve blood flow to help prevent the buildup of fats and cholesterol on the artery walls, among other health benefits. Day-trippers can also enjoy the hot spring for 600 yen (adults), making it a popular stop-over for hikers to rejuvenate before heading home.

Rather than just simple accommodation, Katakuri House felt like a base of local culture, deftly guiding us through the character, history, and heritage of Ketto School, Akiyamago, and Tsunan as a whole. Despite the isolation, Katakuri House is also a well-located jumping off point into the surrounding bliss of Tsunan and neighboring Tokamachi, and the following day we were able to explore nearby sights like the Ryugakubo Water Spring (pictured above), the Beauty Forest, and Kiyotsu Gorge, which you can read about in this article.

Standing as a symbol of revival, the restoration of Katakuri House has since sparked a flurry of restorative action in Tsunan and surroundings, aiming to further imbue the region with fresh vigor.

Having lost around half of its residents since peaking in 1955, small towns like Tsunan are where the effects of Japan’s aging population and increasing urbanization appear most starkly. In 1994, one year after the establishment of Katakuri House, the Prefectural Governor of Niigata unveiled the “New Niigata Village Creation Plan,” which sought to interrupt this decline by highlighting the existing charms of localities. After the city of Tokamachi and town of Tsunan offered up the idea of tourism through art, this eventually culminated in the year 2000 with the “Echigo-Tsumari Art Triennale,” a large-scale outdoor art festival stretching across the six former towns and villages of Tokamachi, Matsunoyama, Nakasato, Matsudai, Kawanishi, and Tsunan.

With the 2018 iteration drawing in a staggering 540,000 visitors, each Echigo-Tsumari Art Triennale has been a wild success, putting towns like Tsunan firmly on the map. Many of the festival artworks have blossomed into sightseeing attractions of their own, like the stunning “Tunnel of Light” (Kiyotsu Gorge Tunnel), now one of the most iconic sights of Niigata, along with James Turrell’s magnificent “House of Light,” which also serves as bookable accommodation like Katakuri House. It has also provided a network of support and promotion under the stylish “Echigo-Tsumari” brand, connecting formerly disjointed local projects like Katakuri House under an easily navigable, unified banner.

Alongside fostering art and culture, the Echigo-Tsumari Art Triennale likewise strives to restore buildings that have fallen into disuse and disarray. Through these efforts, around 100 such abandoned estates across rural Niigata have been reborn as art facilities and more, attracting sightseers to lesser-known neighborhoods well off the beaten path.

With long halls, spacious gyms, open grounds, and rows of classrooms, abandoned schools like Katakuri House make for wonderful art galleries. Echigo-Tsumari has hosted many works at former schools, including jaw-dropping exhibitions such as “The Last Class” presented in the Former Higashikawa Elementary School, which opened in 1875 and closed in 1997, and the “Hachi & Seizo Tashima Museum of Picture Book Art” in the Former Sanada Elementary School, closed in 2005.

Katakuri House itself became part of the Echigo-Tsumari Art Triennale in 2003 with “Melting Wall” by Honma Jun, a glass panel with naturally flowing water set up in the school’s old swimming pool, recreating the view one sees when looking up while diving. It now hosts “Tsumari Sugoroku,” which represents a childhood full of play and learning. Preparations are also underway to renovate Oakasawa Elementary, another abandoned school in Akiyamago that recently closed in 2021, into a museum showcasing local hunting culture and more.

Complementing the art itself, these former schools are an invaluable gateway into ordinary, day-to-day Japan. Circled by rustic, sleepy settlements, with only vast wilderness lying beyond, communities like these remain unaccustomed to tourism, granting authentic insight into rural life. After being lured in by the flashy artwork, it’s the villages and locals that capture the heart, encouraging one to dive in deeper and uncover something of their own.

The Echigo-Tsumari Art Triennale is currently being held from April 29 to November 13, 2022. It features dozens of new artworks, many again hosted in renovated properties. Noteworthy additions include “BankART Tsumari 2022,” an art gallery housed in a 100-year-old farmhouse, and “Cinema Kamigo” in the “Kamigo Clove Theater,” originally renovated from the Former Kamigo Junior High School, which closed in 2012. While many artworks are open year-round, the festival is a great opportunity to enjoy the best of the region under a single banner, and there are loads of special events and performances held throughout. Check out the festival calendar on the official website below and get planning!

Through our stay at Katakuri House and tour of Tsunan, we witnessed a forgotten slice of rural Japan striving to stay afloat in the modern world. Fighting against the greater trends of declining populations and more, innovations like this have injected fresh energy into the region, immersing guests in local life through offbeat, authentic encounters. For those seeking something different on their next trip to Japan, venturing out to Tsunan and surroundings and spending the night at Katakuri House promises a true adventure sure to inspire!