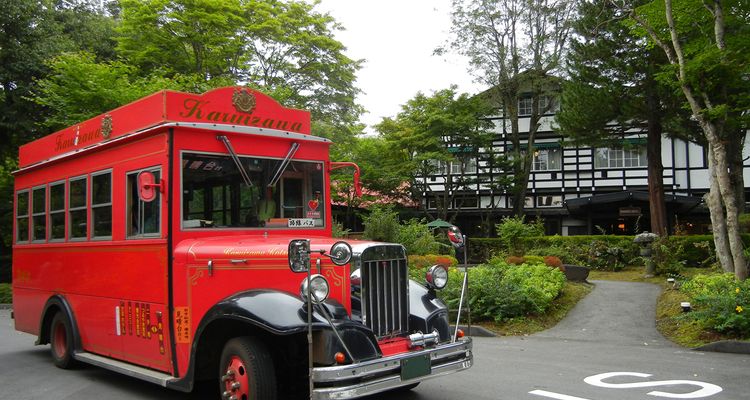 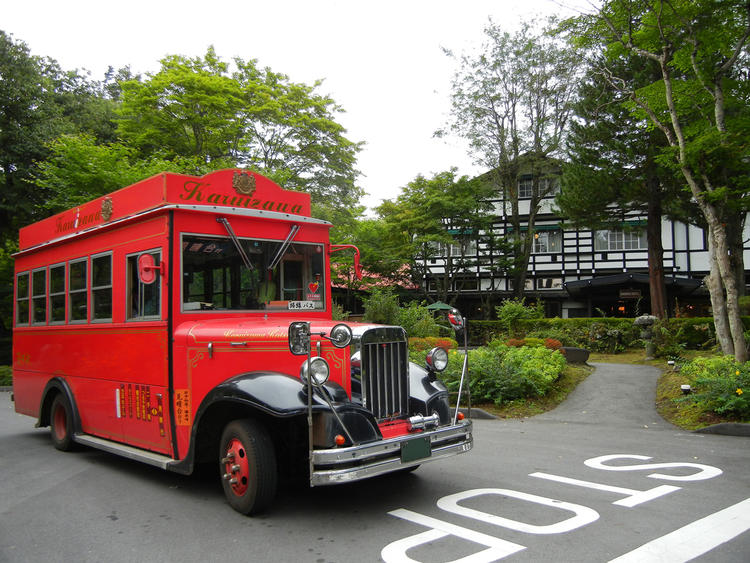 A Guide to Touring the Best Spots in Karuizawa by Bus

Karuizawa is a beautiful place surrounded by nature in Nagano Prefecture. Mountains, waterfalls, hot springs, historic buildings - this town has it all. Though it's home to many tourist attractions, traveling between each one takes time. That’s where buses come in, giving sightseers an easy way to go from spot to spot. Read on to learn more about Karuizawa’s best sightseeing spots, as well as the buses that’ll take you to them!

This shuttle bus departs from the number 2 stand at Karuizawa Station, North Exit, and takes a path through places like the shopping streets in the Kyu-Karuizawa Ginza area. It's useful for exploring the tourist spots near Karuizawa Station.

Kyu-Karuizawa Ginza is a shopping area near the North Exit of Karuizawa Station. A perfect place to find souvenirs, they have many stores selling anything from random goods to Karuizawa delicacies.

This bus line covers a wide area in Karuizawa, stopping by places like Kyu-Karuizawa and Lake Shiozawa. There's 2 routes to this bus, one heading east and south and the other towards Oiwake in the west.

Kumoba Pond is an artificial lake created by damming a creek. It has been described as a footprint of a giant due to its long, thin shape. Taking a walk around the lake will reveal amazing scenery, which is wonderfully green in the summer and fantastically red in the autumn.

Karuizawa Taliesin is a resort area with a museum and various entertainment facilities. It also has Lake Shiozawa on its premises, so you can gaze at all the flora and fauna surrounding the lake. Don't forget the restaurant and souvenir shop when you visit!

Created in the image of a British garden, Karuizawa Lake Garden is a great place to enjoy roses and many other flowers. They also sell seeds of the roses bred here in the garden, among other things.

This bus can get you to the Hoshino Resort area in around 6 minutes. It has many attractions under the Hoshino Resort group, along with hot springs, nature parks, and hotels. Can only be used by those with bookings for any of the facilities in the area.

Harunire Terrace is a department store that's home to souvenir shops, cafes, and so on. Its interesting feature is that it was built under the concept of a small village, meaning that it is actually made up of many smaller wooden buildings on a wooden deck, creating a space that's perfect for souvenir shopping or just taking a break.

About Tombo no Yu

Opened in 1914, this famous hot spring facility is equipped with many different baths, such as open-air baths or free-flowing indoor baths. A perfect place to stop over to rest and recharge!

Karuizawa Wild Bird Sanctuary is a national forest which is home to over 80 species of birds, Asian black bears, Japanese serows, and many other animals. They have tours here throughout the year to see the wildlife in their natural habitat.

The full name of this bus is "Kyu-Usuitoge Miharashidai Bus". Often affectionately referred to as the "Aka Bus" (Red Bus) by the locals due to its color, this bus passes through the quiet countryside of Karuizawa to arrive at the Usui Pass Observation Platform (Usuitoge Miharashidai).

Miharashidai is a lookout situated at 1,200 meters above sea level, and it sits right on the line separating Nagano and Gunma prefectures. From here, you can enjoy a majestic view of Mt. Asama and the surrounding mountains. There are also 2 popular stores here offering chikara-mochi, a treat that traditionally represents health and longevity.

This shrine is located right next to Miharashidai, and is also on the border between Gunma and Nagano prefectures. That makes this a very rare shrine, as it is owned by 2 separate religious corporations.

This bus takes people from Karuizawa Station to Kusatsu Onsen in Gunma Prefecture, passing through Kyu-Karuizawa and Kita-Karuizawa along the way. While it is popular since it stops at many of the main tourist spots, it does take around 1 hour and 20 minutes to get to the onsen (hot spring), or 1 hour and 15 minutes by express bus.

Shiraito Waterfall is roughly 3 meters tall and 70 meters wide. Wide waterfalls like this are rare in Japan, and this one is particularly quiet and safe, allowing visiters to get closer to the waterfall than most.

Mt. Asama is an active volcano that sits between Nagano and Gunma prefectures. It measures to be around 2,500 meters tall, and is also counted as one of Japan's top 100 mountains.

Kusatsu Onsen in Gunma is one of the 3 most popular hot springs in Japan. With a history dating back to the 1500s, it is loved by both the Japanese and people all over the world.

Onioshidashi Park was formed in 1783 when Mt. Asama erupted and the lava cooled to form strange-looking rocks. The name is thought to have come from the severity of the eruption at the time, as it was described to be as if oni (demons) lived there. To prevent such a disaster from happening again, they had to oshidashi (kick out) the oni.

Manza Onsen is the hot spring with the highest altitude in Japan, located 1,800 meters above sea level. It is a sulphuric hot spring averaging 80℃, giving it a distinct smell.

Mt. Kusatsu-Shirane is another active volcano with an approximate height of 2,160 meters above sea level. There are a few volcanic lakes near the peak, and the biggest of these, Yugama, is beautifully blue and thus very popular with tourists.

With that, this guide to buses in Karuizawa has come to an end. The town of Karuizawa can be very different from area to area, so make sure you don't miss out and take the bus to visit all the places in this article!