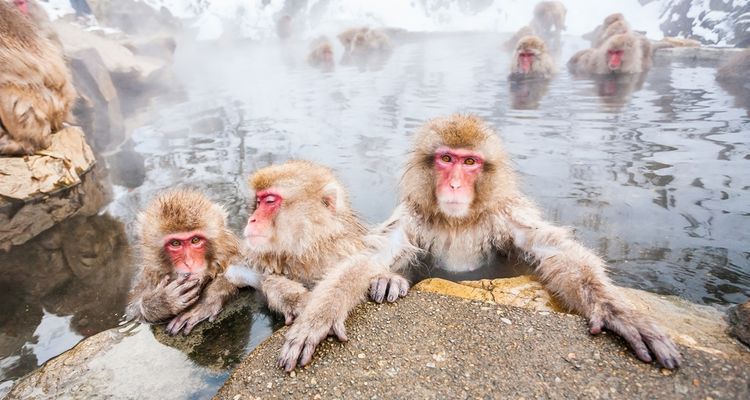 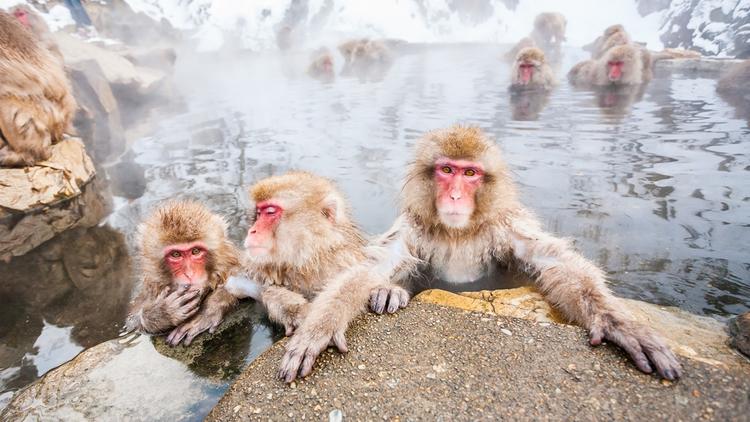 Looking for a unique nature experience during your trip to Japan? In a remote valley tucked away in the mountains, you can encounter Japanese snow monkeys happily relaxing in steaming hot springs surrounded by icicles and heaps of snow. Normally, these monkeys can be difficult to observe up close in the wild, but at Jigokudani Monkey Park, you’ll be able to watch their adorable behavior as they eat, play, and bathe. Read on to learn everything you need to know about visiting this enchanting nature attraction.

What is Jigokudani Monkey Park? - Take a Peek Into the Monkeys’ Lives in the Mountains!

Nestled between the peaks of Nagano Prefecture’s dramatic mountain ranges, you’ll find Jigokudani: a geothermal gorge where hot spring vapor emerges from the ground and thick steam wafts and winds around the rugged cliffs – a phenomenon that gave inspiration to its name, which literally means “Hell Valley” in Japanese. The high volcanic activity means there’s also plenty of “onsen” (hot springs) in this area, a pleasant pastime that has been discovered and enjoyed by someone other than just humans – namely Japanese macaques, also known as snow monkeys.

Japanese macaques, also known as snow monkeys due to their media association with snowy landscapes, inhabit three of Japan’s main islands - Honshu, Kyushu, and Shikoku. They can be found as far north as the Shimokita Peninsula in Aomori Prefecture, which hosts a harsh winter climate and is also the northernmost part of the world that is inhabited by monkeys.

The monkeys have brown or gray fur, short tails, and pinkish faces. They live in large groups and are incredibly human-like in their behavior and interactions, making them very entertaining to watch. Wild monkeys can be aggressive and cause problems in some Japanese towns, but those living in Jigokudani Monkey Park are generally tamer and very much used to humans. That said, one should of course never try to feed, touch, or get too close to the monkeys here, let alone get in the hot spring with them!

In fact, monkeys have been observed bathing at what is now Jigokudani Monkey Park for many years as a way to stay warm during Nagano’s harsh winters. Surrounded by banks of snow, the monkeys can be seen sitting peacefully in the steaming waters, seemingly enjoying the warmth as snowflakes fall on their faces and melt on the onsen surface on snowy days. You'll also find monkeys relaxing on surrounding rocks and even on the walking paths, which is amusing and adorable, but you do have to be careful to not get too close to them. This is not just to protect them, but you as well, for these playful tricksters grabbing items from careless visitors is by no means unheard of.

The Jigokudani Monkey Park was established in 1964 with two purposes in mind: to create a place where people could observe the monkeys and their curious behavior up close, and to keep the monkeys away from nearby agricultural fields since they get fed every day at the park.

In zoos, it can be hard to observe monkeys’ natural behavior since they’re often enclosed in relatively small cages, and in nature, they can be hard to spot as they often stay far away from humans. In Jigokudani Monkey Park, however, hundreds of monkeys roam freely, and since they’re relatively used to humans, one has the opportunity to watch the monkeys up close as they eat, play, and interact.

Want to Visit Jigokudani Mountain Park? Here’s What You Need to Know!

When to Visit Jigokudani Monkey Park

If you want to see the monkeys bathing, you’ll have to come in winter when it’s cold. There’s usually snow in Jigokudani from December to March, but the best chance to see the monkeys relax in the hot water is during January and February. If you’re not able to come in winter, but still want to watch the monkeys bathe, the park has a live camera next to the pool which can be viewed online. There’s also a small information center at the park, with limited displays in English.

The monkeys do inhabit the area year-round, but they are harder to spot when they do not come down from the trees to bathe. Because of this, binoculars are a good way to get a closer look at the monkeys when they are keeping their distance. Another enchanting season to visit is the spring, particularly late April to early June, which is when many precious baby monkeys are born.

How to Get to Jigokudani Snow Monkey Park

Located in a very mountainous region, Jigokudani Monkey Park is not as easily accessible as many popular tourist attractions in Japan, so make sure you factor in enough time when planning a visit here.

・Access to Jigokudani Monkey Park by Train From Nagano Station

Take the Nagano Dentetsu Line to Yudanaka Station (38 minutes), then board the local bus bound for Shiga Kogen and get off at the Snow Monkey Park bus stop (15 minutes).

Alternatively, take the express bus bound for Shiga Kogen from Nagano Station, and get off at the Snow Monkey Park bus stop (41 minutes).

From the bus stop, it’s a 35-minute walk to the Jigokudani Monkey Park via a pleasant forest trail, and you’ll usually be able to spot monkeys - and sometimes squirrels and other wildlife - along the way.

It’s also possible to access Jigokudani Monkey Park by car, and there’s a free parking lot located near the Snow Monkey Park bus stop at Kanbayashi Onsen. There’s another parking lot (500 yen per vehicle) located closer to the park entrance, but the road here is narrow and closed in winter.

If driving, keep in mind that Nagano Prefecture sees a lot of snowfall every winter, so prepare accordingly.

Other Things to Do Around Jigokudani Monkey Park

Since Jigokudani Monkey Park is located in a slightly remote area and many people like to visit here in winter to observe the snow monkeys bathing in the hot springs, a trip to the park can ideally be combined with an action-packed ski holiday at one of the area’s many outstanding ski resorts.

In fact, Nagano hosted the Winter Olympics in 1998, and the snow here is generally abundant and of high quality. Nearby Shiga Kogen is one great option, and so is Nozawa Onsen which is known not only for skiing, but also for its many public hot spring bathhouses.

For a more relaxing option, opt for a stay in a traditional ryokan to enjoy the steaming onsen to the fullest - just like the snow monkeys! Korakukan is a historic hot spring ryokan that opened in 1864, and it’s the place of accommodation located closest to Jigokudani Monkey Park.

For a slightly less rural experience, opt to stay in nearby Shibu Onsen or Yudanaka Onsen. Shibu Onsen is one of Nagano’s oldest onsen towns with a history of more than 1,300 years, which is famous for its nine public bathhouses and many hot spring foot baths. Yudanaka Onsen, located next door, might lack the historic charm of its neighbor, but there are many great ryokan inns and guesthouses with outstanding baths and great hospitality here. And there’s even an onsen at the town’s train station!

Other Places to See Japanese Macaques

If Jigokudani Monkey Park doesn’t fit well into the rest of your itinerary, there are other places to see Japanese macaques, although they may not offer the same unique sights and experiences as Jigokudani Monkey Park. One option is the Arashiyama Monkey Park Iwatayama in Kyoto, another is the Takasakiyama Natural Zoological Garden in Kyushu’s Oita Prefecture.

If you prefer to see the monkeys in the wild, going on a hike is a good option since you’ll often be able to spot monkeys in mountains and forests across Honshu, Kyushu, and Shikoku. Mount Takao is one such hiking spot, conveniently located only a few hours from downtown Tokyo.

Remember to always keep your distance, and never try to touch, catch, or feed the monkeys. Also, keep an eye on any food you might have with you, since monkeys stealing snacks and lunch boxes from hikers is not unheard of.

Japan doesn’t offer many opportunities for close animal encounters in natural surroundings, but Jigokudani Monkey Park is an amazing exception. You will surely enjoy watching the entertaining and playful behavior of the Japanese snow monkeys, and nowhere else will you be able to observe their unique bathing habits as they soak in the steaming hot springs surrounded by dramatic mountains and pristine snow. Combine your visit with a stay at a nearby ryokan for an immersive, only-in-Japan experience!