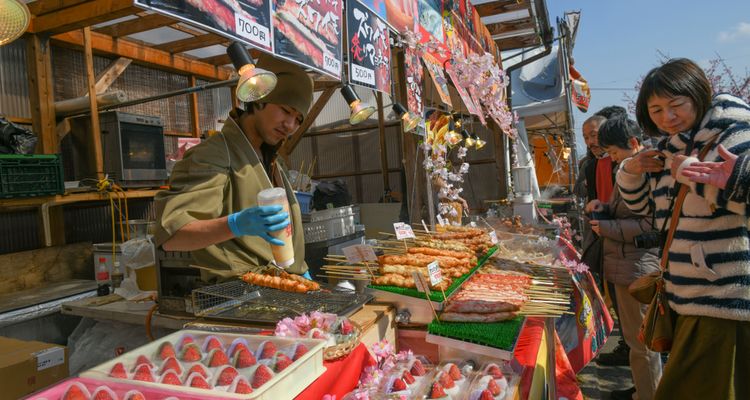 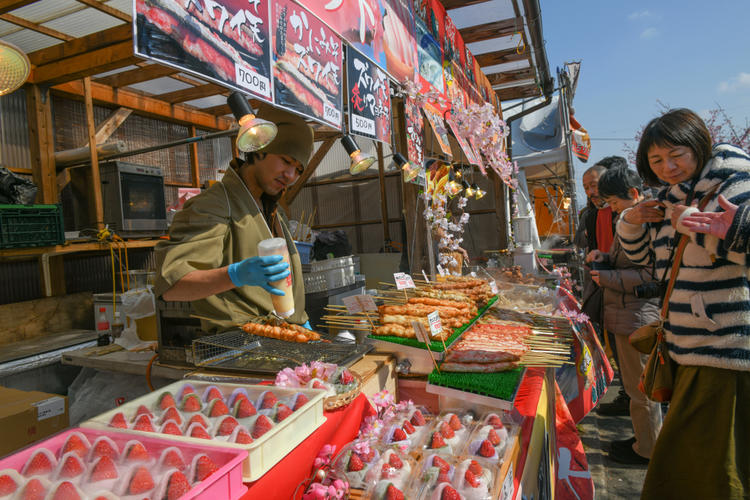 When you visit a local Matsuri festival, maybe you should try some of these foods!

Smoke rises from a fish gridiron. And it smells so good. How can you resist its attraction ? It's cooked with soy sauce on a grid. Sometimes it's served in many izakayas,Japanese pubs, too. Maybe squid on a stick is served entirely without removing intestines or ring-shape cut from the body. It goes well with mayonnaise.

If mixed hot peppers (Shichimi Tougarashi : photo on the left) are available, you can add them to mayonnaise.

There are many festivals in summer, and at that time Indian corns are in season. Like grilled squid, grilled Indian corns are grilled on a gridiron with soy sauce. It's served on a stick, too. This is one of my favorite foods at festival. Last year I ate two Grilled Indian corns on sticks because locally grown corns were nice and sweet. I'm looking forward to the local matsuri!

One of the most popular foods at Matsuri is Yakisoba, grilled noodles with Japanese Worcester sauce(commonly just called "sauce") and some vegetables such as cabbage and onion.What are those on the noodle ? Well, green powder on the top is "Aonori", green dried seaweed. Vivid red thinly cut stuff is called "Beni shouga", red pickled ginger.

Okonomiyaki is also one of the most popular foods at Matsuri, made from various ingredients including flour and vegetables. It also uses "Sauce", Japanese Worcester sauce and mayonnaise.
The Hiroshima-style Okonomiyaki includes noodles and the ingredients are layered rather than mixed.

Kansai or Osaka-style Okonomiyaki's batter contains flour and grated Nagaimo-yam to soften its texture. Unlike Hiroshima-style, ingredients are mixed.

Takoyaki is made from wheat flour, minced octopus (tako,) thinly sliced red pickled ginger,green onion. And the "sauce" makes it complete.Did you know ? Urban legend has it that every family in Osaka has a Takoyaki pan because they love to make it. Based on my personal experience, this legend is so far so true !

Its fluffy texture and the magic of making of cotton candy is definitely unique to Matsuri. I haven't seen Wata Ame aside from Matsuri, so I assume it's one of festival things. Not only its taste but also its bag make us fun because of various characters from animation. It's so colorful, and kids bringing those cotton candy are so adorable. It's often packed in animated plastic bags.

It looks tasty and reminds me of Matsuri. It have a place in my memory as a festival food. I assumed it originated in Japan, but actually it's from North America. Also known as toffee apples are whole apples covered in sugar candy coating on a stick.

Shaved ice is finely crushed ice with colorful syrups. For example, strawberry, melon, lemon, green tea, orange and blue Hawaii(a tropical cocktail). This is one of my American girlfriend's favorite foods. She misses it even in winter !! Maybe we should buy a hand-powerd ice shaver !