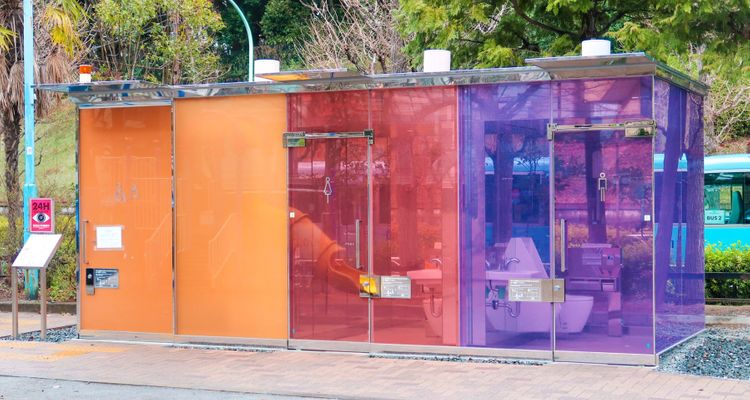 The Tokyo Toilet project is taking public toilets to a whole new level by working with a variety of creators to redesign 17 public toilets in Shibuya. These stylish new designs turn public necessities into works of art intended to be accessible for all.

The Tokyo Toilet Project Is Much Prettier than It Sounds

In the bustling streets of Tokyo, there are some big and exciting changes being made to the humble public toilet. Working with experienced and award winning creators, the Tokyo Toilet project is redesigning public toilets in 17 locations in Shibuya, and turning them from bland necessities into works of art in their own rights. We’re talking everything; from toilets inspired by traditional Japanese decorative folding to fully voice automated facilities and even toilets with glass walls, these are public toilets you’ll actually want to use. Keep reading to find out more about these incredible designs and where to find them.

This white, spherical building is about as futuristic as it gets. The designer, Kazoo Sato is an award winning creative with experience in a wide range of fields including film, design and promotion. When designing the Hi-Toilet, he and his team spent 3 years researching and planning, before coming up with the concept of a VOICE COMMAND toilet. All of the usual functions in this toilet are activated by voice comments, maximising a sense of hygiene while the unique shape enhances airflow. Fully voice activated and contactless, this toilet gives users a taste of the future.

When the creator of these toilets, Takenosuke Sakakura, took on this project, he hoped to replace the rundown and unappealing toilets with something new, and improve the overall image of the park. Drawing on his vast architectural experience, he has done just that. Inspired by “andon” or traditional paper lanterns that are usually rectangular in shape, these toilets are bright and welcoming, and at night the toilet block lights up and glows gently, really doing its name justice.

Clustered together on the edge of a major thoroughfare these toilets seem as if they are a natural extension of the forest behind them. The designer, Toyo Ito, has a strong background in architecture and has won numerous awards. When designing these toilets, he considered safety and accessibility, connecting them with wide open paths and a dedicated space for the eldery and parents with children.

Located a short walk from Yoyogi Park these fun and futuristic toilets were designed by Shigeru Ban, an award winning architect who is also involved in disaster relief activities. When designing these unique toilets Ban drew on the latest technology to address two key concerns: cleanliness and safety. The exterior glass of these toilets is transparent until they are locked, allowing users to tell if someone else is inside, as well as gauge how clean the toilets are.

The creator behind these toilets, NIGO®, is not only involved in fashion design but is also the creative force behind a curry restaurant called CURRY UP®, and a sake brand by the name of SAKE STORM COWBOY. The concept behind this sweet and unassuming toilet block is “learning from the past” and it was meant to contrast with the busy high-rise cityscape surrounding it. Don’t be fooled by its old homey look, accessibility and ease of use were the top priorities in this design.

These sleek toilets can be found in Jingu-Dori Park and were designed by Tadao Ando. Ando is a self taught architect with an impressive resume of works, awards and professorships including professor emeritus of the University of Tokyo. When designing this toilet he wanted to make a “place” of public value that feels comfortable and safe. Its cylindrical design allows users to feel the wind and light of the surrounding park.

A Walk in the Woods

In his architecture, Kuma’s designs draw on the local environment and culture, and that couldn’t be more true of this design. Set in the lush and green Shoto Park, this “toilet village” is separated into five huts, each intended to serve different needs, and connected by a “walk in the woods.” Inside, users will find a continuation of this theme in the unique woodwork on the walls.

Nao Tamura is a multi-disciplinary designer who has been involved in the creative communities in both Tokyo and New York. When designing this eye-catching toilet, Tamura thought of the LGBTQ+ community and the need for safe places for all. Inspired by “origata”, a traditional Japanese method of decorative wrapping, this toilet seems to fold itself neatly into a small space and yet it stands out thanks to its bright red colour, just as Tamura intended.

Passersby would be forgiven for thinking that this toilet is not a toilet at all. In fact, that was the aim of creator, award winning interior designer, Masamichi Katayama. He drew inspiration from Japan’s earliest toilets, huts called “kawaya” that date back to Japan’s early Jomon Period (10,000 to 6,000 BCE). The design utilises concrete walls to create an ambiguous design that fits easily within the park as though it belongs there.

This pure white toilet block almost appears as if it is floating outside Ebisu station’s West Exit. It was designed by Kashiwa Sato, a creative director who has worked with many recognisable entities such as UNIQLO and the Cup Noodles Museum. Prioritising cleanliness and safety, Sato wanted to design a facility that was inconspicuous given its prominent location. This simple yet stunning design was intended to make passersby feel brighter and fresher.

The story behind this toilet’s name is cuter than you might think, it's in fact a reference to the fact that Ebisu East Park is also called “Octopus Park” thanks to its octopus shaped play equipment. It was designed by Fumihiko Maki, an award winning architect who wanted the design to include a pavilion and rest area. He hopes that this design will become a popular addition to the friendly neighbourhood park.

The list doesn’t end here, there are still 5 more locations across Shibuya scheduled to be completed this year. Information about the designs hasn’t been released yet, but based on what we’ve seen so far, we’re excited to see what’s in store. If you’d like to keep up to date with the project visit the Tokyo Toilet Website.