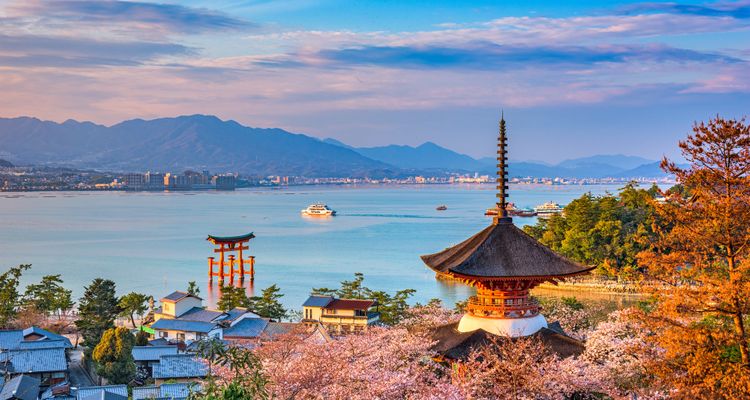 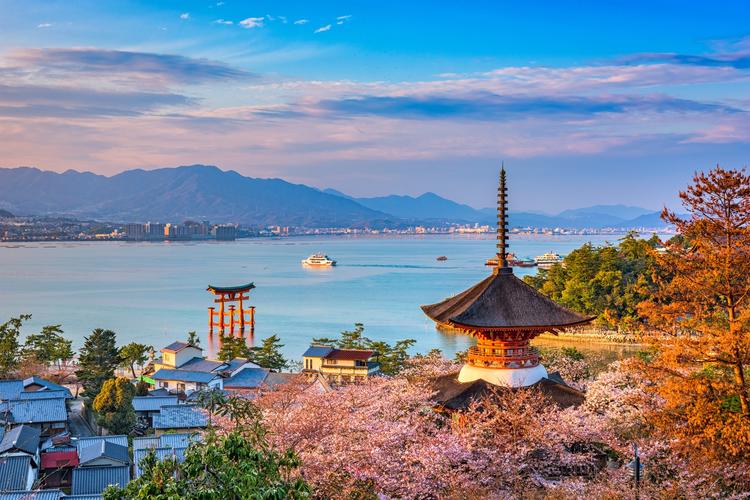 Hiroshima is visited by many tourists yearly and it has plenty of cuisine and sightseeing spots. However, why not go during cherry blossom season to see the beautiful flowers? Please discover your favorite cherry blossom spot. Hiroshima's Peace Memorial Park is an area visited year around by many people. It's a large park with about 300 Yoshino cherry trees. You can enjoy taking a ride on the water taxi Gangi Taxi or take a pleasure cruise, so you can enjoy a different style of hanami (flower viewing) from the water. This park is surrounded by the Ota and Yasuda Rivers, so you can enjoy a leisurely hanami from the waterfront. You can enjoy the sakura (cherry blossoms) as you take a walk around the park, so it's great to go for sightseeing as well. Since it's a famous sightseeing area, it's easily accessible and is a great hanami spot for beginners. This is a verdant area in the western part of Hiroshima near the center of the city. Hiroshima Botanical Garden has an observation area where you can see the Seto Inland Sea. As expected from a botanical garden, there around 300 sakura trees of about 70 varieties that you can enjoy between late March and early May. Also, within the wide grounds, is a large greenhouse, a cactus green house, a flower evolution garden, and other facilities. There is about 200,000 kinds of plants of 10,000 varieties cultivated here, so it's irresistible for people who like plants. During the annual Sakura Matsuri festival and the Sakura to Hikari no Yuube event, the grounds are lit up between 4:30PM～9:00PM, so you can enjoy the sakura in a different way than during the day. The most famous part of the Sakura Matsuri is the Bonbori no Yaezakura Meiro. Yaezakura are double-flowered sakura trees and bonbori are paper lanterns. They're put together to create a maze that will envelope you in warm light. Various events are held during the festival and special booths sell all kinds of cuisine, so please check what's available before hand!

（During the event, there will be lit-up sakura trees, huge illuminations, the Bonbori no Yaezakura Meiro, and more) Ebayama Park is famous for its huge Hiroshima Ebayamazakura, a city designated natural monument that's around 160 years old and 14m tall. It has anywhere between 5-13 petals when usually there are only 5, and it's a very rare type of sakura, so many people come from far away to see it. When it's in full bloom, it's impressively voluminous with flowers. There are 3 young Hiroshima Ebayamazakura planted by the Hiroshima City Ebayama Museum of Meteorology, so don't miss that. The sight of the natural monument Hiroshima Ebayamazakura lit up at night is magical. Also in the park are other varieties like Yoshino and weeping cherry, so a beautiful Japanese night awaits. Hijiyama Park is famous for its sakura, and has a small hill of 70m where you can overlook the city of Hiroshima and the Seto Inland Sea in one fell swoop. When the sakura are in bloom, around 1,300 Yoshino cherry trees paint the park in the colors of spring. Every year when the sakura is in full bloom, they light up lanterns so you can enjoy the blossoms after dark. Also, you can see the beautiful nightscape of Hiroshima from the observation deck, and it's a very romantic scene. It's not far from Hiroshima Station, so you can spend a lovely leisurely time here surrounded by nature. Mihara is in the eastern part of the prefecture and is 20 minutes away from the city of Hiroshima by shinkansen. Mitsuki Hachimangu has 10 weeping and double weeping cherry rosebud trees that are over 200 years old, as well as around 1,500 Yoshino and double-flowered cherry trees, so it's famous for hanami. Also, the main building of the shrine was built in 777 (and was later renovated and had additions attached), and it's said that the sakura was planted by Toyotomi Hidetoshi (1537? - 1589), the man who united Japan, so it's an ancient temple with a long and honorable history. If you walk a little, you can reach the Yanatagawa Jizen Park and Mihara Takasaka Jizen Kyuuyoumura campground, so you can enjoy that when you're finished with hanami. They still continue to plant new sakura, so you can enjoy the sight of both young and old sakura mixed together. It takes a little bit of time to get there, but it's a great hanami place for people that want to enjoy a true Japanese atmosphere. It may be more suited to people who have had hanami experiences before. This is another recommended spot in Mihara. Mt. Fudekage has an elevation of 311m, and during hanami season, the entirety of Setonaikai National Park becomes covered with the blooms of around 2,000 Yoshino cherry trees. You can see some of the islands in the Seto Inland Sea from the observation point on the mountain summit, so please enjoy the beautiful view framed by sakura.

When the sun goes down, the sakura has a different beauty to enjoy. During the season, the area near the observation point is lit up between 6:00 PM - 9:00 PM. Also, at Kou Jinja to the south-southwest of Mt. Fudekage (4 Saizakikuwaki, Mihara-shi, Hiroshima/Google Map) there's a huge sakura tree that's said to be a hundred years old. It's lovingly called the "double-weeping rosebud cherry tree of Nobori-cho," so if you have time, please check it out.

Access: 30 minute taxi from Mihara Station or an hour walk from Sunami Station (including a 3.8km hike) Fukuyama is in east Hiroshima, about 30 minutes away by shinkansen from the city of Hiroshima. The most recommended area for hanami here is Fukuyamajo Park, which spreads around Fukuyama Castle. The castle was finished in 1622 and was rebuilt in 1966. This area is a popular hanami spot, with about 500 trees including Yoshino, mountain, and satozakura cherry trees until the castle is surrounded by the colors of spring. During the season, the trees are lit up from sundown to 10:00 PM. While Fukuyamajo Park is nice during regular hours, it's exquisite during sakura season. It's easily accessible from the station, so it's great for people that want to easily enjoy the Japanese sight of a castle towering among the cherry blossoms. Miyajima, also known as Itsukushima, is famous for being a World Heritage Site. It's full of people year round, but it's especially recommended to go during sakura season. There are about 1,900 trees on the island, so it becomes one big hanami spot where you can enjoy a pink atmosphere full of Japanese aesthetics. This is the view of the Tahoto pagoda. It's a great photo spot with the sakura, Itsukushima Jinja, and the big torii gate floating in the blue sea just below. Sakura bloom near the five story pagoda as well, so you can enjoy their beautiful combination. There's also the Uguisu Road, a natural path, and Omoto Park. Omoto Park is a little far, but it's not very crowded so it's great for hanami. The path to Itsukushima Jinja is lit up by lanterns at night, and it's a fascinating site. Itsukushima Jinja, the five story pagoda, and the torii gate are all lit-up. There are fewer people on the island at night, so you might even be able to enjoy the sight alone. If you can, stay on Miyajima, and enjoy the varying views of the island during spring at night, early morning, and dusk. It takes a little time to reach, so please go with time to spare. Onomichi is sandwiched between Mihara and Fukuyama, and is a famous sightseeing area with a traditional townscape. It's about 30 minutes from the city of Hiroshima via shinkansen. Senkoji Park is on the summit of Mt. Senkoji, which has an elevation of 144m, and it's a popular hanami spot that's considered one of Japan's top 100 hanami areas. The view from the observation point is impressive. You can see all of Onomichi, as well as the beauty of islands spotting the Seto Inland Sea. About 1,500 Yoshino and double-flowered cherry trees bloom here for a beautiful sight. During the peak period, they're lit up between 6:00PM～12:00AM by lanterns, and by lights until 6:00AM the next day, so you can be fully satisfied by the beautiful night sakura. The entirety of the park is lit up by paper lanterns. You can enjoy an even more beautiful, romantic time here at night. It's great for people that want to leisurely enjoy the night sakura.

Access: A 15 minute walk from Onomichi Station, followed by a 3 minute ride on the ropeway from Senkoji Ropeway Sanroku Station Sera is almost in the center of Hiroshima, southeast of the city. It takes about 2 hours to get there from the city of Hiroshima, but the weeping cherry-lined road in the Sera Kouzan Fureai no Sato is one of the country's leading hanami spots. There are also Yoshino and double-flowered cherry trees here, but the weeping cherry trees are a must-see. The gorgeous sight of them hanging down accompanying you makes for a perfect leisurely walk.

During the season they hold the Sakura Matsuri festival, and you can buy bento meals or souvenirs and have lunch in your favorite spot. It's also lit up during the season. It takes a little while to reach the area and you have to switch trains a few times, so it's recommended for people who are used to traveling in Japan, but it's definitely wonderful if you love weeping sakura trees.

[About Sera Kouzan Fureai no Sato] Kure is in the southeastern part of the prefecture. It's about 30 minutes via express train from the city of Hiroshima, so it's easily accessible. The recommended park, Ondo no Seto Park, is a park that sits between the two bridges of Ondo Ohashi and Daini Ondo Ohashi, so you can see a view of the Ondo no Seto strait between the mainland island of Honshu and Kurahashi Island. From the Takanari observation point, you can enjoy the sight of the Akinada Sea and various islands behind the sakura. The sight of the bright red bridges and the sakura make for a wonderful sight. There's a facility in the park called the Sakura no Sato with about 1,100 trees of 5 varieties that you can leisurely enjoy. From late April to early May about 5,300 azaleas bloom, and that's also a recommended sight.

[About Ondo no Seto Park] Akitakata is in the northern part of the prefecture, and takes a little less than an hour to reach from the city of Hiroshima. It's an area surrounded by nature, and the most recommended spot for hanami there is Hachiyo Lake/Haji Dam. There are around 6,000 trees around the lake, so it's one of the leading spots in the prefecture. There's also a 3.7km bike path available where you can enjoy cycling on rental bikes (450 yen for adults, 250 for children, 900 for a tandem bike, all for up to 4 hours) beneath the sakura. Other than the bike path, if you head to the prefectural roads that have pedestrian paths, you can enjoy cycling 20km around the perimeter of the park. During the sakura season, Nodokoe Park in the northeastern part of the lake sets up around 400 sakura lanterns, so don't forget to check that out. However, since it's difficult to reach the lake by bus or train, it's recommended for people who can rent a car.

Access: 10 km down prefectural road 5 towards Haji from the Chiyoda interchange (parking available; free on weekdays, 500 yen per car on Saturdays and Sundays)

All of these hanami spots offer beautiful sakura in various scenarios, including some that can only be found in Hiroshima. These sights are only available once a year, so more the reason to check them out if you visit Hiroshima during the proper season. Please enjoy the beautiful sakura to your heart's content!