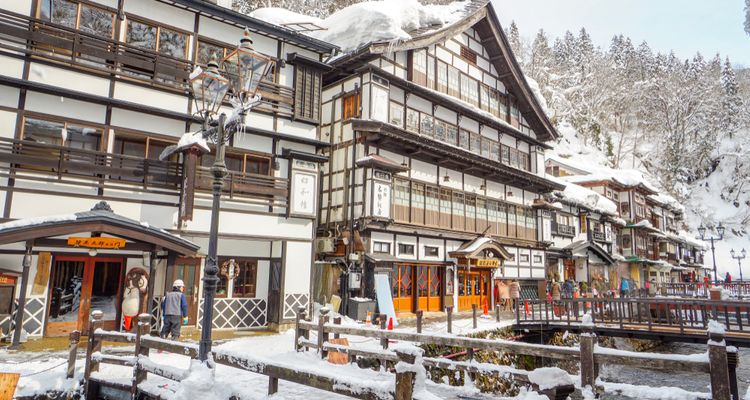 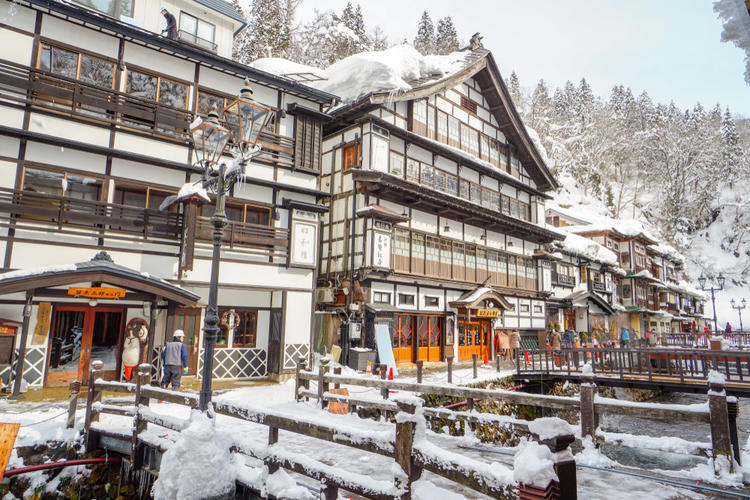 Every year some 2 million people flock to the city of Sapporo in winter to catch a glimpse of the many ice sculptures that are on display. While these ice sculptures are no doubt impressive, you may find yourself wondering what else there is to see and do in Northern Japan. Fear not! The north of Japan is rich with places to visit and things to do during the winter months, many of which can be found on the main island of Japan. Read on for our picks of destinations for a true Japanese winter experience.

Head up into the snow-capped hills of Aomori Prefecture and you may find yourself coming face to face with monsters, albeit ones that won’t eat you. Juhyou, or ice-covered trees, are a rare sight due to the specific weather conditions required for their appearance. The north of Japan is one such place where these conditions exist to produce these figures, which are said to resemble monsters when encountered on some of the mountains near Aomori City. The best place to witness this natural phenomenon is on the slopes of Mount Hakkoda, which is accessible by a bus from Aomori Station that stops at the Hakkoda Ropeway.

While you’re in Aomori, be sure to take the chance to visit the Nebuta Warasse Museum, which is located just a few minute's walk from the station. Inside this building you'll find the giant illuminated floats that are paraded through the streets every year during the town’s Nebuta Matsuri festival. If you head there on the weekend, you’ll also be treated to live performances of the city's famous Nebuta dance.

2. Take a Stroll Through the Hirosaki Castle Ground Illuminations

Castles in Japan are pretty – no doubt about that – however few can come close to the breathtaking atmosphere that surrounds Hirosaki Castle during the cold winter months. The best time to visit is in the early evening before the sun sets, so you can watch the grounds light up with the setting sun. Watch as the castle grounds slowly comes to life with a range of purple and blue illuminations from lights that are hidden in the snow during the day.

In addition to this fantastical glow, hundreds of small snow lanterns are lit up around the park, and the Tsugaru-Nishiki-e Cloister displays a variety of Japanese artworks inside an icy walkway. If you’re looking for a romantic activity for couples, this is the place to go in Hirosaki.

3. Play with Fire at the Kakunodate Fire and Snow Festival

Despite the age-old warning against playing with fire, the people of Kakunodate have respectfully declined such advice and instead celebrate winter in one of the most exhilarating ways possible: by swinging a large flaming bale of hay around their heads while the fire eats away at the rope. What’s more, the locals here are especially friendly to those that take the time to visit their celebrations, and they will warmly (no pun intended) invite you to join in with their celebrations along the riverbank and swing your own ball of fire. The laid-back attitude of the town acts as a perfect example of why a festival held in a big city isn't always better!

The festival begins once it starts to get dark at around 5:00 pm and continues until late. Once you arrive in the town, follow the orange glow in the distance to get to the bonfires. They won’t be hard to spot.

Ginzan Onsen is perhaps Japan’s most strikingly beautiful onsen town, and it transforms into something even more special upon the arrival of the snow. Historical onsen buildings watch over the main street, which runs alongside a river that cuts through the town. Many of these buildings, such as the Notoya Ryokan, bear a close resemblance to the onsen featured in the Studio Ghibli hit Spirited Away.

Even if you don’t want to pay to stay in one of these private lodges, there are still public baths to relax in as well as several footbaths located along the main street. Be sure to stay during the twilight hours as the town really comes into its own once the various buildings begin to light up.

Maybe lazing around in onsen is less your thing and you consider yourself more of the adventurous type instead. Located in the hills of Yamagata Prefecture lies the perfect challenge for you; while the 1000 steps that lead to the mountaintop temple of Yamadera are no problem during other times of year, the winter period brings with it a blanket of snow that makes climbing to the top both a challenge and a reward. Once you reach the peak, you’ll be met with a sight like something out of a fantasy novel: a thousand-year-old temple complex that looks out over the misty valleys below. Don’t take our word for it – the famous Haiku poet Basho wrote one of his most well-known works there in the 1600s describing the silence he felt in the area. This is something you can’t read about: you’ll have to experience it to believe it!

The Yokote Snow Festival has a range of winter treats in store for those travelling to the city. For starters, the kamakura snow igloos are occupied by various families that will invite you in to drink amazake (a warm, sweet, low-alcohol version of sake) and eat mochi rice cakes with them. These huts traditionally house a shrine to a Shinto water deity, which means that you can also take up the opportunity to pray for a safe winter and plentiful harvests after filling up on warm food and drink.

The huts are spread out throughout the city in a number of clusters, but are easy to find thanks to the work of the town’s children who serve as guides. After all this, wander over towards the riverside or the Minami Elementary School to catch sight of hundreds of downsized versions of the igloos that house small candles, lighting up the front of the school in a mesmerizing display of small flames flickering in the darkness.

7. Get Up and Close to the Zao Foxes

It’s well known by now that Japan loves its cute animals, and the playful foxes of Zao Fox Village exemplify this perfectly. Foxes, called kitsune in Japanese, often appear as tricksters in Japanese folklore, and when you meet this lively bunch you might get a sense of why! The foxes at this farm have no problem with visitors getting up close, especially if they have some food for them!

Not all of these guys behave the same, however. Some of them are energetic, while many others are incredibly relaxed, and it’s these foxes that the staff will be happy to let you pet for a small fee. Even if you don’t feel like getting right up close and personal with one of these foxes, the feeding station will attract plenty of eager foxes should you bring them a bag of feed available to purchase on-site. While open all year round, the autumn to winter period is the best time to visit as the foxes are at their fluffiest with their thick winter fur.

8. Gaze up at the Ouchijuku Fireworks

Aizu is one area of stunning Fukushima Prefecture, and is in its own right a scenic treasure. We could write an article on all the things there are to see and do here just during winter alone, but the fireworks that light up the historical 17th century post town of Ouchijuku makes for a truly special moment.

Whatever time of the year you visit Ouchijuku you can take in the town's rich heritage by stepping inside any one of the historical buildings lining the main road. The Machinami Tenjikan Town Exhibition Pavilion houses various Edo-period tools and artefacts inside an old lodge formerly used by traveling lords, and an array of restaurants provide plenty of choice when it comes to sampling the local cuisine. Be sure to try your hand at eating soba noodles the local way, by switching your a pair of chopsticks for a leek, and have a taste of locally caught char fish cooked over an open fire.

As evening approaches, look up to the sky to take in the firework display that lights up the town amidst the dark nighttime backdrop of snow-covered mountains.

While the world famous sculptures at the Sapporo Snow Festival may be the most famous winter attraction in Northern Japan, limiting yourself to this one festival would be to miss a completely different side of this beautiful part of the country. With these eight locations as a starting point for a magical winter journey in northern Japan, why not take the plunge and discover what rural Japan has in store for you?